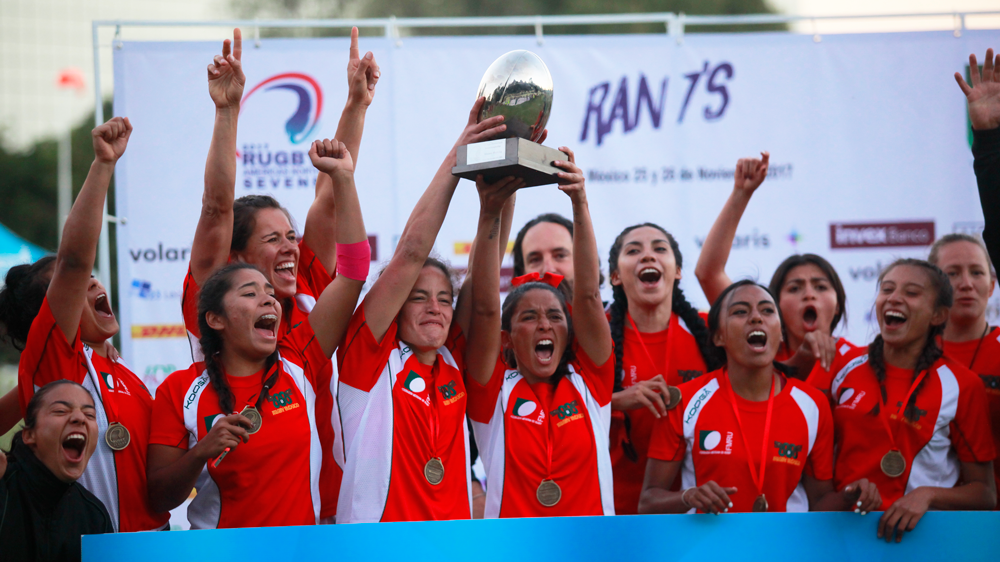 Ahead of the 2018 Rugby World Cup Sevens, México is strengthened by its Women’s Rugby team making history and creating change across the North American nation.

México earned their placement at the 2018 Rugby World Cup (RWC) Sevens through a victorious Rugby Americas North (RAN) tournament in November of 2017. Defeating Trinidad & Tobago in the final match of the tournament meant instant qualification for the upcoming World Cup, a feat never before achieved by any Méxican National Team. The seventh RWC, third for women’s teams, is set to take place this summer. Teams from around the world will descend upon San Francisco, California, USA for three tournament days of a single elimination format. From July 20th through 22nd, the RWC will host 16 women’s teams in their pursuits of World Cup glory.

The RAN tournament, played at Campo Marte in México City, was the site of México’s historic victory and fierce competition for sevens rugby. For México, the stakes were markedly high with an opportunity to take hold of the World Cup qualification that no other Méxican National Team has ever acquired in all of rugby history.

México hosted their very first National Championships in March of 2014, showcasing the growth of women’s rugby within the country. That same year, the International Rugby Board showcased México for its international growth. The team, having advanced 14 spots in their international ranking over the course of a single year, received accolades for accelerating their global placement.

In a 2014 interview, then captain Michelle Farah Chalita discussed the growth of Méxican women’s rugby. She commented on the number of women playing rugby and the increase in numbers from 100 players to over 1,000 in just a few years time. Now, México boasts over 50 teams within their national pool and thousands of players building the women’s game.

Robin MacDowell, Canadian native, holds the prestigious role of Head Coach for the Méxican Women’s National Team. Formerly the team’s assistant coach, MacDowell was handed the reigns at the start of 2017. Just months later he would lead the team in their RWC qualification victory. Dubbed ‘Coach Loco’ by his Méxican players, MacDowell is confident in the team’s ability to take on the ‘tall order’ of this year’s RWC schedule.

Traditional Méxican culture has shifted over the past decade in its expectations of women. For México, some of these changes can be attributed to the growth of women’s rugby within the country. Historically assigned the role of household leader, many women in México have pushed against this boundary in their individual circumstances. The explosion of rugby across the country has given new rise to an expanded understanding of Méxican women both in sport and in life.

“Some of these girls whose families didn’t support rugby…have really opened up since their daughter’s have qualified for the World Cup,” observes Coach MacDowell. He goes on to note that the cultural shift has been huge and is “really empowering for Méxican women, not just rugby players, but for women across México.” The support rugby players are receiving from family, friends, employers and schools is proof of a significant shift for women to pursue their dreams as athletes and ambassadors of México.

“I have no words to express what I feel. I am very excited and I feel very fortunate to be part of this team.” Captain Danny Rosales has been instrumental both on and off the field for México. Rosales, one of dozens of women in pursuit of representing México at the Sevens World Cup, is a portrayer of Méxican culture in its current standing of female opportunity and prowess.

The youngest player on the team has the duty of holding the stuffed team mascot, a snake, throughout the team’s assemblance together. La serpiente is a representative element on the Mexican flag and coat of arms and this mascot connects the team to its home country. The rugby mascot travels with the team and holds patches on its underbelly from places Team México has represented. Looking towards the RWC means yet another significant patch will be placed along the body of la serpiente. Las Serpientes, the nickname for the Mexican National Team, is a way of carrying history and culture across the globe.

With a goal of Olympic qualification, the Méxican Women’s National team came up short leading up to the 2016 Olympic Games in Rio. Lacking qualification did not slow the Méxican women down and with their eyes set on the next great accomplishment, women’s rugby continued to grow in the North American nation. During this rise in competitive successes, Danny Rosales was a young player wearing the Méxican jersey. “You always have to be looking upwards and onwards,” she says during an interview.

Now captaining the Méxican team, Rosales knows that “there are no limits in terms of what you can achieve.” She is leading her team along a path of historical significance, one that will be remembered by players and supporters the world over. It was Captain Rosales who scored the winning, and only, try to defeat Trinidad & Tobago that earned the team their birth at the RWC. Rosales is an integral part of this team and brings with her history and passion for the sport and for México.

.@Rugby_Mexico Women have just arrived in Saskatchewan, Canada after camp in Veracruz, Mexico. 15 players are billeting w/ rugby families and will train at @MacDowellRugby Academy. The team has 6 more camps before they debut in #RWC7s. Stay tuned for more on their prep! pic.twitter.com/bJwDsIVGmH

Team México has a motto. ‘Dream. Believe. Succeed.’ With these three words, their team leadership and Coach Loco at the helm, Las Serpientes look forward to the challenges ahead as they step closer towards their RWC debut.

“This is the most important competition I’ve had in my rugby career,” notes Rosales. Dating back five years, playing in the RWC was only a dream in the eyes of the few international calibre players wearing the México jersey. Today, over 90 women in México sit in the pool of players vying for a spot on the World Cup Team. One element of the dream has come to reality by way of the 2018 World Cup Sevens. The dream continues with sights set on the 2020 Olympics in Tokyo and México’s placement among the 16 qualifying teams.

“I am totally committed to the team and with my teammates, we are working very hard, building to be the best version of ourselves in the World Cup,” Rosales states as the team harnesses their belief into on-field action. With six training camp sessions scheduled prior to the RWC, México believes their preparedness will support them in the tall order of playing the New Zealand Black Ferns on July 20th. MacDowell states his belief in the team readily, “A year ago thinking we would qualify for World Cup was a tall order. Anything is possible.”

“We trust in the process and we know that it will take us to success!” Rosales is confident in her team and their ability to succeed at the RWC. As México continues to break barriers and advance the prospects for women working towards rugby success, leadership has proven a key focal point. “I am confident now in our preparation,” says Coach MacDowell. With two months of training time ahead, MacDowell notes that “success at the international level doesn’t happen overnight,” but that he and the team are “looking forward to the challenge ahead.”

The Future of Méxican Rugby

“The support from the Méxican rugby community has been incredible,” boasts Coach MacDowell. “Our sport is exploding across the country thanks to these inspirational young women!” Rugby is climbing in the ranks of sports notoriety in México as the women’s team approaches their first ever Rugby World Cup appearance. Marked by incredible on-field gains, rugby in México has “gone from zero to 100 in one year,” without any signs of slowing down.

MacDowell shares that the goal of Team México, beyond this year’s RWC performance, “is to qualify for the Olympics…at the RAN 7s in 2019.” As intensive training sessions continue to elevate their rugby game, México builds a strong base for international competition. In the remainder of this year alone, “close to 60 women will play for our Méxican program on the field, based on the amount of competitions that we sought out,” MacDowell comments.

For a sustainable, competitive future of Méxican rugby, Coach MacDowell knows that he and his players are doing everything they can to prepare. Off-field preparations to raise funds for travel and training abroad have become a staple in the daily lives of the Méxican women’s team. Players seek donations from local club teams and take part in countless fundraising events. The heavy fundraising structure will continue as the team works to support their own trip to the Rugby World Cup this summer. Just as their motto entails, México believes that their fundraising goals will succeed, enhancing a rugby culture of enthusiasm and teamwork in pursuit of one common dream.