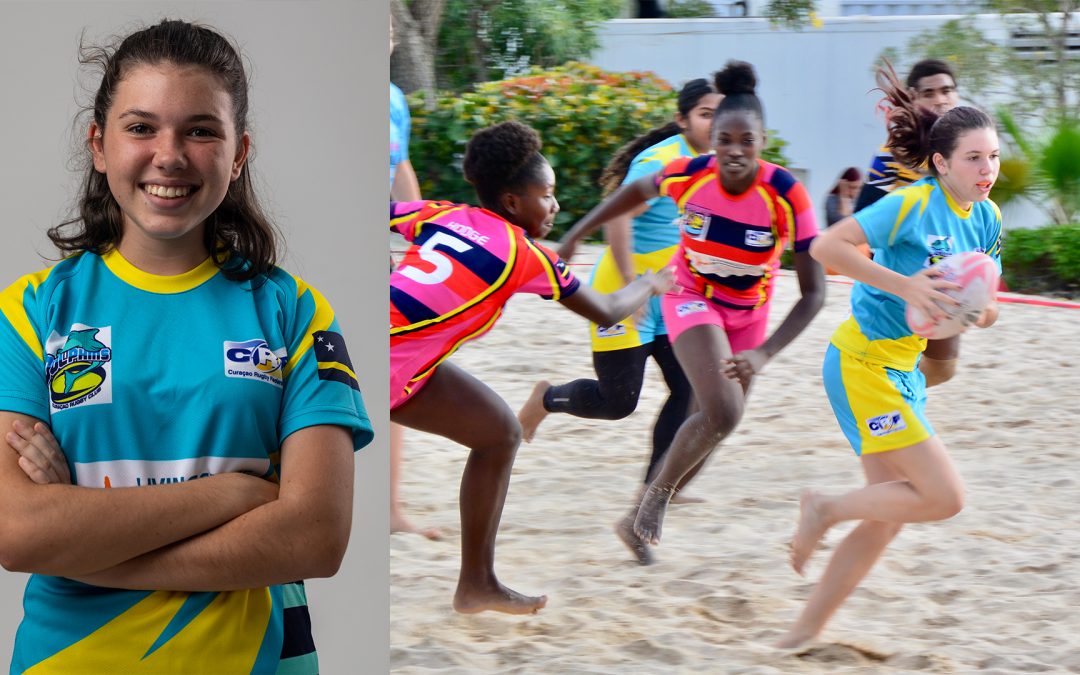 At only 17, Caterina Cergol is making an impact at Curaçao Rugby. Caterina was introduced to rugby at the age of 12 through the Curaçao American Prepatory School and the Get Into Rugby programme. After watching a boy’s beach rugby tournament hosted by her school, Caterina was adamant that a girl’s team be formed. With the help of the Curaçao Rugby Federation, schoolteachers, and Caterina’s determination, women’s beach rugby tournaments became a fixture on the Curaçao Rugby calendar. After proving herself as a crucial member of her school team, Caterina joined the CRF in the hopes of furthering her game and representing her country on the international stage.

For Caterina, rugby is more than just a sport. “Rugby has taught me many things over the years, such as assertiveness, teamwork, and dedication, but what I love most about it is the ability to improvise and come up with different moves on the spot; it opens up so many opportunities in-game and it lets Rugby be an incredibly creative and fun sport. Rugby is a way for me to express myself. The adrenaline, the excitement, the teamwork, and the quick pace all allow me to let loose and express my creativity. It’s also a way to connect with others. When you’re on the field with your team, you’re a family; you communicate through glances and movements, you’re all on the same wavelength, it’s amazing.” 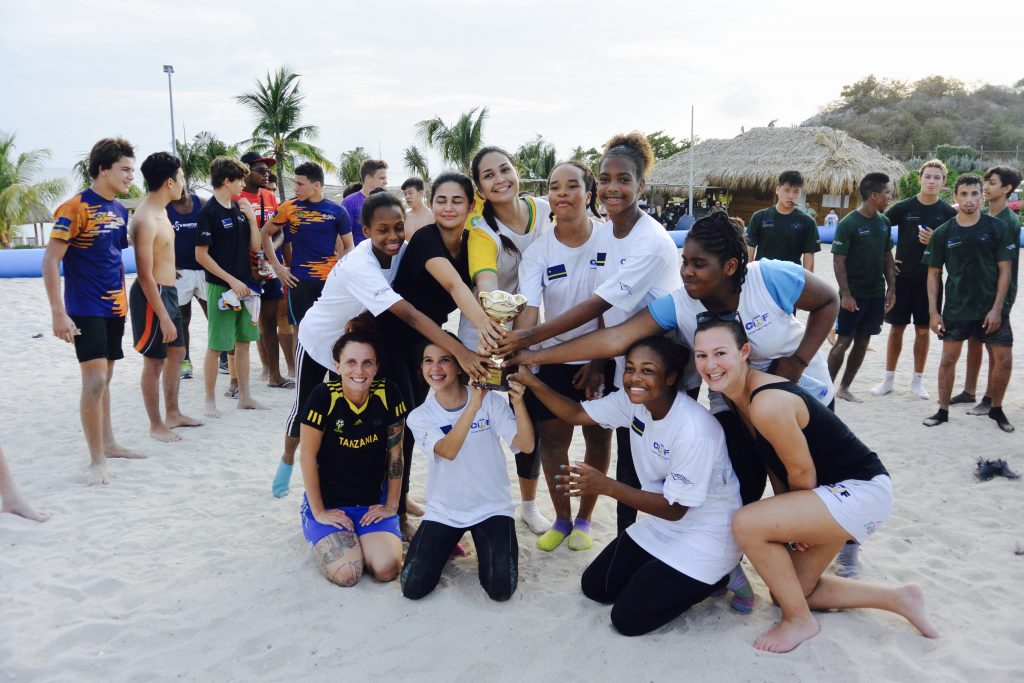 Dedicating herself completely to the sport, Caterina has never missed a training session. Her passion desire to play and appetite to improve are always evident. Settling into the position of Scrum Half early on, Caterina is a force on the pitch, skillfully reading the game, and encouraging her teammates at all times.

In 2018, during the RAN 7s tournament in Barbados, Caterina earned her first cap for Curaçao. Playing every game, and showcasing her talents, Caterina and her teammates played some fantastic rugby and absorbed every development opportunity that was presented to them.

“One of the best experiences of my life was going to Barbados with my team for a RAN 7s tournament. It was my first rugby trip, and I cherished every single moment. The excitement I felt as I ran onto the field for my first ever international game was a feeling that I will never forget, and probably my favorite rugby memory. The bond that we created as a team while on this trip is something that I hold very dearly, we really became a family.”

In the years following Barbados, Caterina has completed her level 1 coaching course with RAN and has since coached the men’s teams in XV aside matches in addition to coaching the Curaçao youth players. She has also earned the position of Club Captain for the Dolphins CRC. Thriving in her new position, she manages social media, assists in running the club in all assets, spearheads recruitment efforts and provides coaching to new players, the latter two of which are probably her favourite part of her new role. 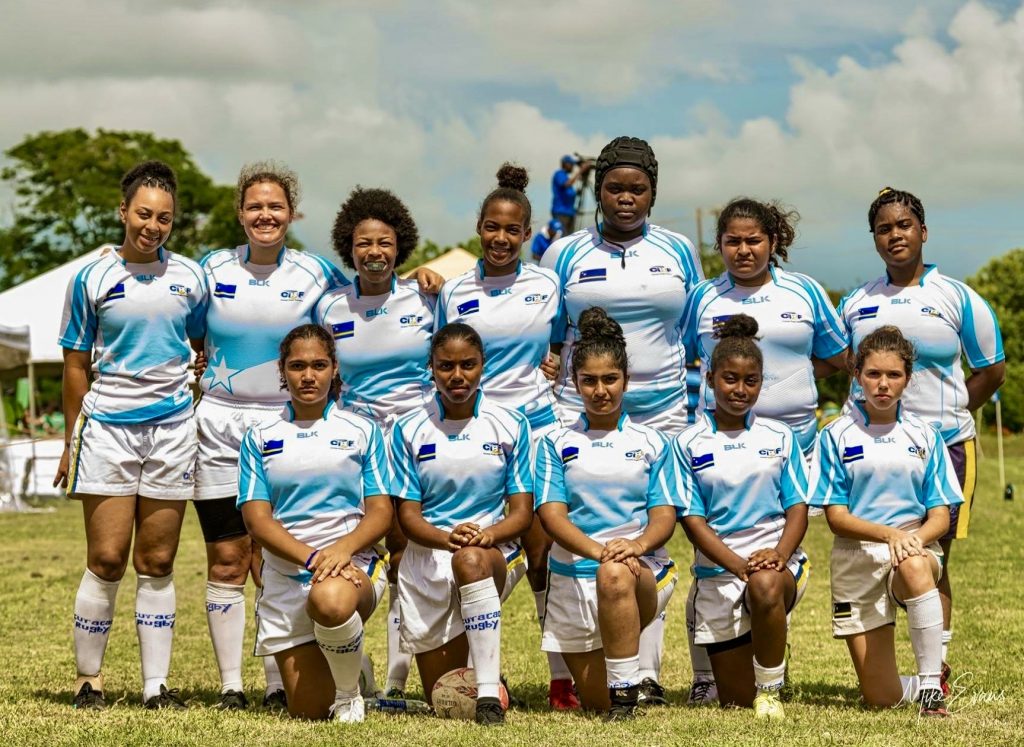 “I love seeing young women joining rugby. Girls are always expected to stay away from “masculine” things such as contact sports, so when they go against these outdated societal norms and decide to embrace their strength and potential, it just makes me so happy. I can definitely say that the women’s team is a very close-knit family, we look out for each other, and we do our best to welcome new recruits as warmly as possible. The most important thing, in my experience, when introducing new girls to the sport is working on their confidence and helping them feel comfortable with their strength and aggression. As soon as that first wall is broken, the rugby experience can really start.”

Embarking for University in the next few years, Caterina is committed to continuing her rugby career both as a player and a coach. “Since I will be moving to the Netherlands for my studies, I am planning on joining a rugby club while attending university. I am not yet sure of which club, since it will have to depend on my choice of university. Wherever I end up, though, I am intent on joining a team to play in. Depending on what opportunities I am faced with, I would love to coach for an elite-level team someday. I think it would be an amazing experience, and I can only hope that if I work hard enough, I will be able to reach it. Until then, I will try to get some coaching experience at a domestic level.”

Looking to the future of Curaçao Rugby, Caterina is confident that an increase in new recruits will help her home nation make a splash in the world of competitive rugby. “Curaçao has such strong potential for rugby, but being a small island, it is simply hard to find new recruits. I hope to see young people’s growing interest in the sport.”