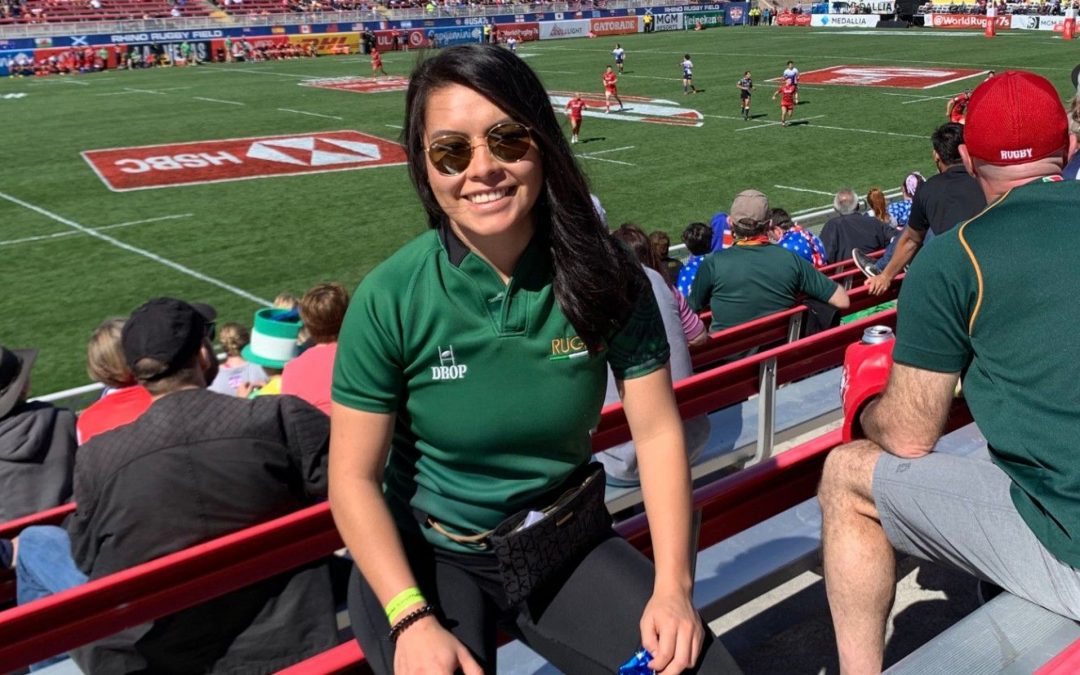 Mexico is a country with a rich history, and since the time of the Aztecs it is one in which entertainment has come in the form of sport.

One of those ancient sports was tlachtli, a blend of tennis, football and basketball in which arms and feet were not used and the losing captain would be sacrificed.

The Aztecs also played ulama as a way to resolve conflicts – land, tributes, commercial and others – without the need of extreme violence.

It is probable that certain elements of rugby would have been part of their sporting activities, although it has taken a very long time for the game to establish itself in a country brimming with beauty and tradition. Rugby was first played in Mexico in 1930.

The global growth of the game has impacted on the country of more than 125 million inhabitants, although it is far from being a massive sport such as football, baseball or other much-followed American sports.

Fernanda Vázquez was not particularly fond of sports. Her first encounter with an oval ball came as a cheerleader of the gridiron team at the Universidad de Monterrey.

But then a second ball made it into her hands as she came across rugby at the Universidad ITAM (Instituto Tecnológico Autónomo de México) in 2013, from where she graduated in Political Sciences.

The university, in the country’s capital, was in the process of setting up their first women’s team and were in search of players.

“I had no idea what rugby was; I did some research and I thought it was violent,” she said as she described how her love affair with the game started.

“My friends convinced me and I gave it a try. It was tough at first as I had never done sports with balls.”

Vázquez remembers that she enquired “why was it that women did not play contact sports?”

She quickly realised there were clear differences between men’s and women’s rugby, even if both genders had their place.

“I quickly found out the difference there is in sports, understanding we don’t always have the same opportunities,” she said.

“Rugby has made some inroads but there is a lot to do and that is a constant battle. They recognise us more nowadays.”

Her lack of physical attributes – “I was unfit and had no skills”, she admitted – did not count against her.

“Rugby gave me a place and I loved it,” Vázquez explained.

“I stated training seriously, got involved with the Wallabies rugby club in 2016 – one of the biggest clubs in Mexico City – even though their women’s team was not fully established.

“Even though we were part of Wallabies we felt like a charity project and they didn’t take us seriously. This made me realise that to be taken seriously there has to be obligations and rewards.”

CARVING OUT A CAREER

The club in the quaint neighbourhood of Polanco started noticing Vázquez’s hard work and they soon invited her onto the committee.

Having realised that her road to the national team would be hard as a player, she understood that she would be useful working on “a strategic plan, setting up goals, searching for resources and ways to make rugby grow in Mexico. I decide to go in search of this success as in rugby this is possible.”

Her university studies gave her the vision of how to build up a market, structure the bases.

“It is important that children chose rugby ahead of other sports. We must work on them as the key to growth,” Vázquez said.

“For that, we need to be able to sell the product. Rugby has visibility and we know it is a fun sport but it is still unknown in Mexico.”

Having said that, Vázquez adds that “there is a change in how sport is diversifying in the country and now is the moment to make it happen.”

In that sense, the Federación Mexicana de Rugby is taking the right steps, and Vázquez has a good working relationship with President Francisco Echeguren, who consults her on the women’s league.

Women’s rugby has taken big steps recently, such as competing at Rugby World Cup Sevens 2018 in San Francisco. Many of the players in that team have since become important figures in the women’s game, working hard to grow its popularity.

Vázquez was a political analyst when she applied for World Rugby’s Women’s Executive Leadership Scholarship, but now wants a career in sports.

Her first activity once she was awarded the scholarship was attending the Women in Rugby Forum run by Sudamérica Rugby (SAR) in Asunción, Paraguay.

“It was a very good experience,” she said.

“I was fascinated by a group of women understanding the challenges ahead, supporting each other and with SAR having a tangible understanding of what is happening with women’s rugby.”

She has since moved to Spain.

“I am now in a six-month Sports Management course at the [Real] Federación Española de Futbol, which is run with FIFA,” she explained.

“I have been in Spain for two months and will be here for over a year.”

She chose the country because of the growth of women’s rugby in Spain, their development and the Liga Iberdrola.

She has taken her rugby boots and is already training with the Olímpico de Pozuelo team, where she might play at hooker or centre, her two positions.

Vázquez said: “I will play, but at the moment I am working in order to understand how they run rugby in Spain.”

She spends most of her time with Patricia García and her charity Rugby Libre which promotes values through rugby, “helping her to make the project bigger, trying to find sponsors and places to take the charity.”

Rugby, she believes, is a good tool to develop women.

“I was quickly very passionate about rugby and sports empowers you,” Vázquez said.

“It is shows you many things, showcases your strengths. Rugby empowers you.”

For all of this, Vázquez added: “I want a career in whichever sport can become a weapon for social change.”

Due to her experience in political science and the degrees she will achieve in Spain thanks to the scholarship, she will have the weapons to follow her dream.

“I want public policies because in Mexico we lack sporting culture. I would like that to be my contribution in my country,” she concluded.