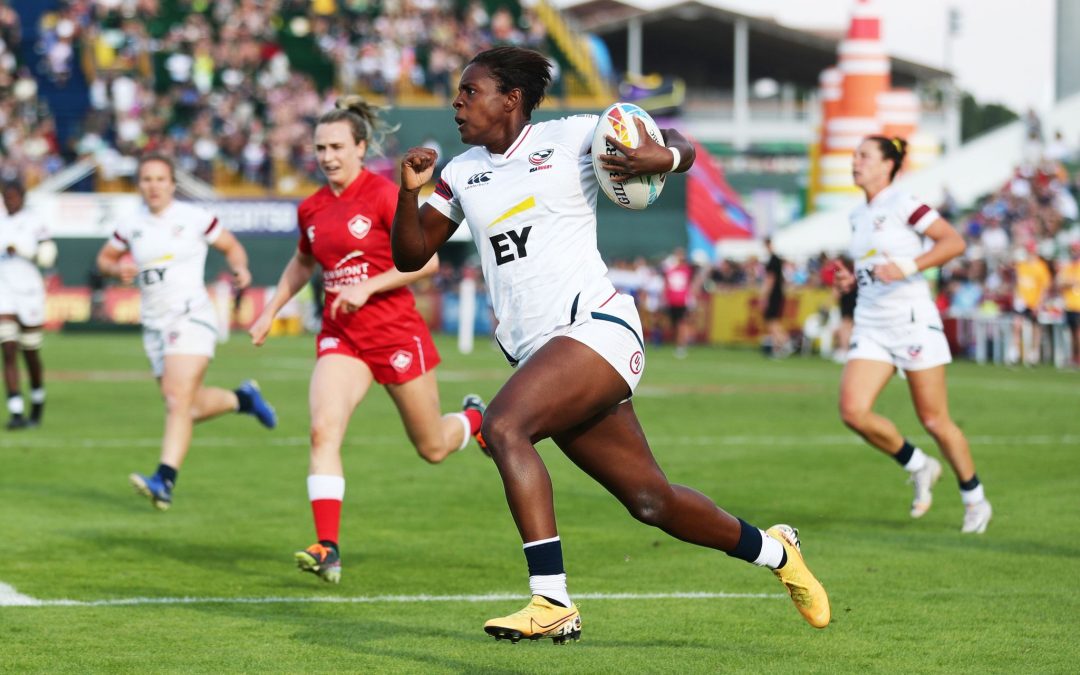 As rugby sevens returns from a year-long lay-off in Madrid this weekend, USA star Naya Tapper says she is “super-excited” to be finally back doing what she does best – tearing up the rugby field.

More than a year has passed since Naya Tapper and her USA team-mates got to test themselves against international opposition in the rugby sevens arena because of the coronavirus pandemic, but the long wait finally comes to an end in Madrid, this weekend and next.

The US Women’s Sevens Eagles are one of six teams who’ll be competing in back-to-back tournaments in the Spanish capital that will serve as invaluable practice ahead of their participation at the Tokyo Olympic Games.

Lock in these new times for women's #Madrid7s competition.

Watch LIVE on @FloRugby in the U.S. pic.twitter.com/kTypEYyMS8

And the long-striding Tapper is relishing the chance to turn a lot of hard work behind-the-scenes into practice.

In an exclusive interview with World Rugby, she said: “We have been training a lot back home so we have been lucky to be able to do that and we are super-excited to be out here and finally play against people other than our team-mates.

“I think it is important to show us the connection is actually there. It is a lot easier to have it when you are playing against people who you are with every day and you know how they play.

“I think in this first tournament that will be the important thing – if what we have been working on has been necessary, or if we need to start focusing on other things so that when we get to the Olympics we are where we need to be to bring the gold medal back home.”

Fitness and defence have been two of the main ‘work-on’ areas for a side that qualified for Tokyo because of an outstanding second-place finish on the HSBC World Rugby Sevens Series 2019.

USA ended that series by winning in Biarritz and backed it up the following season with a Cup final win on home turf in Glendale. But the last time they took to the field before being mothballed as a team was in Sydney, on the first weekend of February 2020.

Since then, some new faces have made their way into the squad and Tapper, who has been part of the Eagles setup for six years, in 15s and sevens, is looking forward to seeing them in competitive action.

“We have a lot of new faces on the team so I am excited for them, too. Sui A’au is a very strong, hard-hitter who has been with us for some months and has done really well in training and it’ll be exciting to see what she does in competition,” said the California-based speedster.

“And there’s Nia Toliver, she’s a wing and prop for us, and she played a little in Japan but she’s an American athlete and super-strong and super-fast and I am really excited to see her tear up the field.”

While the Madrid tournaments provide a vehicle for the USA to prepare for Tokyo 2020, Tapper says they will be going all out to win, too.

“That’s our goal, 100 per cent. It’s our goal in any tournament we go into. Whether it’s an invitational tournament or the Olympics, we want to go home with the gold medal,” she pointed out.

“If we win, it’ll be very reassuring for us that the work we are putting in behind-the-scenes is paying off.”

Given the close proximity of the teams in the standings when the HSBC World Rugby Sevens Series 2020 was cut short, France and Russia will probably be their toughest opponents. The USA were in fifth position in the series at the time, with France one place above them and Russia one place below.

“That’s probably what the commentators would say but you never really know, especially after not playing for such a long time,” the 26-year-old said.

“I am kind of just playing it as it goes, you can never be too sure, you always want to come with your A-game.”

Taking off to Spain for the Madrid 7s tournament. Grateful and excited to be on this team and to get back to some rugby against people other than my teammates haha 😆 See ya in 2 weeks America! Spain here we come!#Madrid7s #usarugby #grateful #travel #spain pic.twitter.com/41sdYWfOa8

For Tapper, the chance to compete at the Tokyo Olympics is something she has been working towards ever since missing out on Rio.

The former sprinter grew up watching sport’s biggest occasion at her Jamaican grandmother’s house in South Carolina and was in awe of Usain Bolt.

“He has definitely been an inspiration for me in terms of the Olympics. He is lightning fast and so confident about it, and I love that about him,” enthused Tapper, who grew up in North Carolina.

“For me, having been around that team when they went to the Olympics and not participating then, it has been a very important goal for me to be selected for this team, and then to be a part of bringing that gold medal back home.

“The accomplishment of making the Olympics as a whole is very rare, not many can say they have been to the Olympics let alone played in the Olympics, so I think it would be a very proud moment for me and it would make my family and friends really proud.”