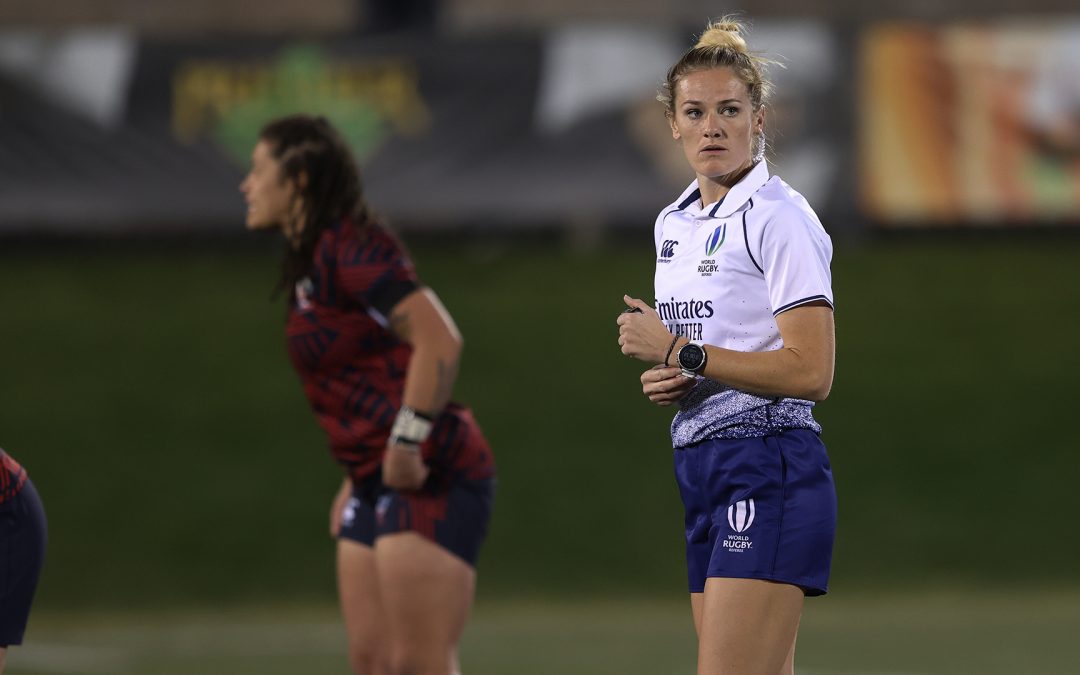 DUBLIN, IRE (March 7, 2022) – World Rugby today announced referee assignments for the 2022 Tik Tok Women’s Six Nations where USA Rugby and Major League Rugby referee, Kat Roche will make her debut and become only the third American to officiate a Six Nations match. Following in the footsteps of Dana Teagarden and Leah Berard, the assignments mark another exciting benchmark in Roche’s rise as a world-class official and the USA Rugby referee community overall.

The Tik Tok Women’s Six Nations begin on March 26th with Roche officiating the Ireland vs Wales opener at 12:45 PM ET, and again during the Italy vs England match on April 3rd at 10 AM ET. Both fixtures along with the full tournament will be streamed live on FloRugby.

“Six Nations has always seemed a bit unattainable to me,” said Roche, “Dana Teagarden and Leah Berard are both legends of the game and I never really considered that I would begin to achieve on a similar path as them. I’m so excited for this opportunity, and plan to enjoy every moment as it happens.”

Since July, Roche has had an eventful and exciting sequence of events after becoming the first woman to referee a Major League Rugby match. In November, she ran onto the pitch at Infinity Park in Glendale, CO for her test match debut during the USA vs Canada game, as part of the World Rugby Pacific Four Series. Since then, the Texas Rugby Referee Association representative has also officiated a Rugby World Cup qualifier for the upcoming quadrennial in New Zealand, ahead of this most recent assignment for the Six Nations.

Roche has been assisted by a dedicated referee coach in Mike Kelly, along with Strength & Conditioning Coach Jarrod Presland, as part of USA Rugby’s support for top referees who are on World Rugby’s radar. The Austin Gilgronis and Major League Rugby have also opened their doors to Roche. Since last season, she has been refereeing open scrimmages, live mauls and scrums throughout practice sessions for added training, in lead up and after her MLR debut in July 2021.

“It’s been a wild few months. I definitely feel like I have gone from watching the international women’s referee group from afar, to being a real part of it. When I look in retrospect, it seems like a waterfall of events and assignments, but in the moment it’s just one match to focus on before you move onto the next one.”

USA Rugby Referee & Laws Committee Chair, Olivia Rogers added, “Kat’s referee career progression is a testament to her deep commitment and growth learning mentality that’s allowed her to develop her own style to contribute to the game, both on and off the field as a thoughtful leader.  The referee community is very proud of her successes.”

USA Rugby Director of Training & Education, Jamie McGregor added, “This is incredibly exciting news for the United States and referee development. As Kat mentioned, it wasn’t long ago that she was looking up, motivated by the international referee group. Now being part of that tier, she can do the same for aspiring referees hoping to reach the same heights. With the likes of Kat and Amelia Luciano leading the way for American referees represented in test match rugby, these are exactly the role models we’re pleased to support and watch bring a spotlight to rugby officiating.”

When asked what aspiring referees can do to follow the same path, Roche answered, “Honestly, my advice is the exact same as everyone else told me when I was coming up, except now I understand how right they all were. Control the controllables. You can’t control player behavior, weather, or assignments. You can control the effort you put in, the attitude you have, and the way you act/react.

“Put in the reps. You could have a selector watching a muddy D3 club match or the D1A National Championship. If you’re not out there giving 100% in each match, you’re not going to make it to the next level.

“Lastly, be patient and positive. The timeline is not the same for everyone, timing and luck weigh into selection more than you ever thought possible. Support your friends and cheer on their achievements. Someone else succeeding is not taking away an opportunity from you.”

The Tik Tok Women’s Six Nations begin on March 26th with Roche officiating the Ireland vs Wales opener at 12:45 PM ET, and again during the Italy vs England match on April 3rd at 10 AM ET. Both fixtures along with the full tournament will be streamed live on FloRugby.