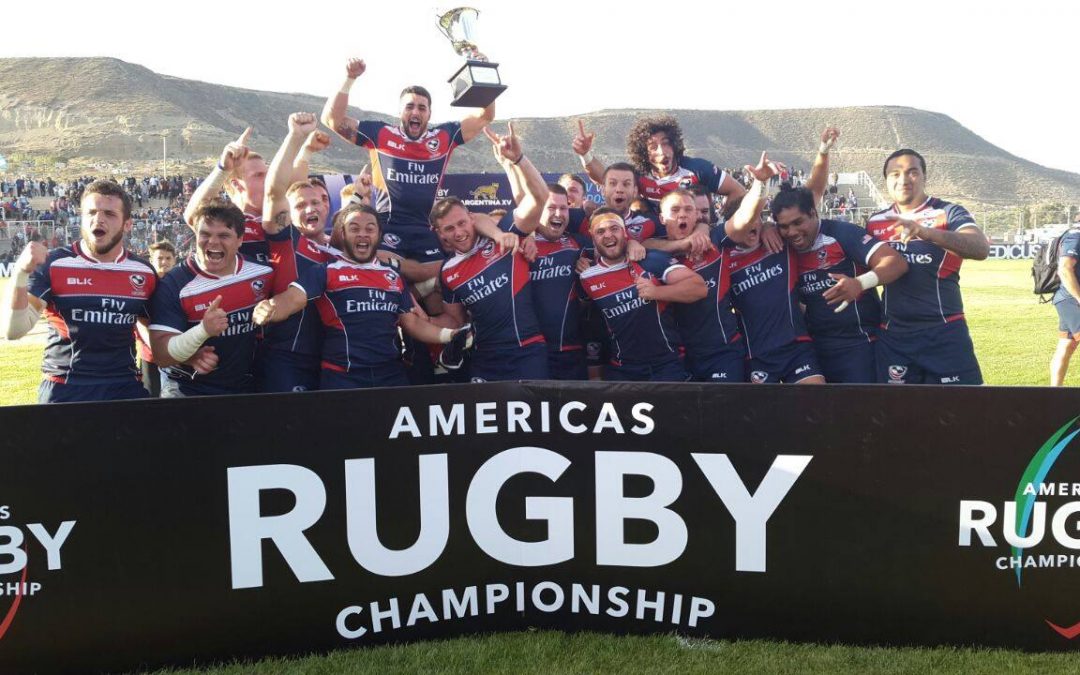 USA won the second Americas Rugby Championship on points differential despite drawing the final game with the last kick of the game. In an intense game at the Estadio Municipal, Comodoro Rivadavia, the Eagles scored four tries to and took the bonus-point in the draw and finished the tournament on 22 points; Argentina XV finished second on 21. Third was Uruguay, fourth Canada, fifth Brazil and sixth Chile.

With the ARC growing – every game was live on television and available in territories of the teams involved – USA proved too strong in the end dominating most of the opening half and the final exchanges.

It took a couple of minutes for the Eagles to figure out they were the newly crowned champions, yet were in full celebratory mode when the trophy was presented by Sudamérica Rugby’s President Marcelo Rodríguez.

Played as the final it was, the first half had USA controlling most of the exchanges despite Argentina XV scoring the first three points through the boot of Domingo Miotti. Argentine-born Ben Cima soon struck back with a 55-metre kick.

Reaching the half-hour mark, Argentina XV seemed to be in control attacking the USA final metres, when prop Chris Baumann stole the ball in a maul and the Eagles launched a counter-attack through captain Nate Augspurger.

The speedy wing ran almost eighty metres before being stopped by the last Argentina XV defender; flyhalf Ben Cima, in support, took the ball and managed to scramble and score in the corner against the run of play.

Cima missed the difficult kick but converted the second Eagle try eight minutes later after the strength and experience of the pack was too much for a younger home team set of forwards. They were pushed hard and from the rolling maul, replacement lock David Tameilau emerged as the scorer.

The final minutes were spent with Argentina XV attacking the Eagle try-line. After a handful of penalties and with the clock on 44 minutes, referee Joaquín Montes awarded the home side a penalty try when Mike Te’o forced a knock-on. The fullback-cum-wing was also sent to the bin for the first ten minutes of the second half.

From the restart, the Eagles were soon under more pressure as Tameilau was sin-bined for stomping, leaving his side with thirteen players. Choosing to play a scrum close to the Eagles try-line, Argentine scrumhalf Sebastián Canceliere received a yellow card for the same infringement as the USA lock only seconds later.

The flow of the game changed and Argentina XV seemed more intent in the second half. A second penalty try was awarded for repeated infringements in the scrum and the home side went into the lead 17-15 and a couple of minutes later the lead was stretched with a second penalty goal from Domingo Miotti.

The game opened as the bench was used. Replacemente scrumhalf Lautaro Bazán Vélez broke close to the ruck and after a long run by number eight Tomas de la Vega he passed inside to fullback Gabriel Ascarate to score under the posts for Juan Cruz González to add the goal.

Argentina XV were unable to stretch the lead and with six minutes to play, a move that started with a long run down the left touch ended with Cameron Dolan diving in the right corner after good hands put the strong eight-man into space. Cima failed to convert and the last few minutes became extremely intense.

USA did not want to lose, uncertain of what could happen with the draw, still attacked relentlessly. In overtime, Tameilau become the new Eagle hero scoring under the posts to make Cima’s conversion a foregone conclusion.

The second consecutive draw between these two sides game the Eagles the Americas Rugby Championship.