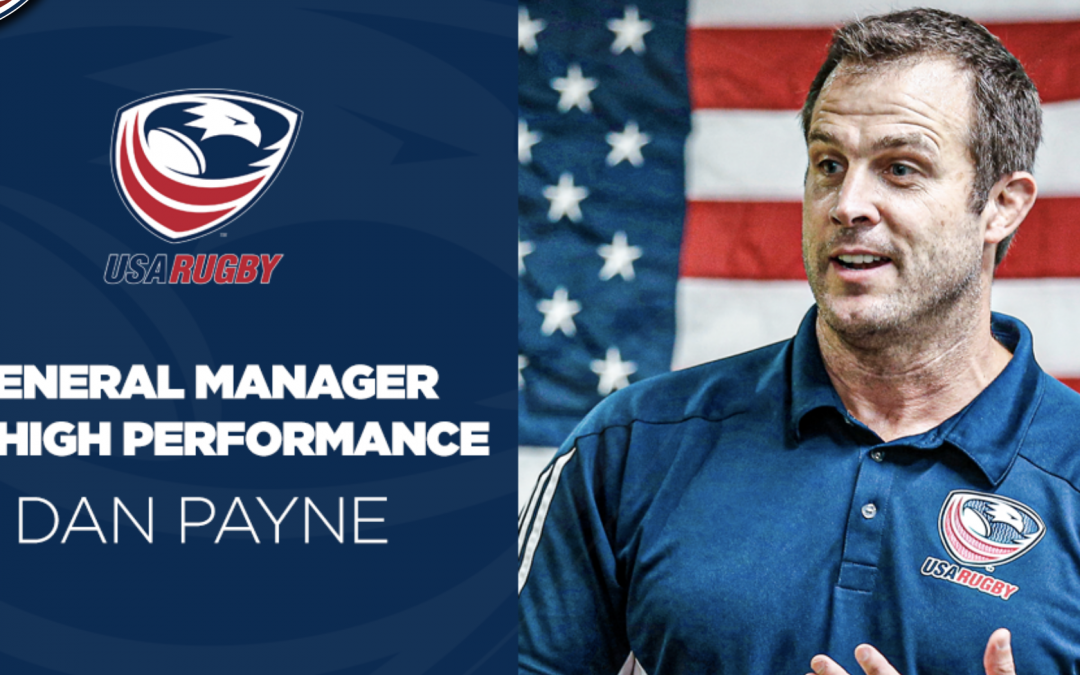 GLENDALE, CO (April 9, 2021) – Following an extensive two-month search and evaluation of applications, USA Rugby has appointed Men’s Eagle Alum, Dan Payne as General Manager of High Performance. Most recently seated as CEO of Rugby Americas and previously USA Rugby, Payne brings extensive understanding and bespoke experience to the dedicated role. Collaboratively with Director of Women’s High Performance, Emilie Bydwell, the General Manager position will lead and oversee all aspects of USA Rugby High Performance including the senior national teams, junior national team pathways and act as primary liaison to World Rugby, the United States Olympic and Paralympic Committee and Major League Rugby. Strategically, Payne will also oversee the identification, development and socialization of the USA Rugby High Performance brand, team strategy on and off the field, and facilitate the growth of High Performance opportunities within rugby across the United States.

“I’ve been very fortunate and am deeply thankful for the opportunity World Rugby afforded me over the last three years,” said Payne, “The experience offered me tremendous personal growth as an individual. There’s no place I’d rather invest that experience than supporting the game in the USA.”

Payne first found rugby at the club level with Old Blue of New York, leading him to pursue playing in San Diego with Old Mission Beach Athletic Club before making his way to the USA Men’s National Team and competing in the 2007 Rugby World Cup. After three years coaching at San Diego State he was named as an Assistant Coach under Eddie O’Sullivan with the Men’s Eagles team that competed in the 2011 Rugby World Cup in New Zealand. Simultaneously, he was Athletic Director and Director of Rugby at Life University where he founded the men’s and women’s undergraduate programs before being hired as Chief Executive Officer to USA Rugby in 2016. Since 2018, Payne has dedicated his time as CEO of Rugby Americas, focused on the growth of North and South American national teams on the World Rugby stage.

Payne added, “Throughout the past three years I’ve watched an immense amount of hard work and growth take place at home from people I know and greatly respect. Specifically, Interim High Performance Director, Huw Bevan has done an immense amount of work for our union and every fan and stakeholder involved with rugby across North America. His commitment, expertise and respect for investing in the game is something that has greatly benefited our small corner of the world.”

USA Rugby CEO, Ross Young said, “As we refocus on short and long term goals for our national teams and pathways within the new union structure, I look forward to Dan’s notable dedication and passion for development of the USA Eagles.”

In February, a selection panel was assembled to review candidates where USA Eagle Alum, Katie Dowty served as an International Athlete representative. Dowty noted, “Dan’s knowledge of the sporting landscape in the US, in particular the collegiate landscape and the potential of the NCAA initiative in women’s rugby, could be critical in unlocking our full potential as a union. He expressed a clear commitment to long-term planning and investing in consistent, accessible, and equitable talent-development pathways.”

Through the USA Rugby reorganization, international coach and administrator Huw Bevan has supported USA Rugby as Interim High Performance Director and will work with Payne through a transitional period, ensuring seamless program support with USA Eagles competitions returning and the Tokyo Olympics on the immediate horizon.

Young added, “A sincere thank you to Huw for the great work and support he has shown during this unique period, reformatting the budgeting of our High Performance programs and most recently overseeing the placement of quality coaches dedicated to the Eagles pathways. I look forward to a continued working relationship with Huw as he continues to be a positive influence on USA Rugby.”

Immediate objectives for Payne include a robust talent identification and development process through pathways with multiple entry points that is unique to the USA landscape, High Performance coach development and supporting the NCAA initiative.