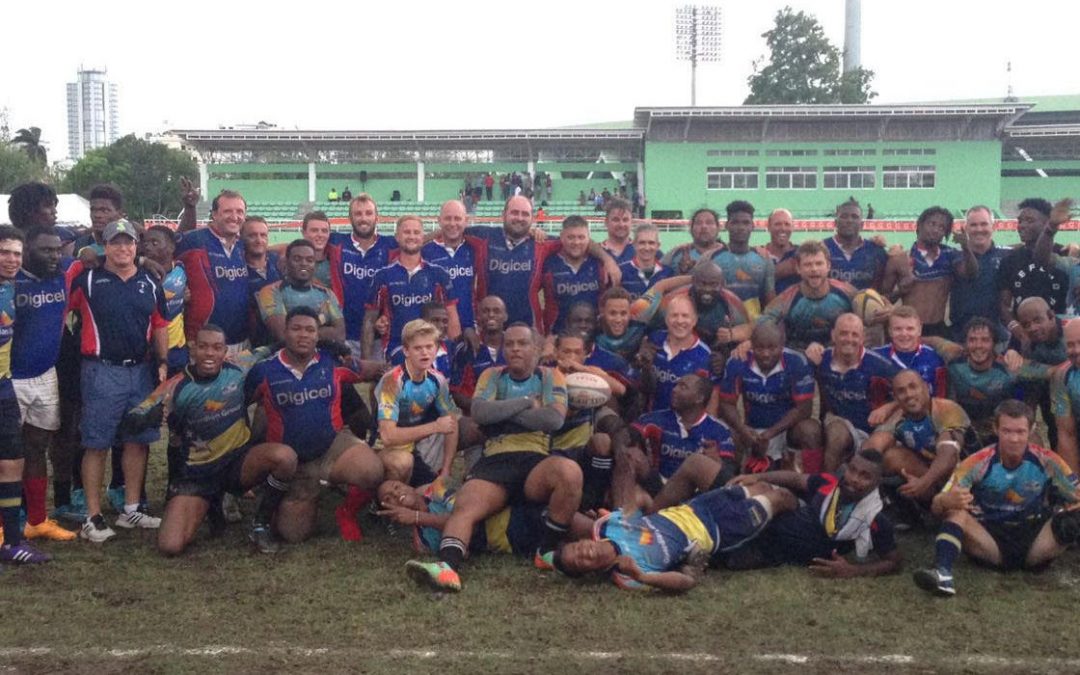 On Saturday, April 30th, 2016 the Turks & Caicos Islands (TCI) Rugby Football Union Men’s rugby team made history by defeating Curacao 41-10. The TCI side travelled to the Dominican Republic so the match could be played on neutral ground. This fully sanctioned World Rugby match was refereed by Pablo Septien from Mexico, at the Stadio Olympico, Dominican Republic’s National Stadium.

The match was an exciting encounter with plenty of attacking runs, especially from the TCI side. A strong TCI scrum that dominated the Curacao squad provided a stable attacking platform to delve into the Curacao side. In his first international match #8 Trevor Walkin, from Grand Turk, was extremely effective in carrying the ball and tied in numerous Curacao defenders into the tackle. The ensuing phases of play provided the TCI side with lots of scoring opportunities. Some nervous hands in the backs left many opportunities wanting in the first half and although the TCI squad had dominated time of possession and territorial advantage the score was only 14-10 at half time to TCI. However, after a tongue lashing from Captain and Coach Simon Taylor at half time, the TCI backs settled down and started to string together numerous phases of play without mistakes, and gaps appeared in the Curacao defense. Franco “The Rhino” Mompremier from Providenciales, who went on to win man of the match for TCI, tore holes through the Curacao defensive line with a number of punishing runs that had defenders flying off him. Lincoln Outten, Kadis Simmons, Sean O’Neill and Paul McKenzie all scored tries for TCI and Gareth Butler slotted three kicks to account for additional TCI points.

TCI rugby President Keith Burant stated, “TCRFU has played some very close matches with other International teams, but have come up just short in the past, particularly against Jamaica and Bahamas. This match, however, was another story. The TCI forwards crushed the Curacao pack and provided lots of opportunity for our fast backs to attack. After being a bit anxious in the first half the set plays started to work and the scoreboard really started to move. A great job and a testament to the hard work of the players and especially the invaluable contribution from the players that have come up from the junior program are now making with the Men’s side.”

This epic victory means TCI now move up from last place amongst the 40 teams in the America’s Rankings, to the new position of 20, above countries with established rugby programmes such as Belize, Costa Rica and Cuba. Full information on the America’s Rankings can be found at www.americasrugbynews.com. Saturday’s win further demonstrates the continuous hard work and commitment put in by the volunteers, players and staff at the TCIRFU. The victory is proof that continuous hard work and determination can yield great results and opportunities for TCI rugby talent, especially for those who came through the TCI Youth Development Programme, and further still, gained university scholarships through rugby, such as Hendriks Joseph and Kadis Simmons; something that has only benefited TCI rugby. Parents are actively encouraged to enroll their children to the TCI rugby Youth Development Programme, which takes place every Saturday morning at the Meridian Field, Provo. Please contact Tom Fielding on 343 6937 and for those in Grand Turk, parents are advised to contact Aussie Dickenson on 241 1549.