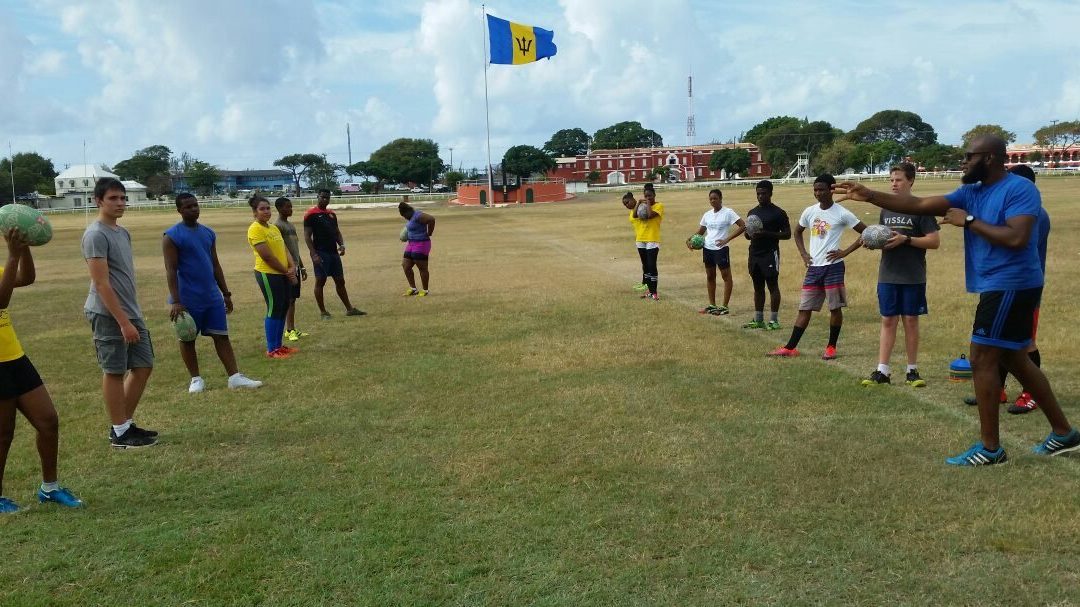 This Sunday girls and boys from around Barbados will descend upon Frederick Smith Secondary School in Trents, St James to play the semifinals and finals of their 2017 interschool league. The main event is the Rugby Barbados World 7s–an international men’s and women’s tournament in its second year–but the youth matches are an important part of the Barbados rugby story. The youth league boasted 12 teams this year, and is a part of the thriving Get Into Rugby (GIR) program.

GIR in Barbados began only 3 years ago, but has already been introduced to over 3,000 youth. What started as a rugby summer camp in 2014 has quickly turned into a successful introduction of rugby to the island, and an integral component of the union’s development pathway. Kevyn Murrell, the National Director, and Kevin Cobham, the Technical Director, began putting on saturday morning GIR sessions about three years ago. They found a core group of interested kids and decided the take their sessions into the local schools, and eventually began what is now the after-school rugby program.

When the program continued to grow and positive results were seen over a wide range of age groups, they solidified GIR as a cornerstone for rugby in the country.

“It has changed from just an introductory program into a development program.” said Kevin. “We are still finding new players and doing the introductory stuff, but we’ve also gone past that and are trying to set up a consistent leagues for the kids.”

Youth in Barbados who are playing rugby for the first time begin learning the game through the tag version in their schools and afterschool programs. When they are ready they then move on to tackle sevens, with the pathway continuing to the U-19 team, then local clubs, and eventually the senior national team.

The program has consistently been in 4-6 primary schools for the past several years and this year they hit ten. Cobham goes into each school several times a week to teach rugby as part of the school’s PE programs.

By all measures, youth rugby is growing steadily on the island. Between the PE classes, after-school programs which host matches every other Saturday, and summer camps, you’ve got there are a lot of kids in Barbados consistently picking up the rugby ball. Saturday game days generally draw about 20-30 boys and girls, with rules adapted to skill and size level.

With rugby’s visibility growing, many kids are making the jump from other sports.

“At one point we used to go into schools with a rugby ball and the kids would say, ‘oh American football’, but now they recognize it as rugby,” said Cobham.

One of those kids was Kris Carrington. Every day after his school work was finished he’d walk past the rugby pitch and watch his school’s team practice. He didn’t intend to play

when he first discovered the sport in 2014, but after a year of the Coach Dwight Forde asking him to play, he decided to go for it.

“I told him, ‘when lessons finish, I will come,’ said Karrington. “In 2015 I started to play. A month or two months later we had our school tournament and I scored the most points. After that I wanted to play more.”

Karrington quickly became a force on the U-19 team and by early 2016 was ready for a club match. He fondly remembers scoring in that match as well.

By summer 2016 he was coaching as well. Carrington has coached summer programs around the island, girl’s camps, and serves as the St. George Primary School Girl’s Program Assistant Coach when he’s not too busy with school work.

“Kris has always been enthusiastic about rugby and we’ve seen him growing as a player and as a man,” said Murrell. “We are looking forward to his continued growth.”

Carrington is now in his second year in college studying mechanical engineering. He plays for for the Emperors Rugby Football Club and is on the Barbados National 15s and Sevens teams. This year’s RAN’s Sevens in Mexico City was a first for Carrington. Three years ago he was a 16-year old watching rugby on the sidelines after school. Last month he represented his country and stepped on to the international stage.

“RAN Sevens was a wonderful experience being at such a young age and being able to play for my country against different countries for the first time,” said Carrington. “It will always be a honour to represent my country.”

Carrington remains deeply grounded and committed to the program that helped propel him to where he is today. He coaches because he wants to give back and believes that GIR is an integral component to continue rugby’s growth on the island.

“It’s a building block for the sport,” he said. “Instead of going straight into a big match, the program gives you that welcome that makes you love the sport.”

Carrington is just one of several young athletes who share similar stories. Rugby found them at a fairly young age and they developed through the pathway. Murrell and Cobham seem to be the glue that holds the whole thing together, but their success also comes from recruiting committed volunteers.

“The program has administratively grown from strength to strength attracting volunteers that are significantly contributing to the continuous growth of their program.” said Kwanieze John, RAN’s Get Into Rugby Program Manager. “Now that they’ve had series of festivals and schools that have committed to the program, they’re in the process of establishing a girls and boys school’s league–a first for the union.”

There’s no better example of the depth of the program than what fans will see this weekend at the Rugby Barbados World Sevens tournament. When the four final teams take the main pitch to play out their semifinal and final matches of the season, they will serve as a testament to what a well-administered youth program can do to change the shape of rugby in a union.

Wearing a Barbados Jetblues club jersey, Kris Carrington be looking on at some of the interschool players he’s coached and a few that he’s played with, feeling grateful for months of hassling from Coach Forde and for the few short years of being immersed in a program that got him there.

Fifteen teams will take part in this weekend’s Rugby Barbados World Sevens. Former Welsh international Shane Williams, fourth on the international list of leading rugby union test try scorers, will be attending a Charity Dinner for the GIR program on Dec 7th. The tournament will also be live streamed on Facebook and YouTube from 7:30 a.m. to 3:30 p.m. ET. For more information on the tournament, visit the event website.

This article was amended from the original version to clarify that the interschool semifinals and finals are on Sunday, not Saturday.