The next generation of America’s rugby talent: The forwards 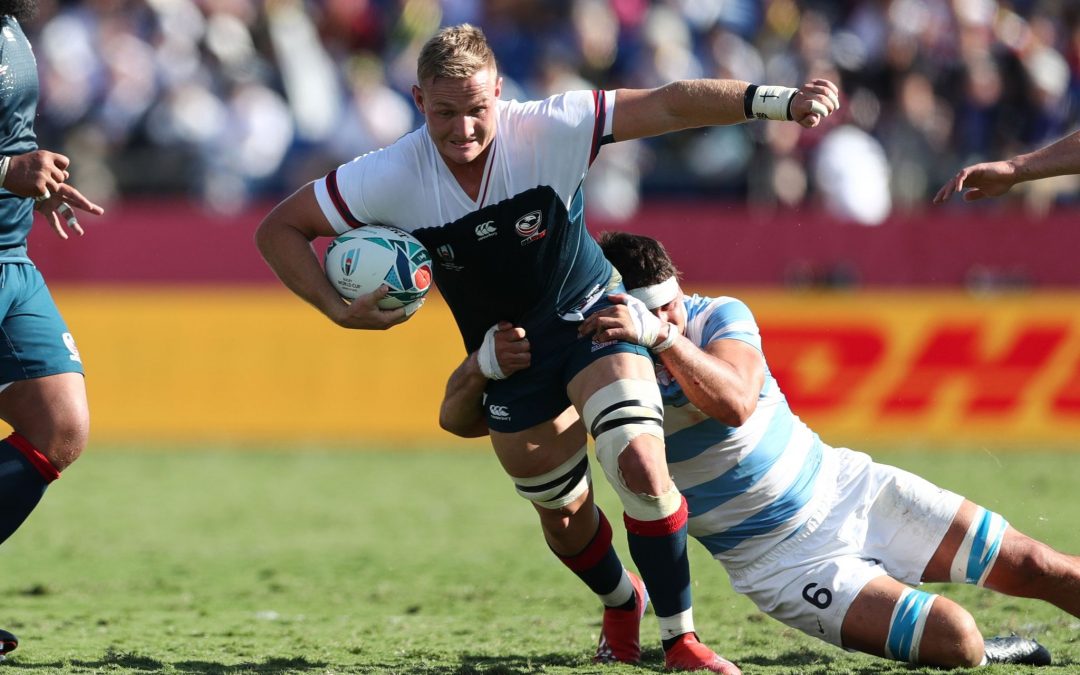 USA Rugby showed competitive flashes at Rugby World Cup 2019, even hinting at an upset against France for 60 minutes. However, the Americans returned to home soil winless and still looking for their first Rugby World Cup victory since 2011.

Much has been talked about the effect North America’s professional rugby league, Major League Rugby – an avenue for all players to compete at a professional level year-round – can have on the U.S. side internationally, with the hope that the MLR can pave a similar path to Japan’s Top League.

As the MLR enters its fourth season and with Rugby World Cup 2023 now only two years away – and qualification still to be ensured before then – former Men’s Eagles Sevens player and World Rugby commentator, Dallen Stanford, looks at the up-and-coming talent who could provide a huge boost to Gary Gold’s squad on their journey to France 2023. First up: the forwards.

Ainu’u currently has tremendous experience already at just 21 years old. He played in the last Rugby World Cup, and it’s that experience that will see him mature like a fine wine as part of the future Eagles front row.

He’s been honing his technique with Toulouse in France since he was just 18 years old. Coach Gold mentioned that’s a tremendous advantage for him, as if there’s one area of the game that the French professionals will expose you, it’s the dark arts of the front row. Ainu’u getting that experience there bodes very well for this American side.

Another youngster at 24 years old, Pifeleti has been a force for Major League Rugby’s San Diego Legion. He started every game a year ago and was on his way to another standout season before the 2020 campaign was cut short.

Both he and his brother Kapeli, who will be detailed just a couple of slots down, come from great rugby stock as the son of the late, great Tongan international Otenili Pifeleti, and are the cousins of England’s Vunipola brothers.

Currently 23 years old with six caps and four starts for the Eagles to his name already. He was a standout wrestler and we know how well wrestlers can translate their athleticism to rugby, especially in that forward pack.

“The Grizzly Bear” from Lindenwood is a player that Coach Gold has mentioned as developing very nicely. With Rugby World Cup 2023 still a few years away, Wenglewski will have more time to progress in upcoming test matches, as well as continue his dominance in MLR with Rugby ATL. With a unique playing style, and hairstyle to match, he’s one that can add a bit of spice to the American front row.

The brother and front row mate of the aforementioned Faka’osi, the younger Kapeli will be only 24 years old by the time the next Rugby World Cup selections are made. Currently showcasing his tremendous skills for Saracens in the English Premiership, he already has a handful of caps and has been seen manning the hooker position at the Pacific Nations Cup. Their former Legion coach Zack Test notes the brothers for their athleticism, tenacity, and lighthearted locker room presence that disappears the moment the Pifeletis step across the white line.

Joe Taufete’e will almost certainly be holding down the fort at hooker for years to come, but this is a player who can develop under him, give him some rest, and be a building block for the American front row in the future.

Sosene-Feagai really stood out at the 2019 Pacific Nations Cup. He’s a player who’s always around the ball and has great hands. In addition to playing with MLR’s Old Glory DC, he has plenty of experience playing in New Zealand, which excites the American coaching staff given the level of competition he has faced over there.

A wild-looking Legion forward, Mitchell grew up playing both American football and rugby. He has tremendous talent and is getting a serious look at one of these roster slots. “Big Red’s” athleticism was on display even on the sevens pitch at the USA Rugby College 7s Championships, which speaks volumes for a man that size, though it was an injury there that ended his opportunity to play with the ACT Brumbies in Australia.

“The Hit Man” had a 90 per cent tackle completion rate in the 2020 MLR season and is the man whose hit on former French international Mathieau Bastareaud was heard around the world. He was at the World Rugby Under 20 Championship with the U.S. and is a player Gary Gold said just needs more experience. Fortunately, with three years to go before the next Rugby World Cup, he has plenty of time to get that.

A massive unit at over two metres in height and over 133kg, CC Mahoni is that power forward that teams covet in the tight five. He’s been playing in France since he was 20 years old, gaining that international experience while also standing out for the San Diego Legion in MLR. But there are some questions about his fitness, and thus he’s been used mostly as an impact player so far in his international career. At just 23 years old, there’s plenty of time for him to improve that element of his game and earn more playing time with the Eagles.

He’s been a bit of a late developer in terms of getting the U.S. selectors’ attention as he’ll be 30 years old by the next Rugby World Cup. However, he’s been working hard and has the legs, the fitness, and the ball skills, all boosted by him playing club sevens at the highest levels in America. I’ve nicknamed him “The Horse” because he gallops like one through space, creating havoc for defending players, sometimes carrying small scrumhalves on his back. He can cover a number of positions from the second- to the back-row, and at 1.93 metres and over 115kg, he’s a unit that can provide some line breaks for the American side if selected.

Another young and impressive specimen. I recall covering some of Comptat’s games and instantly seeing him as an impact player. He’s another who’s been gaining experience in France, and mans the second row domestically with the Houston Sabercats. Like Mahoni, in that Greg Peterson-type build, you love what he can bring to the table at lineout time. He’s currently playing in France which gives him an advantage in Coach Gold’s eyes, not only from a competition standpoint, but that he’s playing rugby right now, which not everyone is given the pandemic, and that is where the next Rugby World Cup will take place.

Hanco Germishuys is a player we love manning the back row in America. “The Terminator” is young and tremendously hungry. He has tremendous power to run over people and shows that physicality on both sides of the ball, with 21 tests to his name already. He’s been developing in the U.S. as a youngster, from the U20s to the senior squad, and already has some big moments in his international career, as he scored the game-winning try for the United States v Scotland in 2018.

Ben Pinkelman has made himself known internationally primarily on the HSBC World Rugby Sevens Series as one of the true stars of the U.S. team. He was on the Rugby World Cup roster in 2019, and when he played, you could see the heart and soul he plays with every time he’s on the field. It’s very difficult to switch from sevens to 15s on the international stage, but Pinkelman was phenomenal in that reserve role. He’ll be in line to get more playing time moving forward, as he is poised to switch to 15s after the Olympic Games this year, which is fantastic news for American 15s fans.

Wooching is super fit and athletic, though is still gaining that rugby vision after his time spent away from the game as a standout D1 American football player. Playing a few more seasons with the powerhouse Legion in San Diego will bode well for his chances of being selected by Coach Gold. The “Flyin’ Hawaiian” has plenty of athleticism to bring to the U.S. squad, and is an angry runner in the loose. He really could bring an added element of physicality to this squad.

A tremendous young talent for the U.S. at 23, and with six tests so far. This former Colorado Raptor is a player who finds space and is always a threat with ball in hand. You can see his experience in sevens take place in the loose with crafty offloads and deft passes, vitally important for his position.

The son of Springbok legend Drikus Hattingh, Riekert brings unbelievable athleticism, tremendous strength, and is a powerhouse in Major League Rugby. He leads the pack at number eight for the two-time MLR Champion Seattle Seawolves and has worked his way up from the American club ranks where he was a standout in the Midwest Conference. When I found out he’d gained his U.S. eligibility, it really excited me as Hattingh packs a punch, and is an impact player from the opening whistle.

A big man who can move with pace and skill, Fa’anana-Schultz was capped for the Eagles in 2019. An MLR veteran who’s currently a gamebreaker with Old Glory DC. He’s another exciting American prospect that can get over the advantage line with ball in hand.

This 30-year-old is a massive unit who will deliver some huge hits on the pitch. With 15 tests we’d love to see even more of him internationally. He’s built in the frame of U.S. legend Samu Manoa, he’ll hit the line and get the go-forward ball that the U.S. has lacked at times from its pack.