The Laws, The Law & The Game: Chantel John Balancing Life as a Player, Referee & Police Officer 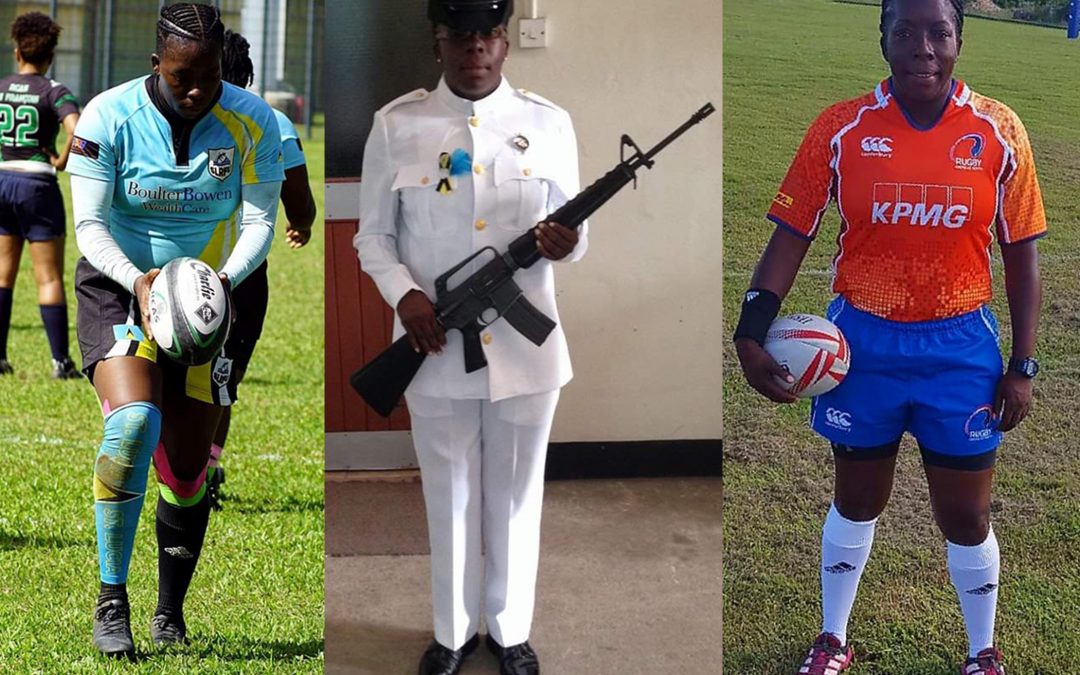 St. Lucia International Chantel John on her journey as an aspiring referee, an accomplished player and a Police Officer on the Island during the time of Covid-19.

Chantel John is a St. Lucia Rugby Pioneer, Legend and Aspiring International Referee. As she balances her life as a Police Officer during the Covid-19 pandemic with her rugby aspirations, she looks at chasing her goals in a changing world.

A life in rugby is always unique, and Chantel John is no exception. An accomplished player, a budding international referee, and a Police Officer dealing with Covid-19 on her home island of St. Lucia make it interesting days for this Caribbean rugby star.

Chantel has watched St. Lucia rugby, and in particular women’s rugby, grow since she took up the game in 2004 around the time she finished up at Castries Comprehensive Secondary School. Rugby training was held at the school for the entire island, and she was encouraged by a friend to try it out. She had already been an accomplished soccer player, representing St. Lucia in that code, so she gave it a try. At the time there were not too many female rugby players on the island so they played in a series of trial tournaments with the goal of making the St. Lucia team. For Chantel, rugby was welcoming, it was comfortable, there was “lots of laughing and fun” and she knew she was in the right place. As she says, “everyone was looking out for you”. As the sport grew, Chantel became a member and Captain of the Whiptail Warriors, one of St. Lucia’s most prominent teams.

She quickly made the St. Lucia team and has represented her island nation as recently as January when St. Lucia won the Martinique Women’s Sevens. She has been trying to transition to refereeing but says the coaches and players keep calling and she can’t resist – they “seem to like to have me around”. Chantel’s fondest memory with the team is a second-place finish at the 2009 Rugby Americas North (then NACRA) tournament in Mexico. With the sport in its early phases for women on St. Lucia, that effort established the St. Lucia women as a team on the rise. She has captained the national team on numerous occasions and achieved great victories throughout the Caribbean, but the breakout tournament in Mexico is the one that still means the most.

There is some 15s rugby on St. Lucia, but 7’s and 10s are the primary drivers of the game. Chantel is pleased with the growth of the sport and credits former St Lucia Rugby President Colvis Samuels as the person whose dedication has lead to solid growth. Whether it is organizing events and showcases, working with his RAN colleagues, or just simply making sure that players have a ride to training, Samuels is a person that keeps Chantel comforted in knowing the sport has her back. If you add in Wayne Pantor, the island’s Director of Rugby, who has consistently traveled the island to introduce the sport to prospective players on this soccer-mad island, the future looks quite bright, and Chantel is excited for the days ahead.

Chantel made the decision to take up refereeing in 2015 and is enjoying it immensely, despite the occasional callup to the national team. Her first assignment was a men’s match on the island and she admits to some initial nerves but everything calmed down when the teams realized “she doesn’t play” and this Police Officer is equally comfortable keeping the peace on the rugby pitch. As a player she strove to understand the laws of the game to make a more adept player, and this is a major factor in her refereeing approach. She cites fitness and the constant desire to learn the best application of the laws as what excites her most. Her approach is paying off Chantel was awarded the Technical Official of the Year Award at the St. Lucia National Sports Awards in 2018 and 2019.

A wide range of appointments have come for Chantel as a referee and she has been part of referee teams at the RAN u-19 tournaments, the Tropical Sevens in the USA, the Barbados World Rugby Sevens, and numerous national matches. She credits Scott Harland, Development Manager at RAN, as a great proponent of her refereeing career and a person who always makes the time to review game performance and law with her. She cites Rasta Rashivenge and Nigel Owens as referees she admires and with Scott in her corner, she would love to go as far as she can with the whistle. The camaraderie of the referee community has made a similar impression on Chantel as the playing one did. She has enjoyed the  multi-day tournaments that have provided her with individualized coaching and the general support of referees from around the world who all jump at the chance to share knowledge and ideas.

Life in St. Lucia is a little tough during these times of the Covid-19 pandemic, and this 14-year veteran of the Police Department is busy with her colleagues as they work to keep the island residents safe. Chantel, whose title is Women Police Constable, is dealing with curfew enforcement and mask-wearing regulations in shops with only 18 cases confirmed throughout the community. She says this low number of cases has lead a small percentage of residents to not take it as seriously as they need to, but overall the island is managing well. There are currently no active cases on the island, in part thanks to Chantel and her colleagues work.

Her role in the Police Department has been a balancing act for Chantel to develop as a player and referee, although the department has been generally supportive of her sports passion. She has had to miss some rugby events to fulfill her duties, but that is just a part of life and Chantel has taken it all in stride.

The pandemic has also halted all sports on the island and any international events that would allow Chantel to officiate or compete. She has her sights set on the goal of refereeing on the World Rugby Sevens Series, and like all referees at this time she is doing what she can to keep developing without games to referee – keeping her fitness levels up, watching film, and working on her understanding of the laws and their application. Once things return to some sort of normal, Chantel wants to keep working towards her ultimate goal. With the intelligence and tenacity that shines whenever she plays and referees, this goal may ultimately become a reality.