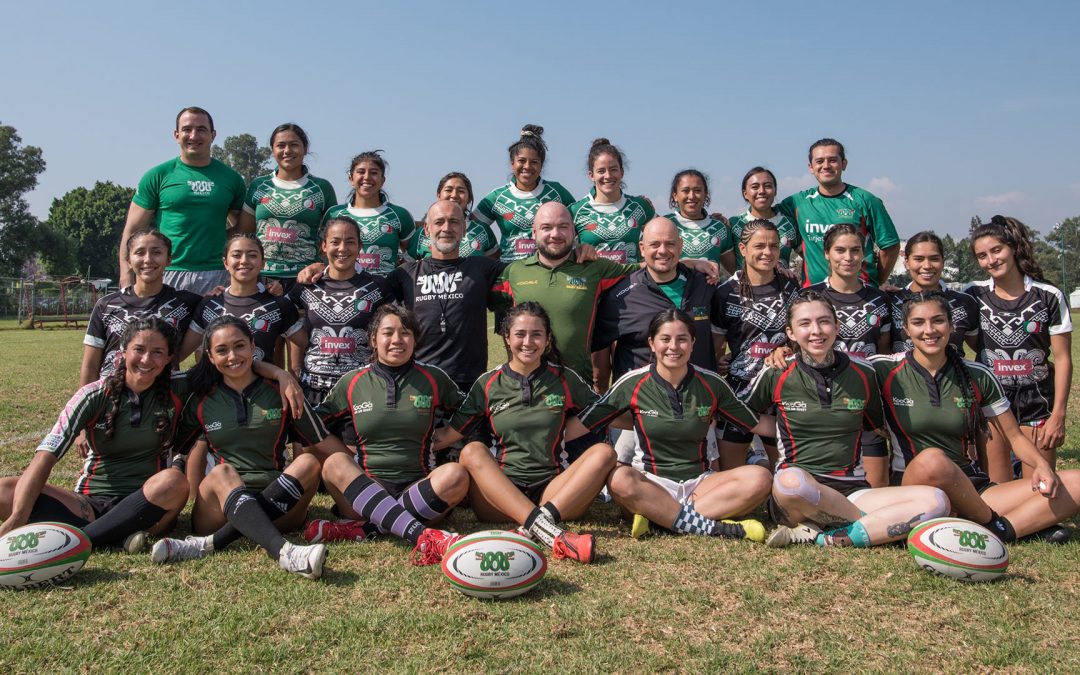 This month, Mexico will be sending its finest Men’s and Women’s Sevens players to Monaco to compete for the last chance to qualify for the Tokyo 2020 Olympic Games.

The Olympic Games Sevens Repechage will be held from 19-20 June under strict COVID-19 protocols and Team Mexico will be looking to secure both the single Men’s place and one of the two available Women’s places to achieve their vision of qualifying to play in their first ever Olympic Games.

The journey to this point has not all been smooth sailing, however despite the global COVID-19 pandemic meaning Mexican players could not play or train together, some financial and budgeting constraints, and unexpected coaching challenges in the lead up to the final Olympic Qualifying Tournament, the Mexican Rugby Federation says the Serpents are mentally strong, match fit and ready to embrace all that Monaco has to offer; including the recent announcement that 5000 spectators will be now be able to attend the event subject to the maintenance of the current COVID environment.

With 21 of the 24 teams already confirmed as qualified, the top two Women’s teams and the winning Men’s team from the upcoming Repechage will secure the remaining three places to go forward to play at Tokyo Stadium between 26-31 July this year.

The Mexican women will be competing against Russia, Argentina, and Samoa in Pool A, while the men (also in Pool A) will battle it out against Samoa, Ireland, Tonga, and Zimbabwe.

Confirming the significance of the Sevens Repechage Tournament in Monaco, World Rugby Chief Executive Alan Gilpin said: “The rugby family is looking forward to what promises to be a special sevens tournament … a reflection and celebration of sevens international re-emergence from the unprecedented challenges that society and sports people have faced.”

“This was a very challenging moment for rugby in Mexico,” says Ruben Duque, Director of the Mexican Rugby Federation High Performance and the Rugby 15s Program, as well as Head Coach of the Mexican Senior Rugby 15s team, and World Rugby Master Trainer. “Time was against us, so we had to think quickly in terms of how to continue our momentum and preparations for Monaco with the least amount of disruption”.

Faced with this urgency, the High Performance team set up an interim coaching squad to support both Sevens teams including Pablo Guerrero (attack and obtaining the ball), Alessandro Cordone (defense and video analysis) and Ruben (skills, decision-making, and team building). They also recruited Guillaume Berron as General Manager, Franco García as Physical Trainer, and Berenice Araiza and Cristóbal Flores as Medical staff.

This, in effect, gave Mexico the benefit of three coaches all working hand-in-hand to prepare the teams for one of the biggest tournaments for Rugby Mexico to date.

The show must go on …

Despite the initial coaching set back, Ruben and the newly appointed coaching team continued full steam ahead with their preparations for Monaco.

“Although the challenge was enormous, we decided to rise to the occasion,” says Ruben. “We met with Pancho Rubio, Director of Rugby at the Argentine Rugby Union, who gave us insight into how they have prepared during the pandemic. Drawing from his experience, we were then able to positively redevelop our own team preparations strategy.”

Because there had been no active competition in Mexico for over a year, the technical staff could not go out to matches to identify key players as they normally would, so instead the new coaching trio drew up a list of all the known rugby players (men and women) from the past two years before the pandemic, ending up with a list of about 200 potentials for Mexico’s official Repechage team.

Despite COVID exercise restrictions and gym closures, the coaching team then gave each player a physical training schedule and using Pancho Rubio’s advice, they began working on building players’ technical and tactical analysis skills to be applied once physical contact and play could resume.

They also set up five ‘Regional Technification Centres’ in Mexico City, Guadalajara, Querétaro, Monterrey and Puebla and chose a core group of Centre volunteers to ensure they had a solid foundation to train each player (albeit virtually) to their full potential despite the challenging circumstances.

“Once we had these two vital components, we began scheduling daily virtual tasks and weekly virtual sessions,” says Ruben. “Monday to Friday – each day addressed a different element of preparation. We wanted our players to be as prepared as they could be without being able to actually play or train together.”

Although these new centres are currently virtual in nature, Ruben says the vision is to roll out an ‘in person’ holistic approach to learning that will incorporate rugby classrooms, as well as a gym and playing field in each centre. “Long-term, the dream is to provide training programmes for not only the players, but for all roles in rugby such as coaches, fitness experts, managers, and medical personnel. We also plan to expand and set up more centres once things start to reopen again.”

Narrowing down the squad …

Once it came time to select the players to make the first cut, Ruben says the coaching team managed to decide on just over 60 players from the original list of 200 to undergo further intensive training.

To narrow the list even further, they then held three days of talent identification sessions based on basic skills in Mexico City, Puebla and Guadalajara and following strict health protocols and guidelines established by the Mexican Rugby Federation (FMRU) medical team.

These sessions saw Team Mexico’s list come down to 22 men and 22 women who would then participate in a player review weekend of matches to determine final selection.

“We needed to know how these players would perform after more than a year without training or competing in person,” Ruben explains. “Before hosting the weekend, we spent a further two weeks with them gradually introducing contact again and helping them to adapt to being ‘match fit’ as opposed to just physically fit”.

From that weekend of matches, the final list of 15 men and 15 women was decided and the players continued working remotely with technical and physical training plans, as well as attending virtual anti-doping presentations.

Going into the ‘bubble’ …

On 31st May, the 15 men, 15 women and all the staff of Team Mexico went into a ‘bubble’ together under strict medical controls until they fly out to Monaco on 13th June.

“This is the first time that we are all training together in person,” says Ruben. “It is a huge challenge, but we have programmed each day with training sessions, 1-1 feedback, video analysis, breaks, recovery, medical consultations, team building activities, adaptation to the European schedule, and so forth so we can go into this event as prepared as we can possibly be”.

He says the players are extremely focused and 100% committed to representing Mexico at the highest international level. “They know they are an inspiration to many boys and girls in Mexico and they do not take that lightly. This is a pivotal moment in history for Rugby Mexico and we have our sights firmly set on qualifying for the Olympic Games.”

At the time of writing, 19-year-old Men’s player Nicolás Falcon Izquierdo (Nico) had been selected as part of the final list of 15 men for Team Mexico (which will be narrowed down to 12 before Monaco) and says he is hoping to make his debut with the national team at the Repechage.

“I am hoping I will get to represent Mexico in one of our biggest tournaments ever but even just to make the national team is something to be proud of,” he says. “It will be a great learning experience for Rugby Mexico to play at a world-class level and obviously gives us the exciting chance to qualify for the Olympic Games”.

And, he says the players are more than ready to come up against who he thinks will be the toughest opponent in the Men’s division – Ireland. “Ireland is a highly-skilled and experienced team. I also think Samoa will be very competitive because of their physicality, but the team is prepared and we will give it our best shot to win”.

When it comes to the Women’s pool, Irayda Macedo (Karmin) says the team Mexico Women have overcome many challenges to prepare for the upcoming Repechage, including having players spread out over three different countries, however they are committed to the vision of qualifying for Tokyo.

“This Tournament means the world to all of us – representing our country is a huge honor,” she says. “The team is naturally nervous but the excitement and hunger to play outweighs all of that. It’s an opportunity to show the world the immense growth of Rugby Mexico and we all feel blessed to be a part of this journey”.

Karmin says the biggest competition for the Women will be Russia but again, that the team is fully prepared and ready to face them head on in Monaco.

From an administrative perspective, President of the Mexican Rugby Federation, Ernesto Sainz, says despite the pandemic presenting unprecedented challenges to budgeting and sponsorship, as well as the intimidation surrounding the enormity and significance of the event, Team Mexico will face the competition with their best strength possible and with the full support of the nation.

“The players and coaching team have worked very hard to prepare for the Repechage,” he says. “The opposition will be very tough, but we believe we are ready and are very positive about how we will perform”.

When asked for deeper insight into what other elements have contributed to the journey for Mexico to Monaco, both Sainz and Duque extend their gratitude for the support they have received from a variety of individuals and organisations, without which it they say it would not have been possible for Mexico to even consider playing in Monaco.

“We have a team of dedicated volunteers who have been with us every step of the way, as well as the generous support of the Sports Institute of Mexico City, Rugby Americas North, and of course World Rugby,” says Ruben. “We hope we can make everyone proud in Monaco and really show that our hard work has paid off”.

The World Rugby Sevens Repechage Tournament kicks off in Monaco on Friday 18th June until Sunday 20thJune and will decide the final qualifiers for the Olympic Games. Rugby Sevens is said to be one of the most highly anticipated sports at Tokyo 2020 after the success of the Rugby World Cup 2019 in Japan.