The Rugby Hive Podcast was founded by World Rugby commentator Dallen Stanford and international 7s coach Robin MacDowell in July 2020. The two co-hosts played against each other on the HSBC World Rugby Sevens Series with Stanford representing the USA and MacDowell, Canada.

In 2020 they are teaming up to bring insights from legendary players and coaches from around the globe to the rugby communities across North America to inspire, engage and share. Hence their tagline “Every legend has a story, we’re here to share it!”

Stanford – originally from Cape Town, South Africa – represented the Eagles 7s from 2006-2009 helping the United States become a core team on the Sevens World Series. Since then he has worked in youth development through Play Rugby USA and in coach education with Friends of the British Council on their partnership with Premiership Rugby and USA Rugby. 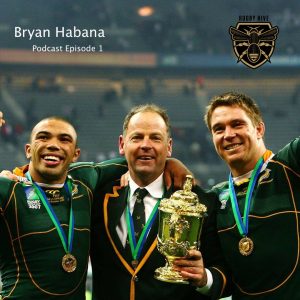 “Rugby is such a remarkable sport that unites people from all walks of life. I was fortunate to witness this firsthand in South Africa when the great Nelson Mandela became president and using sport for positive change has always inspired me” said Stanford.

For the past 8 years Stanford has been heavily involved in broadcasting, becoming a regular commentator on the HSBC World Rugby Sevens Series and locally for Major League Rugby and the Americas Rugby Championship. He was selected as one of four lead commentators for the 2019 Rugby World Cup in Japan, known for his excitement and entertaining calls.

MacDowell played for Canada on the Sevens World Series from 2005-2009, after a professional playing career in France and Italy in the early 2000’s. He has always been extremely passionate about coaching, founding his own program called MacDowell Rugby, which works with aspiring athletes across Canada and the USA. Internationally MacDowell helped Rugby Mexico Women’s 7s team make history by qualifying and taking part in their first ever Rugby Sevens World Cup in 2018. He has also been involved in several capacities with Rugby Canada through both the Men & Women’s Olympic sevens programs over the past four years.

You can listen or watch these episodes, which kicked off on July 8th with Bryan Habana.