Sophie De Goede, Alysha Corrigan and others making the most of “incredible experience” in Premier 15s 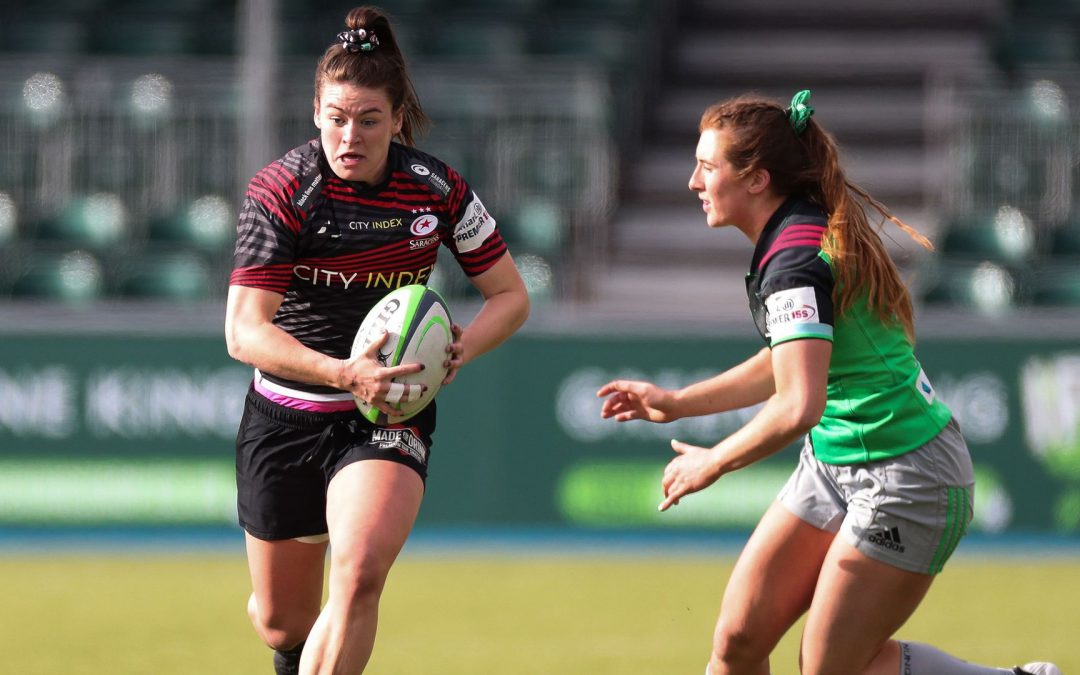 Should Saracens complete a hat-trick of Premier 15s titles next month then a group of Canadians who have called north London their home this season will have more than played their part.

Last year, as the impact of the COVID-19 pandemic on rugby in Canada became apparent, a number of the country’s test players began to explore the possibility of playing in England.

“Obviously we’ve heard of the Saracens club, it has a pretty strong name within the rugby community,” De Goede told World Rugby.

“So, to come over and be in the stadium and see the logo everywhere and then get the kit and actually then obviously put it on on the pitch and practise with the team was pretty surreal.”

She added: “I was just excited to get to play alongside everyone and just try to soak up everything that I could.

“There’s a wealth of experience within the team, so just trying to literally be a sponge and figure out what running lines people like and things like that, and I feel like it’s been really great development-wise.”

Whether playing at number eight or in the second-row, De Goede has been a near constant fixture in the Saracens team since her debut against Gloucester-Hartpury in November.

In the intervening six months she has scored four tries in 12 appearances, and in the team’s most recent match, a 38-29 defeat of Loughborough Lightning last weekend, she added a quartet of conversions.

But, De Goede had not been the only Canadian talking to Austerberry and in January the number of Canucks at Saracens swelled further with the arrival of Alysha Corrigan and Emma Taylor.

“I came in mid-season, so it was definitely a little bit intimidating — in a good way,” Corrigan, who had not played a top-level match since November, 2019, prior to signing for Saracens, said.

“Our team is filled with some of the best players in the world, and it’s just been such an incredible experience getting to train with them and play with them.”

The nature of the players’ visas means they are not allowed to work outside of rugby, and have made no money during their time in England aside from the modest match fees they receive.

De Goede has been able to continue her university studies remotely, and she and Corrigan, who lost her job prior to moving to England, have tried to ensure any spare time they have is not wasted.

“It’s just been a lot of training and rest and recovery,” De Goede explained.

“Honestly, with the extra time we’ve had, it’s been really good for us to be able to get in more film work than we’re able to do back home.

“Because we’re not contracted back home, we have to always be balancing work and or school and rugby while playing with the national team.

“So, now that we’ve been here, we’ve been able to be more full-time in our video analysis and in actually getting good sleep and things like that, that sometimes we almost have to sacrifice.”

De Goede admits that coming from North America the players’ “knowledge of the game isn’t quite where it is” in England. So, what have the pair learnt from their time at Saracens so far?

“Game management and tactical awareness on the field in terms of decision making, that’s probably the greatest rugby take away,” De Goede said.

Corrigan added: “Also being pushed out of your comfort zone. In practice, it’s just so competitive and there’s so many smart people there, just to challenge you in every aspect of the game. Honestly, it’s been great.”

Saracens are far from the only club who have benefited from an influx of players, particularly from North America, into Premier 15s this season.

Although the pandemic has prevented those players meeting up off the pitch, they remain in contact through the Canadian national team’s WhatsApp chat.

Last weekend Taylor, a second-row by trade, lined up at blindside flanker opposite DaLeaka Menin, who has won all of her Canada caps as a prop.

“It’s always nice to see a fellow Canadian on the other side of the pitch and get to catch up with them after,” Corrigan said.

Last month six Canadians started Saracens’ win over Exeter Chiefs in north London, and visiting head coach, Susie Appleby has been impressed with the impact made by De Goede.

“Sophie’s phenomenal, she’s such an athlete,” Appleby said. “She is everything that the league wants to be encouraging. She’s athletic, she’s powerful, she speaks well off the field as well.

“She just, as I said, epitomises everything that you want to be encouraging as a rugby player, whether it’s male or female.”

Exeter have enjoyed a remarkable first season in Premier 15s, beating each of the top four and compiling the league’s longest winning run (seven matches) along the way.

Appleby says that success would not have been possible without the impact made by the club’s overseas players.

Exeter’s young squad has been supplemented by internationals from Canada, the USA, Japan, Spain and the Netherlands in their debut campaign.

“They’ve been amazing, both on and off the field,” Appleby said. “They brought leadership and culture that we knew they’d bring and that’s what we needed when we started so late and with no prep and all that kind of stuff.

“So, they’ve brought that on the field, but everything they bring off the field has really driven our programme forward.”

She added: “Those senior players, those experienced players have brought that desire to help the next generation, which is just amazing.”