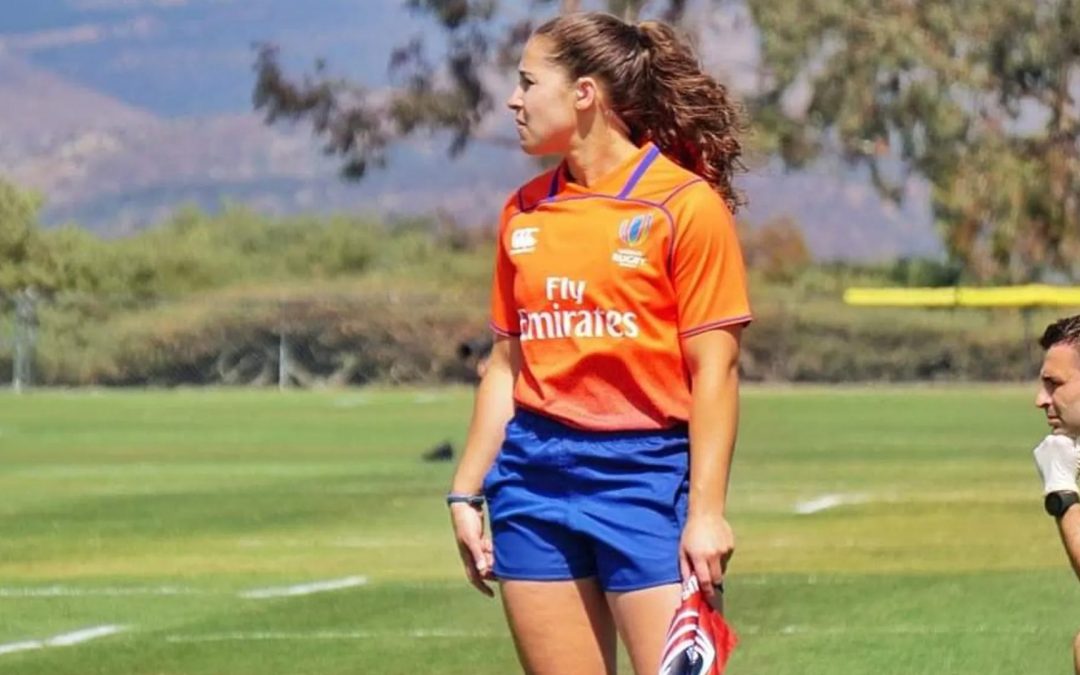 Amelia Luciano admits that she is almost constantly on the go, her time split between her two major passions: pharmacology and rugby.

By day, Luciano can be found at the University of Massachusetts Medical School’s Guertin Lab, where she works as a postdoctoral researcher and is currently studying signalling pathways in cancer and diabetes.

It is a vocation that makes demands on her time that often fall well outside of the normal nine to five, but when she took the post in 2017, she made it clear that Saturdays were reserved for rugby.

Luciano discovered the game as a student at Cornell University, and first started refereeing a decade ago, while studying for a PhD at Yale. She has since become one of the brightest prospects in the USA, and took charge of her first women’s test match in 2019. 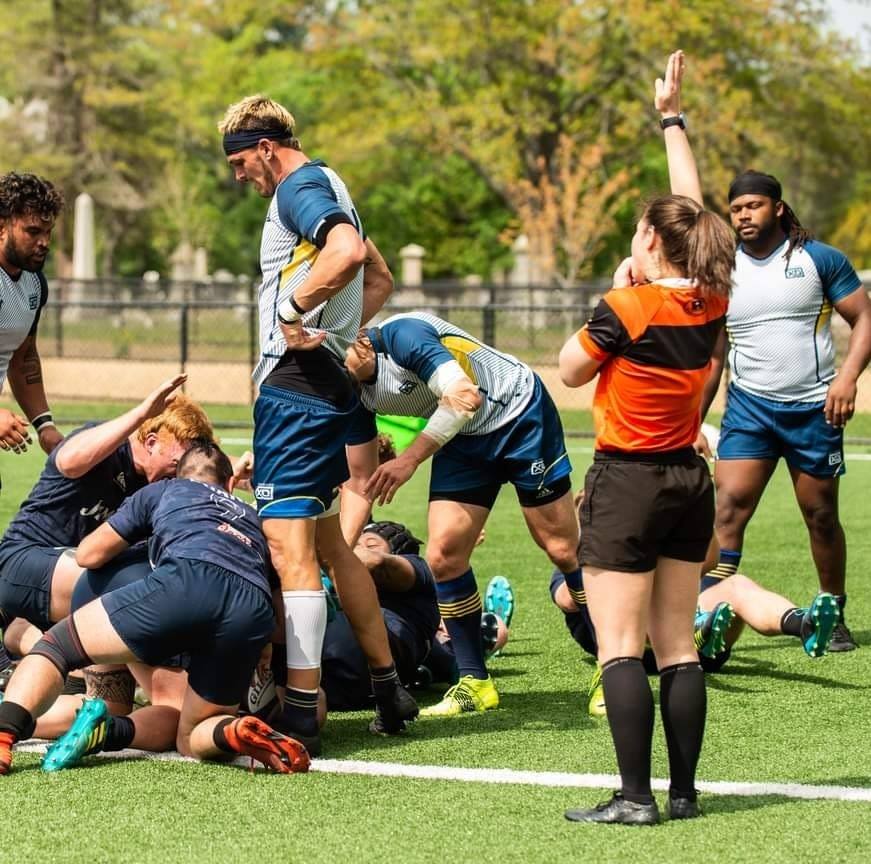 Although the COVID-19 pandemic has limited the opportunity for international travel, Luciano has continued to develop and had the opportunity to expand her knowledge further on the virtual High Performance Academy in 2020.

“I explained to my boss that refereeing is super important to me, rugby is like my second job. So, don’t expect me to be here on Saturdays because Saturday’s rugby day,” Luciano told World Rugby.

Her boss, a former triathlete, “understood that” and has been supportive when Luciano has needed extended periods of time away from the lab to pursue her officiating goals.

The two disciplines are not mutually exclusive either. Luciano, who trains six times a week, believes that focusing on her work in the lab helps to stave off mental fatigue on the pitch.

“Because I’m doing multiple experiments at a time, I think that multitasking that I do,” she said, “if I continually do that for four or five, six hours continuously for the day, or longer on some days, that really keeps me sharp and able to focus when I go to referee a match.”

Luciano was grateful for her boss’ support in 2019, a breakthrough year in which she refereed the USA’s match against the Women’s Barbarians, was selected to attend the inaugural World Rugby Women’s High Performance Academy in Stellenbosch and took charge of her maiden test.

Travelling to South Africa for the Women’s HPA brought Luciano into contact with emerging referees from around the world, and enabled her to learn from three vastly experienced match officials, Alhambra Nievas, Alain Rolland and Chris Pollock.

“I got to meet a ton of new people who were kind of all at the same stage of their career that I was,” she said.

“We watched film review sessions, like, ‘Would you call this a penalty? Yellow card, red card?’ Sessions on all of the major parts of the game, breakdown, foul play, lineouts and scrums.

“That was really neat to me because some of the things that I thought I would call were quite different than what the World Rugby standard was and hearing it explained why that would be, and from some of the formerly best referees in the game who are now the ref managers or were the ref managers at the time, was really, really great experience.

“And, being able to ask them those questions live was an experience not everybody gets to have. So, I think I took lots of notes and tried to absorb as much as I could.”

Two months later, Luciano was tested on her new knowledge when she was selected as part of the match officials team for the test series between the Wallaroos and Japan in Australia.

“When I found out that I got the assignment, I was like ‘Aaah!’— just super ecstatic, I couldn’t believe it. I’m like, ‘Oh my God, Alhambra Nievas knows my name and thinks that I can referee at this level!’” she said.

“That’s like a fan-girl moment, I guess. And then actually planning for that trip was quite stressful.

“I had two undergraduate students who were working with me for the summer, and I was about to take a month off, two weeks to work on the Super Series and then two weeks to be in Australia for the test there, and assistant refereeing a second test match.

“So planning for that was a lot of work, but totally worth it. I got my students up to speed, they could do my work for me while I left and then spent the month learning and travelling.”

Luciano added: “It was really the first time (for her) that the game was televised, being in Australia and having it on Fox Sports.

“I was super, super nervous as we were about to kick off. I remember thinking, ‘oh my God, my heart rate must be maxed out right now. I feel like I’m going to throw up, I’m going to have to go to the bathroom. This is so awful’.

“And, then as soon as I blew the whistle, I was like ‘oh, this is just rugby. It’s just a game. It’s fine’. This game isn’t higher speed or different than the rugby that I referee every week at home.”

‘WE ALL WANT TO GIVE BACK’

Although the COVID-19 pandemic has limited the opportunity for international travel, Luciano has continued to develop and had the opportunity to expand her knowledge further on the virtual High Performance Academy in 2020.

She has also gained experience as an assistant referee at New England Free Jacks home matches in Major League Rugby, and last weekend, got to work with Rugby World Cup referee JP Doyle.

“You get to see the person’s personality when you’re working with them that you don’t get to see if you’re just watching an international match on TV or doing a video review,” Luciano said. 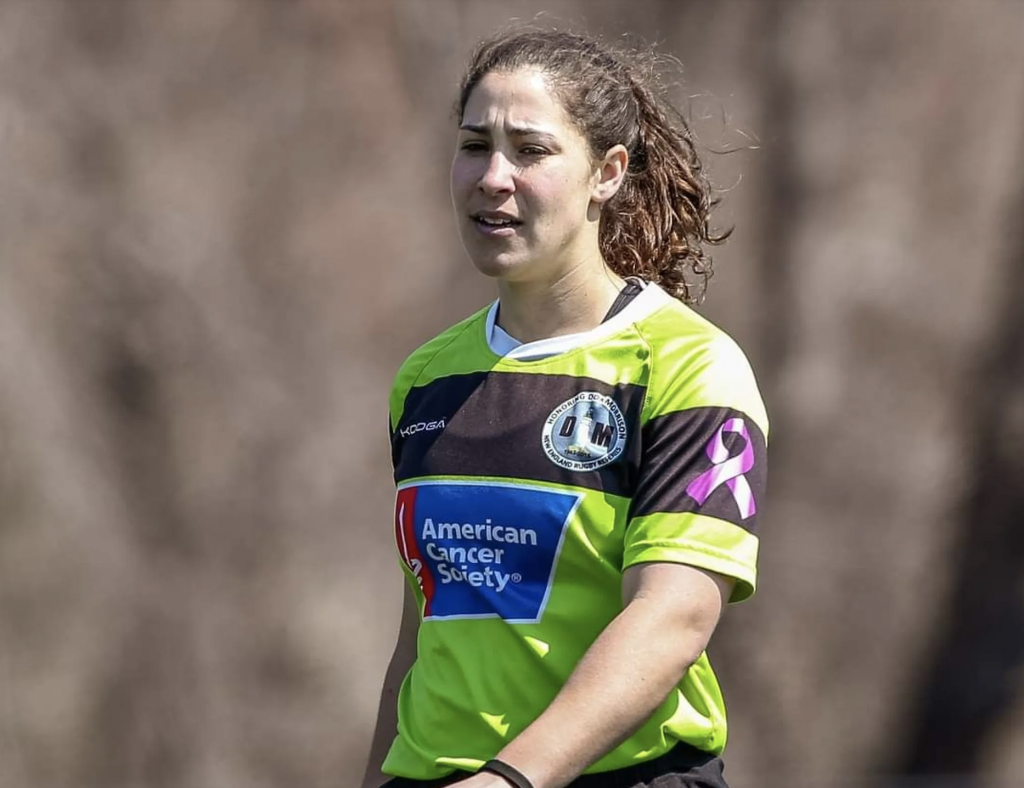 Luciano discovered the game as a student at Cornell University, and first started refereeing a decade ago, while studying for a PhD at Yale.

“That’s the part for me that’s the most interesting, is seeing the rapport that they have with the players and how the players respond to certain things.”

Luciano’s journey through the refereeing ranks has not been a completely smooth one, and she admits having some low moments when she was spat at and verbally abused on the pitch.

However, she says subsequent positive encounters helped to “sweep away” those bad incidents and Luciano now provides mentorship to young female referees in New England, in the hope she can create an environment in which they can flourish.

“I enjoy it and I find value in it, and I think for us to continue recruiting referees, it’s important that we have the mentorship component, we have support systems and give people resources so they know who to talk to in what situation,” she said.

“We all just want to give back to the game. I think that’s part of what being a referee is, at least when you start; staying involved and doing your part.

“And, I just want other people to be able to experience that and if they are going through the same hardships that I went through that they have a network to stay connected to.”