World Rugby continues its countdown to the Rugby World Cup 2021 Draw by taking a look at the USA’s history in the tournament.

The USA are one of only three teams to have tasted glory at a women’s Rugby World Cup. Having beaten England in the inaugural final at Cardiff Arms Park in 1991, the USA were losing finalists in both 1994 and 1998 at the hands of England and New Zealand respectively. A relatively lean 19 years followed until the Women’s Eagles returned to the semi-finals at RWC 2017.

We take a look back at the USA’s Rugby World Cup story. 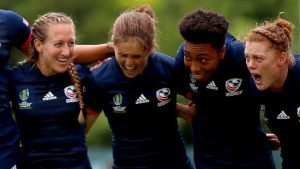 USA Rugby at the 2017 Rugby World Cup in Ireland

Most memorable match: The USA met England in the first inaugural Rugby World Cup final in Cardiff in 1991. Having conceded an early penalty try – the first points scored against them in the tournament — the Women’s Eagles put on a masterclass. Tries from Clare Godwin and Patty Connell, as well as seven points from the boot of fly-half Chris Harju, helped the team to a 19-6 win and a place in history (pictured).

Iconic moment: USA looked in danger of slipping out of the top four on the final day of pool play at Ireland 2017, as they trailed England late on. That was until Kris Thomas scored one of the tries of the tournament to secure a bonus point for her side. Starting inside her own half, Thomas beat Vicky Fleetwood and Danielle Waterman on her way to the line.

Low point: Having reached the first three Rugby World Cup finals, the USA opened their 2002 campaign with an 87-0 defeat of the Netherlands. However, that was as good as it got as they lost subsequent matches to France and Australia, finding themselves in the seventh-place final. That match was won – 23-5 against hosts, Spain – but seventh remains the team’s lowest finish in the tournament.

Iconic player: Patty Jervey. One of two American women to be inducted into the World Rugby Hall of Fame, Jervey was the first player to appear at five Rugby World Cups. The winger, who was 42 when she played at RWC 2006 in Canada, twice scored five tries in a match.

Did you know? Amy Westerman scored at least a hat-trick in each of her first three Rugby World Cup appearances. Having scored six tries against Japan at RWC 1994, she followed up that effort with three against Ireland two days later. Her third tournament appearance came at RWC 1998, when she scored three tries and kicked two conversions against Russia. In total, Westerman scored 14 tries in just seven Rugby World Cup appearances.

Quote: “It’s crazy, but I remember very little of the final. Most of the snapshots in my brain are just that, snapshots that friends and family took and shared. But I do remember looking up at the scoreboard after the final whistle, seeing 19-6 and thinking ‘holy sh*t, we did it!” – Patty Jervey on the USA’s success in 1991.