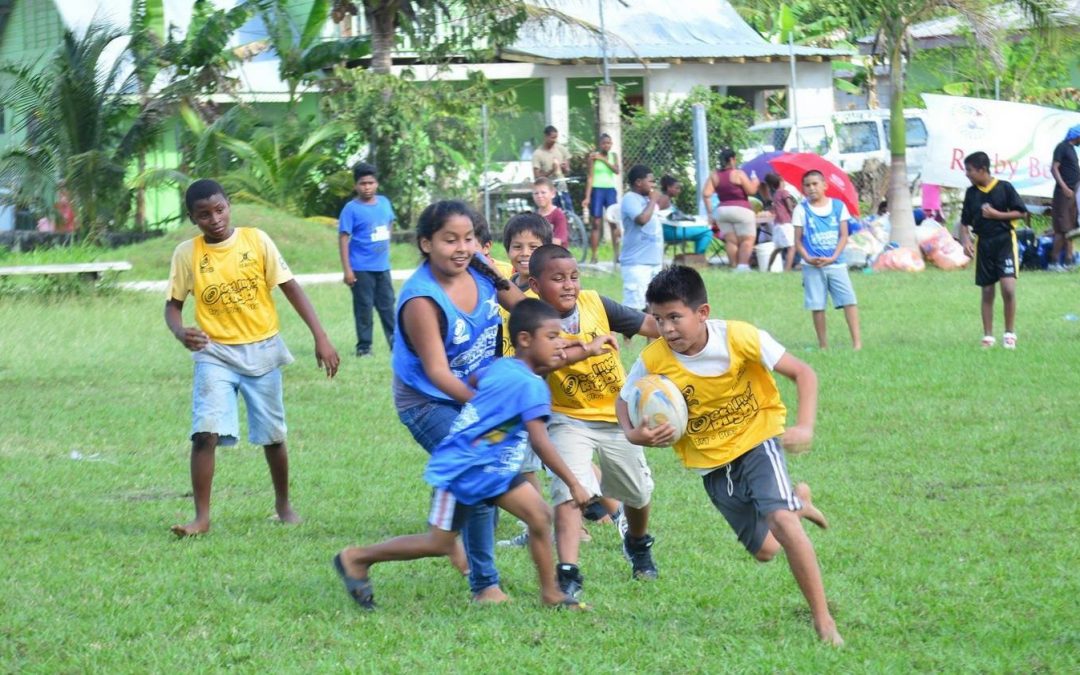 The calendar is always full for RAN’s Rugby Development Manager, Scott Harland, and this past month was no different. In December Harland made stops in Belize and Aruba to check in on rugby’s growing presence in the two countries.

In Belize, Harland’s home base was Belize City, where Tony Gillings has been based for the past few years. Gillings founded Rugby Belize in 2012 while he was still traveling back and forth from the UK, but as rugby gained traction, Gillings decided to make the move to the country full-time to devote himself to growing the game. He’s introduced the game to community groups, police cadets and schools.

“Tony Gillings is a true activist for rugby,” said Harland. “He has put his time and resources into bringing this great game to the people of Belize. Tony is an example of how rugby starts in new populations; through committed individuals that tirelessly promote, organize, coach and recruit until they have a team, then a league and someday soon in Belize, a national federation.”

Gillings with a group of Get Into Rugby kids.

With a few Get Into Rugby kits and practice plans from RAN, Rugby Belize was able to offer rugby in a several communities in this Central American country. The Belize Olympic Committee has also expressed interest in further supporting and establishing rugby in Belize.

In the past Gillings was averaging 3-5 kids attending weekly rugby sessions at the local sporting complex. After Harland’s early December visit in which he conducted a level 1 coaching course for three participants and visited three schools to promote and deliver rugby sessions, there was enough interest in the sport for Gillings to add an additional weekly rugby session. He’s now seeing 16-20 kids regularly come out to play rugby and there are plans to form three school-based clubs in the city, with the possibility of another school in February.

“Rugby in Belize has ambition – although we are the pioneers for the sport here and we started small, we are aiming for the Olympics and the Commonwealth Games in the future”, said Gillings. “The youngsters who have tried rugby keep coming back; they love the physicality and the camaraderie, which is something many of them don’t experience elsewhere.”

“Personally, I’ve always been a fan of rugby. I wrote about the benefits that rugby could have for a developing country like Belize where opportunity and options for the youth were poor to non-existent. I get a lot of satisfaction knowing that even as I’m writing this some of the Belizean rugbiers are out on the training field, with mud on their kit, most probably water in their trainers too and huge smiles on their faces. Amongst those huge smiles there’s another Lomu, another North, another Isles—I am sure of that. And like every other coach, my job is to find them.”

Like Belize, Aruba’s rugby story starts abroad. Several years back, Firozh Moeharram and Gijs Van der Pol played on the Dutch national police force and together helped to organize a still successful international police competition in the Netherlands. When their law enforcement jobs brought them to both Aruba, it was only a matter of weeks before building rugby in Aruba became a passion project for the two transplants.  The first trainings took place on Eagle beach, which boasts the widest beach in Aruba and is famous for its pristine and soft white sands. According to Van der Pol, head coach and ex-international for Holland, Arabians immediately showed a strong enthusiasm and potential for rugby.

“Arubians are physical people; they like contact sports, and have the physique for rugby,” said Van der Pol.  “There is still a lot to do, to learn rugby, so we started with beach rugby—obviously because of the opportunity the great beaches of Aruba gives us, and because of the popularity of beach sports on Aruba. Eventually we want to help Aruba grow into a country with a regular 15 a-side competition, even with an Olympic sevens ambition.”

With beach sports an important part of the Aruba sports scene and the World Beach Tennis Championships hosted annually, several permanent beach sports facilities already exist. After meeting with the Minister of Sport and the Olympic Committee, Van der Pol and Moeharram have their sights set on adding beach and turf stadiums in the future, as well as using both groups’ support to increase sports tourism, boost playing numbers and create regional qualifiers.

Earlier this month Harland delivered a level 1 coaching course for 6 participants, and worked with the rugby committee to develop a plan to divide Aruba into districts and establish teams from each district. The ultimate goal is to establish a domestic competition in beach and sevens, and eventually fifteens rugby.

Harland leads a Training and Education Course in Aruba.

In the short-term, the two hope to keep up the training and to organize at least one game every six weeks. They’re hoping to participate at the World Police and Fire Games in the summer of 2017 and in fall host the first Arubian Beach rugby tournament.


Moeharram and Van der Po encourage new players and visitors to the island to check out a training session on Sunday’s and Tuesdays at Moomba Beach at 7:30 p.m.


FROM GRASSROOTS TO MEMBERSHIP

“Each year I travel to over a dozen countries, some big and some small—some with strong rugby programs and some just getting started—to help develop Rugby in one way or another,” said Harland. “While I  am very encouraged by the growth I see in all of them, I am always particularly excited to see rugby take root in new communities and countries. We’ll be following developments in these locales closely and doing whatever we can to ensure rugby continues to gain traction there.”

There are currently 13 full members of RAN, three Associate Members and two Regional Development Unions. RAN’s goal is to have over 20 members by 2019. Unions must apply for Associate Membership of RAN and after one year are eligible to apply for Full Membership. Full Membership is contingent upon several key performance indicators, including adherence to government structures, development strategy, financial considerations and evidence four teams competing annually in a fifteen-a-side league. Unions in full membership of RAN may also apply for World Rugby membership after one year.


Aruba Rugby and Rugby Belize are both on Facebook. You can also reach the unions via email at arubarugby@gmail.com or tonygillings@hotmail.com.