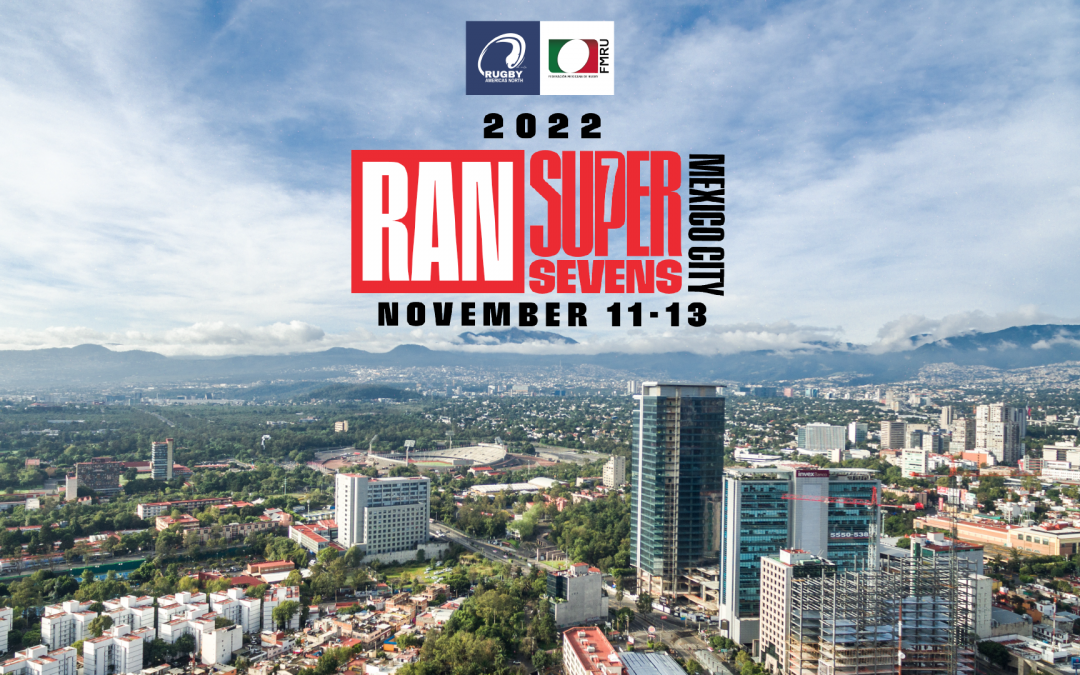 With the Rugby Americas North (RAN) Super Sevens just around the corner, the Mexican Rugby Federation (Rugby Mexico) says they are more than excited to be hosting the biggest ever tournament in RAN history.

Held from November 11-13 at UNAMs Deportivo Alfredo Harp Helu grounds, the three-day tournament will not only feature Senior and Age-Grade divisions for Men and Women, but also act as a qualifying tournament for both the 2023 Centro Caribe Games (formerly CASCO Games Sevens) and the 2023 Pan American Games.

The top two Senior Men’s and Women’s teams from the Super Sevens will compete in Chile at next year’s Pan American Games, alongside the USA and Canada (who have already qualified), while the qualifying criteria for the Centro Caribe Games is still yet to be determined.

World-Class Location
Mexico is no stranger to hosting large-scale rugby events, previously being selected to host many RAN Sevens competitions, U19s and Women’s 10s tournaments, international 15 a-side fixtures, as well as impressively the 2014 Centro Caribe Games – to be held in Heroica Veracruz, Mexico.

President of the Mexican Rugby Federation, Ernesto Sainz, says this year’s RAN Super Sevens tournament marks a pivotal milestone in rugby history, bringing together the best Men’s, Women’s, and Age-Grade bracket ruggers in the region all in one world-class location to continue to develop and grow the sport to reach new heights.

“The RAN Super Sevens will promote a positive message particularly among our younger athletes and will show them that high performance sport is a reachable goal with a wealth of opportunities,” he said. “Youth development is crucial to rugby and it is our hope that this tournament will not only grow the sport globally, but also help to promote investment in the strengthening of our local structures (especially at the youth level) and ultimately enabling us to bring rugby to even more girls and boys in Mexico.”

Excited to Host
Sainz says Rugby Mexico is thrilled to once again be bringing international rugby to Mexico City and to be strengthening ties with other nations and cultures of the region.

“We welcome all RAN athletes and Union members to Mexico for the RAN Super Sevens for a fruitful and productive tournament,” he said. “We want to continue to develop the solidarity amongst RAN members and show the world our commitment to growing the game on the global stage.”

Ernesto says the Mexican Rugby Federation also has high hopes of showcasing rugby to the local sporting community as a special and inclusive sport with the power to uplift and inspire.

“Rugby can be played by all kinds of shapes, sizes, weights, ethnicities, and genders,” he said. “Our values are positive and lifechanging, and we want to show all of Mexico that it is a sport that can add much positive input into our communities as well as be a competitive against other options like soccer, basketball, and other traditional team sports.”

Bringing the Spotlight on Rugby
Rugby Mexico President Sainz says the upcoming RAN Super Sevens will provide the perfect backdrop to be able to show potential investors and sponsors that rugby is a viable commercial option and to assist to secure more lucrative sponsorship deals for the sport.

“The rugby community is a huge worldwide network,” he said. “We bring a large fan base and with that comes prime exposure for sponsors which supports their efforts to generate awareness of their products and services. More of these kinds of partnerships will be critical to the development of rugby in the region and hopefully the Super Sevens can really push rugby to the forefront and into the spotlight to be able to attract further interest and investment from corporate entities.”

Ernesto says the RAN Super Sevens will additionally go a long way in highlighting popularity of rugby from a broadcast perspective.

“Rugby is a very popular sport in terms of viewership,” he said. “This tournament that we are privileged to host in Mexico I hope will emphasize this to broadcasters and assist to get rugby more airtime on network and cable television, as well as on the various streaming channels.”

Get ready!
The Rugby Mexico President says the local rugby community is eager to warmly receive all rugby guests and to hold a high-quality competition amongst national teams from throughout the region.

“We look forward to being an extraordinary host and organizing a tournament that will allow all of our rugby friends to come together in Mexico City,” he said. “After a tumultuous two years, we are certain that this tournament will re-ignite and trigger our efforts in growing and developing a larger and better prepared community of girls and boys, youth and senior players, coaches, referees, medics, and managers.”

For all the latest stories about rugby in Mexico, visit https://rugbyamericasnorth.com/category/member-news/mexico/.