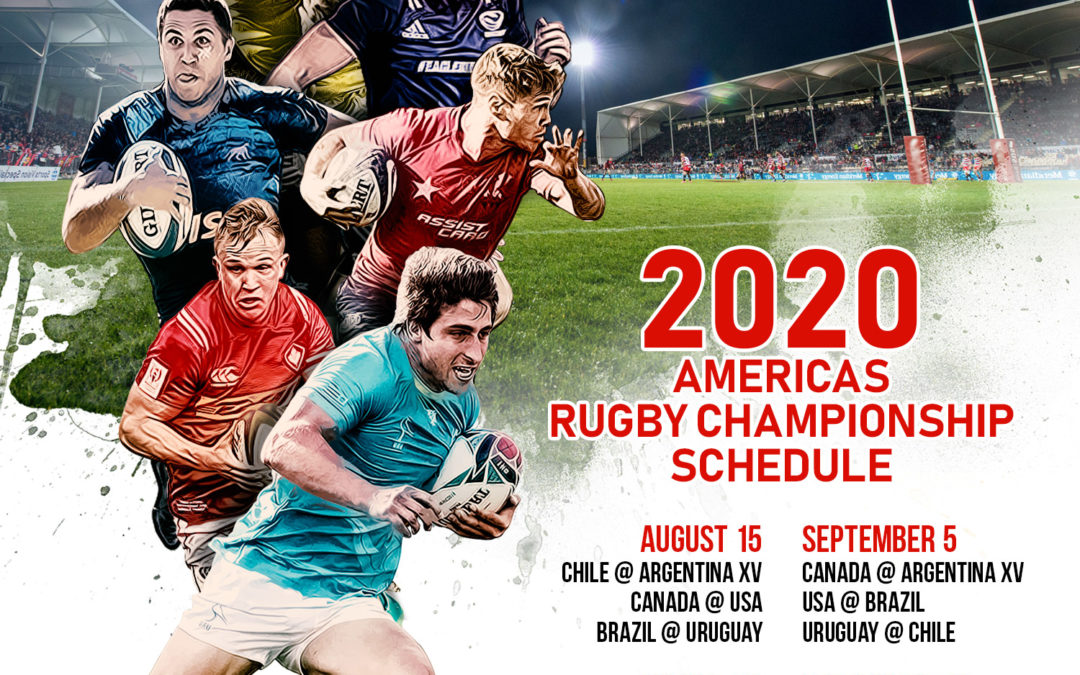 December 3, 2019 – Today, Rugby Americas announced positive changes to its senior men’s XV competition structure in order to further assist the growth of the game across the region by minimizing the conflict amongst competitions.

The 2020 schedule announcement aligns with the global competition calendar and occurs just weeks after the record-breaking 2019 Rugby World Cup (RWC) wrapped up with South Africa lifting the Webb Ellis Trophy in Tokyo.

The new calendar focuses on optimizing high performance outcomes for players in the Americas region while minimizing conflict with club & professional duties January through June.

The third season of Major League Rugby gets underway in February, and last Friday the inaugural season of the Súperliga Americana de Rugby was announced in Montevideo, Uruguay to boost competition across South America.

The newly formed six-team competition includes franchises from Argentina, Brazil, Paraguay, Uruguay and Chile, while another from Colombia will join in 2021.

The change in dates allows for an uninterrupted pre-season and professional competition for athletes in North and South America and a perfect window for national team coaches to evaluate those they want to invite into their assemblies for national duty. The traditional June test match window will now shift to July, before teams compete in the ARC in August & September.

The annual November test window will remain the same.

The six-team round-robin ARC features Argentina XV and the national teams of Brazil, Chile, Canada, Uruguay and USA. In 2020, the competition will take place over five consecutive weekends. Announcements will be made in early 2020 with specific city and venue locations for each match.

In 2020, last season’s champions, Argentina XV will begin their quest for their third tournament title at home against Chile on August 15th before heading out on the road to face Uruguay on the 22nd and Brazil on the 29th. Following a home fixture against Canada on September 5th, they will end their campaign against two-time winners USA – the only other team to lift the coveted trophy – at home on September 12th.

Since its inception in 2016, the ARC has been vital to the growth and development of rugby across the Americas, with four nations qualifying in the recent RWC in Japan. Rapidly rising Uruguay pulled off one of the most exciting upsets of the tournament, knocking off heavily favoured Fiji 30 – 27 in Kamaishi City.

In addition to the ARC, the Americas Rugby Challenge (ARCh) has been underpinning growth throughout the Americas over the last two years.

Moving forward, the winner of the ARCh – which is currently being contested by Colombia and Paraguay representing Sudámerica Rugby, along with Mexico and the 2020 TBD Champion from Rugby Americas North – will play a one game playoff against the 6th place finisher from the ARC for a promotion – relegation showdown.

The one-game playoff, held at the location of the 6th place finisher from the ARC, will take place during the November test match window.

Following the similar format of the last two years, the 2020 edition of the tournament will take place between August 22nd to 30th, with the location still to be confirmed. The four competing nations will square off in three double-header game days on the 22nd, 26th and 30th, with the winner being decided by accumulated points.

Colombia, ranked 33rd, has dominated the competition over the last two years, lifting the trophy on back-to-back occasions, both without conceding a single loss in the tournament.

Mexico made history in the 2019 edition by picking up their first-ever victory over now 46th seeded Paraguay, which vaulted them to their best-ever 44th position – a climb of seven spots. The 2019 Rugby Americas North 15-a-side Champions, Cayman Islands, rounded out the competition in 57th position.

“There has been a lot of hard work, cooperation and contribution amongst all member unions within the Americas to build Under-20 competitions that underpin, both, the Americas Rugby Championship and Americas Rugby Challenge.  We now have that and a pathway for ARCh champions to challenge for entry and promotion up to the ARC.  It is precisely the merit-based competition model we wanted to create across the Americas.  If teams/unions perform, they earn the opportunity to progress upwards.’

“Over the last two years Major League Rugby has provided an invaluable high-performance platform for domestic growth in North America and last Friday’s launch of the Súper Liga Americana in South America is another exciting step for the Americas. Today’s announcement ensures a proper year-round schedule for clubs, unions and athletes to maximize performance in both professional and national team environments.”

August 29:
Argentina at Brazil
Chile at Canada
Uruguay at USA