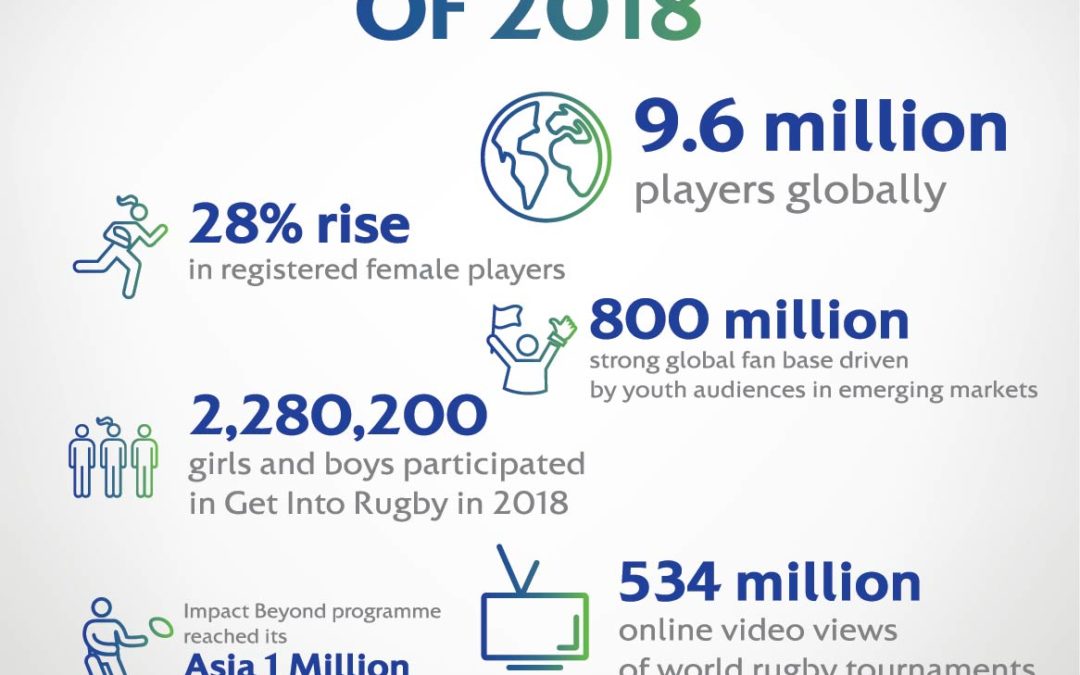 A record number of people are playing rugby worldwide as the sport continues to grow and prosper across the globe, according to the World Rugby Year in Review 2018.

The sport’s unprecedented growth continued in 2018 with 9.6 million men, women and children playing the game around the world. This includes 2.7 million women, up 10 per cent on the previous year and accounting for more than a quarter of the total global playing population.

Excitingly the total number of registered female players grew by an impressive 28 per cent to 581,000 across World Rugby’s member unions. This comes during the first full year of implementation of World Rugby’s ambitious plan, Accelerating the global development of women in rugby 2017-25, which aims to support the growth and development of the women’s game and promote parity.

That success was matched off the field by increased engagement levels from female fans – 38 per cent increase in video views by women and the growth of the World Rugby and Rugby World Cup female audience on Twitter to more than 30 per cent. It was also reflected in increased diversity at the highest levels of the game in a year when World Rugby added 17 new female members to its Council and New Zealand was named as first-time hosts of Women’s Rugby World Cup 2021.

Underpinning the growth across both men’s and women’s rugby is World Rugby’s development programme Get Into Rugby, which acts as a gateway for young people to try, play and stay in rugby. For the second consecutive year more than two million girls and boys (2,280,200 with 40 per cent female participation) enjoyed the sport and everything it has to offer. More than 4,000 Get Into Rugby activities took place from Kathmandu in Nepal to Kitwe in Zambia, hosted by 159 registered unions and expanding the sport’s global reach.

In Asia, the popularity of Get Into Rugby helped World Rugby’s Impact Beyond legacy programme reach its goal of one million new participants nine months before Japan is due to host Rugby World Cup 2019, setting the stage for a game-changing tournament. Project Asia 1 Million is a central pillar of World Rugby’s mission to grow the game locally and ensure Japan 2019 – the first ever Rugby World Cup to be hosted in Asia – is the most impactful Rugby World Cup to date.

Other highlights in 2018 included the second Youth Olympic Games Rugby sevens tournament in Buenos Aires, won by Argentina (men’s) and New Zealand (women’s). Meanwhile, Rugby World Cup Sevens in San Francisco saw 100,000 fans across three days create an incredible atmosphere inside the iconic AT&T Park, with a US broadcast audience of nine million tuning in, many watching rugby for the first time. This helped drive even greater interest in the sport, which now boasts a global fan base of 800 million worldwide, driven by young people consuming sevens digital content in emerging markets like the USA, China, India and Brazil.

Off the field, player welfare remains World Rugby’s number one priority with the international federation focusing on evidence-based injury prevention at all levels of the sport. Alongside its ongoing focus on research, World Rugby’s training and education programmes remain core to its strategy, with more than 2,700 training courses delivered worldwide in 2018.

World Rugby Chairman Sir Bill Beaumont said: “2018 was another special year for rugby as we watched the sport continue to prosper and grow both on and off the field. Within a total playing population of 9.6 million it was fantastic to see our Get Into Rugby programme – run in partnership with unions and regions – continue to break participation records with over two million girls and boys worldwide getting involved for the second year in a row amid a growing global fan base of 800 million.

“As Rugby World Cup 2019 fast approaches, it was particularly pleasing to see our Impact Beyond programme surpassing all expectations in Asia in 2018, reaching its target of one million new participants in the region a full nine months ahead of schedule. With the tournament expected to be game-changing in every respect, the stage is now set for the most impactful Rugby World Cup ever.

“From a women’s rugby perspective, 2018 was a breakthrough year as we began implementation of our groundbreaking strategy to accelerate the development of women in rugby at all levels. Progress was evident with increased participation and engagement levels as well as in the governance of the sport, where we welcomed the first women onto World Rugby Council. We continue to strive for even greater parity in 2019.”

READ THE WORLD RUGBY YEAR IN REVIEW 2018 IN ENGLISH >>

READ THE WORLD RUGBY YEAR IN REVIEW 2018 IN SPANISH >>