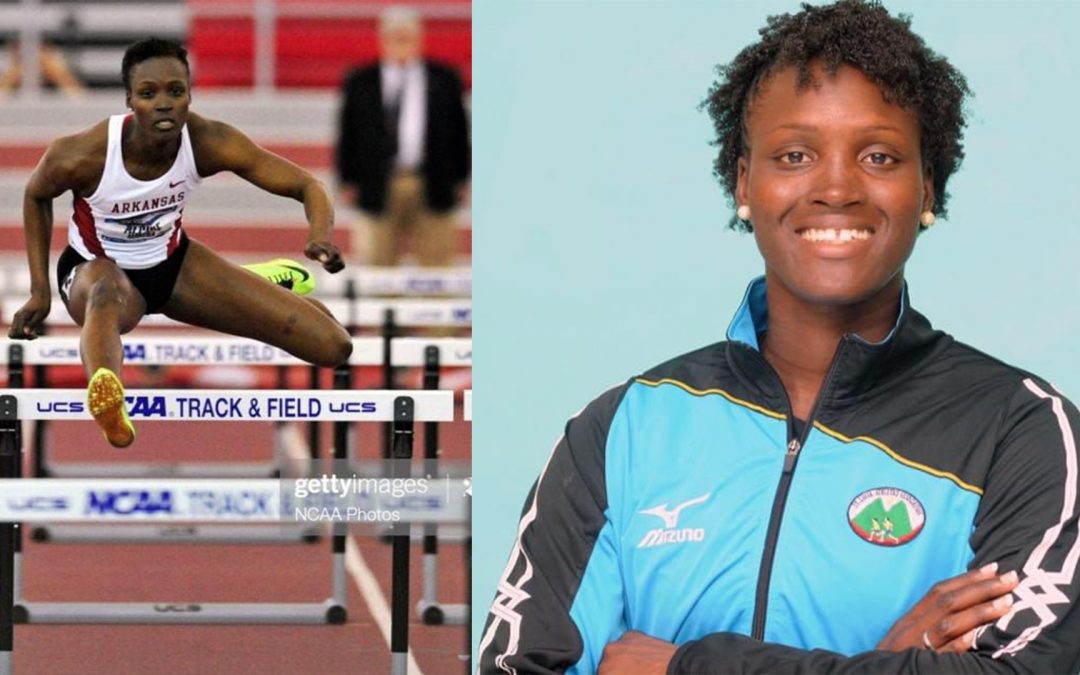 “I honestly had not considered playing rugby at all. I thought it was too aggressive for me,” says former track and field athlete turned national rugger Makeba Alcide.

However despite her initial reluctance, last year 31-year-old Makeba made the switch to rugby after 18 years as a pentathlon and heptathlon star (even completing a scholarship at the University of Arkansas) and has not looked back.

It was only after failing to qualify for the 2018 Commonwealth Games that Alcide decided to retire from athletics. She spent the next few years looking for different ways to keep up her fitness levels, even going back to playing netball, before deciding to give rugby training a go during the height of the COVID-19 pandemic in 2020.

Since then, Makeba admits she has been bitten by the ‘rugby bug’ and now looks forward to competing for St. Lucia on the world stage as the international return of rugby recommences as soon as possible. 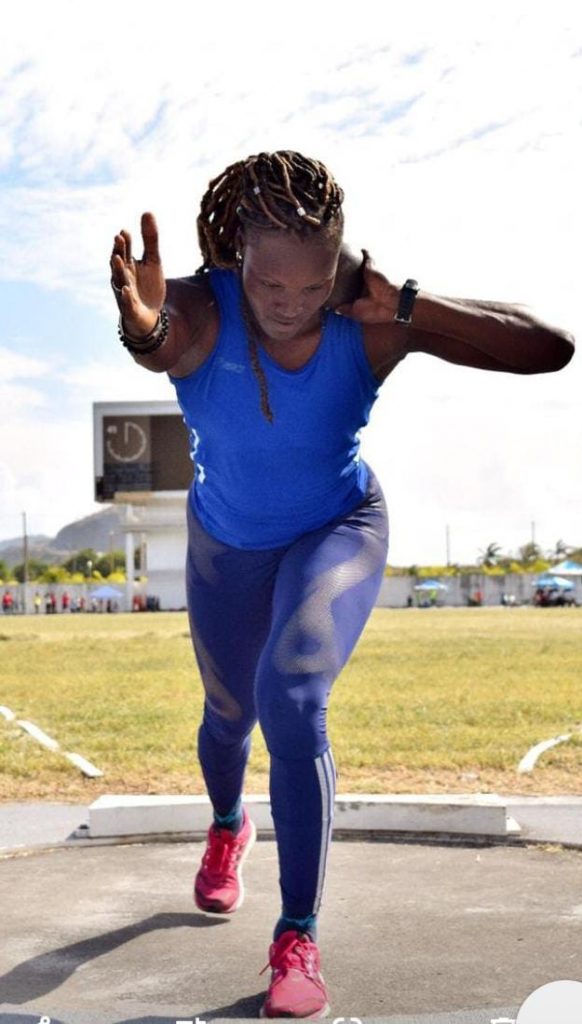 “I got into track and field when I was 8 years old and competed in that arena for more than half of my life,” says Alcide. “Track and field is a big part of who I am. It taught me to overcome my fears – without those experiences I would not be who I am today.”

As an indoor pentathlete and outdoor heptathlete, Makeba competed in the 60m and 100m hurdles, high jump, long jump, shot put, javelin, 200m and 800m, and impressively holds both national and regional records for various events.

“My favorite event was the high jump because I was actually afraid of heights so it always gave me a huge rush,” she says. “I have a lot of memorable moments, but my best season was in 2013 – after overcoming numerous injuries, I won both the South-Eastern Conference Indoor and Outdoor titles and broke the NCAA Indoor Pentathlon record, creating history for St. Lucia, the OECS, and my University. That was a really big moment for me.”

Another big moment for Alcide was when she competed and came second overall at the 2007 CARIFTA Games in St. Lucia; even carried out on a stretcher after running such a hard race. University recruiters notoriously use these Games to spot talent, however an exhausted Makeba was unable to meet with any interested coaches after giving it her all on the track.

“A friend who attended the University of Missouri got some coaches’ information for me but because she wanted me to go to Missouri, she ‘lost’ the business card of a second interested coach, only mentioning that they were from the University of Arkansas,” she says.

“There are several universities in Arkansas so I was not sure which one it was,” she says. “So, I just took a chance and reached out to the Fayetteville Campus but when I didn’t hear back from them, I took it as a sign and decided to stick with Missouri.”

However, as fate would have it, just as Alcide was about to commit to Missouri she got a call out of the blue from the Fayetteville Coach at the University of Arkansas.

“I later found out that it was the same Coach who had left me the card at the CARIFTA Games,” she says. “I took this as another sign and went on to study there in 2010, graduating in 2013 with a Bachelor of Science in Kinesiology – Applied Exercise Science.” 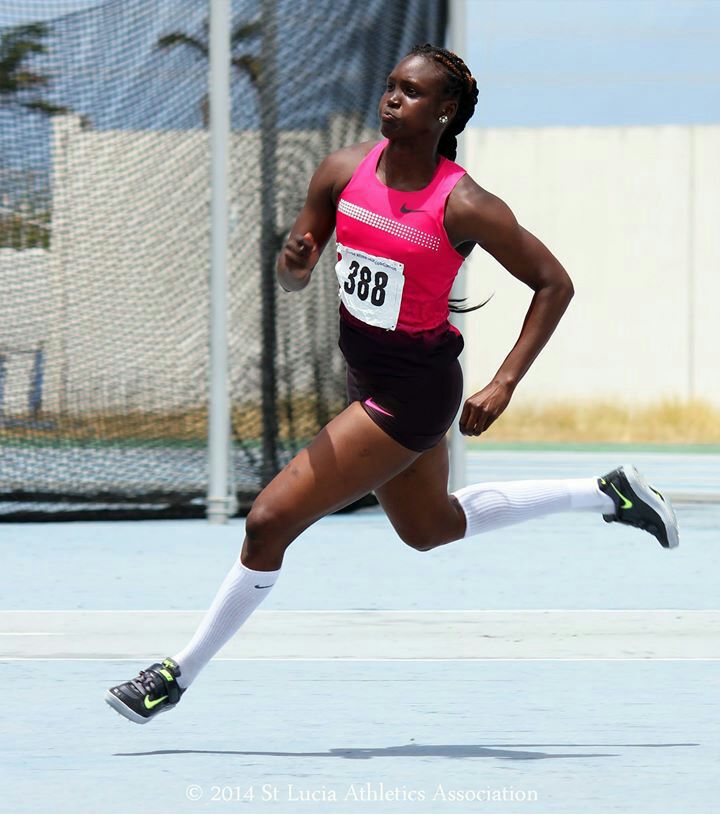 In 2018, Alcide officially hung up her spikes and retired from track and field, leaving a legacy as one of St. Lucia’s most outstanding junior athletes.

“It was becoming difficult to balance work and life with being a semi-professional athlete so I made the tough decision to retire after I did not make the 2018 Commonwealth Games team,” she says. “I stopped doing high intensity training but I still wanted to keep fit so I went back to playing netball which I had played competitively in high school. Rugby was still nowhere on my radar, although I had been approached to play multiple times before.”

Fast-forward to 2020 – right in the midst of the COVID-19 pandemic. Makeba says she was stuck at home doing workouts to maintain her fitness until one day a young man invited her to come along and check out some local beach rugby training.

“I asked him for the information of the rugby Coach (Wayne Pantor) who had actually previously invited me to train but I never went,” she says. “I just really wanted to get out of the house so I decided to call him and do some private sessions before officially joining the training squad. It helped me to get a more solid understanding of the game and to gain the confidence to try it out for real.”

Alcide was then recruited to the Renegades Rugby Club and participated in small local tournaments – starting with flag, then touch, and slowly transitioned to tackle.

“I had the best time learning and growing,” she says. “I started to find myself watching videos of matches and reading into plays and the rules of the game more and more.”

Not too long after this, Makeba was named to the National team for the 2022 RAN Super 7s Tournament (postponed) to participate in her first international competition representing St. Lucia.

“I honestly didn’t ever consider myself good enough to be on the National team,” she says. “I just kept challenging myself to become better and I ended up being selected. Rugby has given me such a different perspective – it’s a team sport which is different to what I was used to with track and field, but I love it – the community and my teammates are so supportive.” 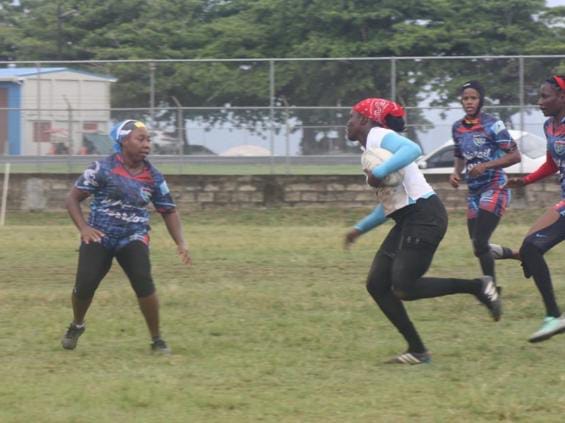 What will the future hold?

Alcide says that post COVID-19, she is most looking forward to competing for St. Lucia and getting some international experience to develop her skill set.

“I am also looking forward to our team evolving as a whole,” she says. “Right now, we have a solid team that can do some serious damage, so I am fully committed to growing with my teammates. Our goal is to qualify for the 2024 Olympic Games.”

Moving forward, Makeba says she will also continue in her role as volunteer coach to 21 local track and field athletes in St. Lucia.

“As a coach, I strive to create not only a high-performing athlete, but also a well-rounded individual,” she says. “To me, this includes serving others and doing things like Christmas Food Drives in our community. And, I am always encouraging my track athletes to join the sport of rugby to broaden their horizons and to learn to be part of a team. The comradery is amazing and I would recommend anyone give rugby a try – it is just so rewarding.”

Over the years, Makeba has been involved in various community outreach activities, especially in the USA visiting schools to read to children and hosting food drives and clean up campaigns.

She is also part of a program called ‘Athletes For Hope’ which connects athletes with different schools to help motivate young children.