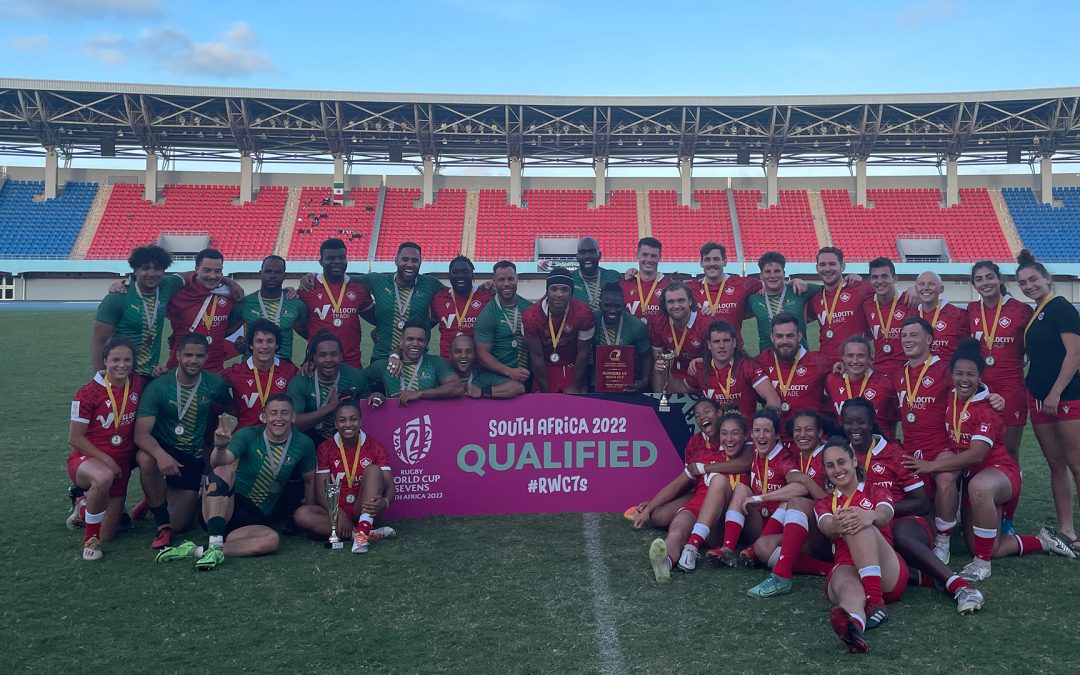 This past weekend’s hotly-anticipated 2022 RAN Sevens Qualifiers in the Bahamas saw many of our teams in the region making their official international return to play.

The two-day event doubled as a Qualifier for both the 2022 Commonwealth Games in Birmingham England and the Rugby World Cup (RWC) Sevens 2022 in Cape Town South Africa, and with the stakes high for everyone involved, the tournament did not disappoint!

The Canadian Women’s team took out Mexico to secure their place at the RWC Sevens in South Africa, while their counterparts – the Canadian Men – defeated Jamaica to book their ticket to both the RWC Sevens.

Men’s Runner’s Up Jamaica will also join Canada and represent RAN at the Commonwealth Games in England, as well as take on this year’s RWC Sevens in Cape Town.

Cooper Coats from Canada’s winning Men’s team said that after winning at RAN 2022, the team are now looking forward to a big rugby schedule for the rest of the year.

With a lot of new young faces in the Men’s team, Coats said of the winning team:

“It’s a fresh group of guys, but we’re all very keen to learn and we’re just trying to look at it as a growth mindset – just to keep building one day at a time – we’re really enjoying it.”

“It’s huge to qualify for the 2022 RWC Sevens – the best teams are going to be there,” she said. “And, to come together and have a big year with lots of rugby after COVID is everything we have ever wanted.”

Day 1 of the tournament saw a round robin style of play, whereby the Men’s teams were separated into first and second in each of the pools.

Highlights included the opening match of the Qualifiers where Jamaica defeated Curaçao, followed by a huge victory by Mexico against the Turks and Caicos 57-0.

Team Barbados had a convincing win against Belize, before facing Bermuda Rugby who avenged their bronze medal loss from last October by defeating them 24-10.

In the second part of the day, Curaçao Rugy scored a massive win as they defeated Guyana to book their spot in the Cup Quarter Finals, and Cayman Rugby also sailed through to the Quarter Finals after defeating Turks and Caicos 49-5.

The quarter final match ups brought hot competition with all teams bringing their ‘A-Game’ and keeping their eyes on the prize.

Canada was the first team to qualify for the semi-finals after defeating Barbados, despite incredible pace from BRFU’s Rueben Norville in scoring the first try of the match for Barbados.

Mexico defeated Curaçao in their Cup Quarter Final 27-7, followed by Bermuda’s close win against Trinidad and Tobago to also secure them a position in the semi-final.

Jamaica then narrowly defeated the Cayman Islands to fill out the final semi-final slot for the day.

Next up in the semi-finals, team Canada took out Mexico, while Jamaica defeated Bermuda, to secure both their places in the RAN Sevens Qualifiers Cup Final.

Rounding out an epic day of rugby, the 2022 Cup Championship saw Canada defeat Jamaica 29-12, however both teams will head to South Africa for the RWC Sevens and to England for the 2022 Commonwealth Games so it was a win-win for all, despite the scoreboard.

Day 1 for the Women’s teams was also in round robin style and began with Canada defeating Trinidad and Tobago in a massive victory 71-0.

In the second match of the Women’s competition, Mexico defeated the Cayman Islands in their first match of the day, while Jamaica went on to defeat Trinidad and Tobago.

Team Mexico then found themselves unable to score against Canada in the last game before the break.

When play resumed, Canada had a showstopping win against Jamaica 66-0, while Trinidad and Tobago defeated the Cayman Islands in the final Women’s game of Day 1.

Day 2 showcased more highlights for fans including a remarkable try in the opening match from Schmarrah McCarthy for Cayman Rugby, despite their defeat to Jamaica.

Canada was again unstoppable in their win against the Cayman Islands 71-0 to secure their place in the Cup Final, while team Mexico were just as determined to make it through, defeating Jamaica 38-5.

To round out the Women’s competition, Canada continued their winning streak in the Championship Final, beating Mexico 33-0 and advancing to the 2022 RWC Sevens in South Africa.