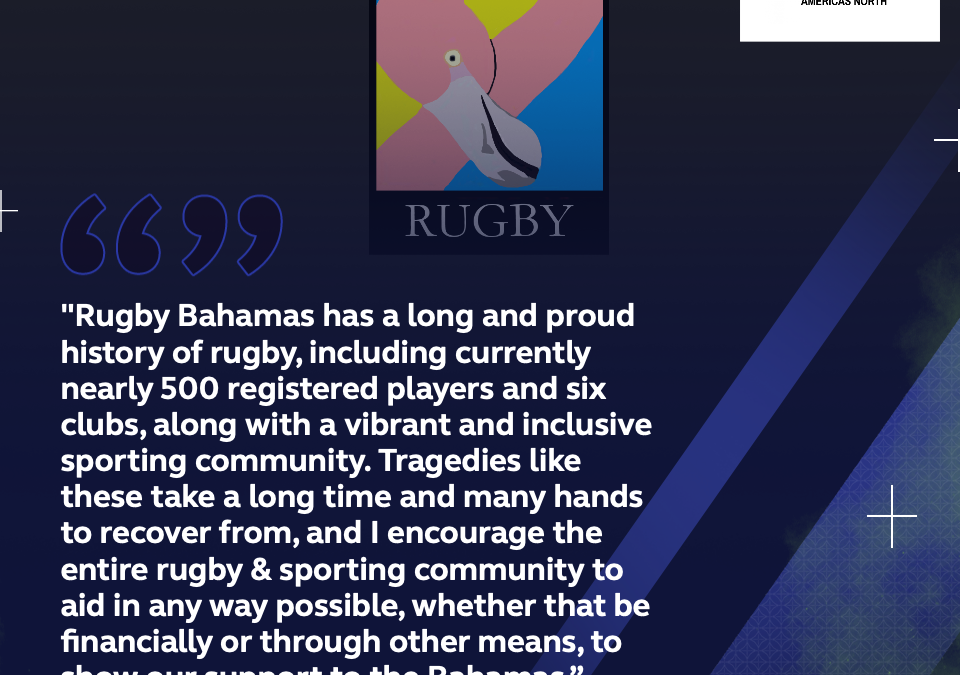 Rugby is a sport based on core values, respect and community. Whether it’s the Rugby World Cup final or a Sunday morning minies tournament, these values are instilled in all participants to ensure the game is played the way it has always been.

Kids are taught to support their teammates, respect officials and shake hands with their opponents. And, when tragedy strikes, the camaraderie and principles instilled at a young age shine through.

This week, Category 5 Hurricane Dorian has ravaged parts of the Bahamas, leaving thousands homeless and several people dead in what the country’s Prime Minister is calling one of the worst disasters to ever strike the Island nation. Destructive winds, torrential rains and flash flooding from the storm has estimated to have destroyed more than 10,000 homes and has wiped out much of the area’s infrastructure, especially in Freeport and the Abacos.

Aid experts say there are immediate emergency needs before the long, difficult task of rebuilding can begin.

Rugby Americas North is encouraging the entire rugby community to show their support by donating to a charity that can bring relief to the tens of thousands of people affected.

“Rugby Bahamas has a long and proud history of rugby, including nearly 500 registered players and six clubs, along with a vibrant and inclusive sporting community,” said Miguel Carner, President of Rugby Americas North.

“Tragedies like these take a long time and many hands to recover from, and I encourage the entire rugby & sporting community to aid in any way possible, whether that be financially or through other means, to show our support to the Bahamas,” added Carner.

100% of donations go to relief efforts.  No deductions for administration.
Highest ranking or 100/100 on charitynavigator.com
Accountability for every dollar given
International protocols for disaster relief combined with local knowledge to get aid where it is needed most
Rotary responds to disasters over the long-term with recovery and rebuilding efforts long after the initial relief aid has disappeared
Give Now> Special Instructions: Hurricane Dorian

Installed a mobile water plant in Grand Bahamas producing 6,000 gallons per day
Secured donation of 15,000 gallons of water (to be split between Abaco and GB)
Facilitated donation of $20,000 of fuel for the first relief boats to leave for Abaco
Collaborated with other local NGOs to stockpile supplies for shipment and evacuees
Give Now> Special Instructions: Hurricane Dorian

Rotary, NGO and corporate partners are building a camp with Shelterboxtents and infrastructure to immediately house 160 people as government shelters are insufficient
Support up to 700 evacuees per day with processing and additional temporary housing
Secure medium-term housing for up to 15,000 evacuees through private citizens, summer camps and hospitality partners in Nassau and the family islands
Give Now> Special Instructions: Hurricane Dorian