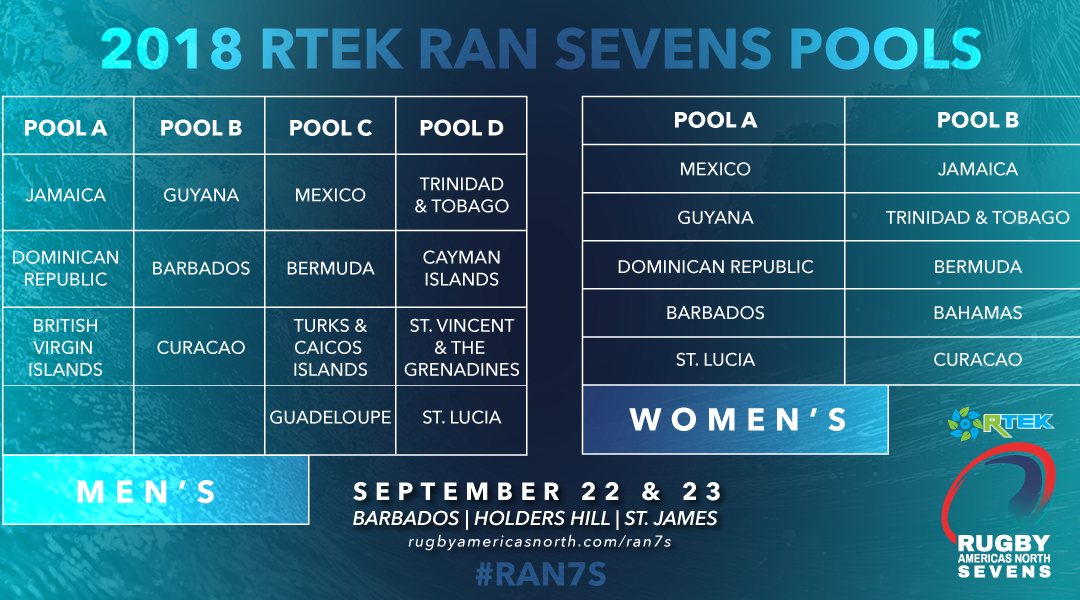 As the one-month-to-go mark nears, Rugby Americas North has announced today the pools for the 2018 RTEK RAN Sevens to take place in Barbados on September 22 and 23. Representing the region will be 24 teams from 15 countries. The 2018 RTEK RAN Sevens is a qualifier for the 2019 Pan American Games. RAN teams will also be looking ahead to the 2020 Olympic Games. The 2019 RAN Sevens will serve as the regional qualifier with seeding based on 2018 results.

In the women’s division, the number of participating teams has jumped from seven in 2017 to ten this year. The teams will compete in two pools before being seeded in the Cup, Plate and Trophy playoff divisions.

Trinidad & Tobago Women’s Head Coach Carlton Felix acknowledged the growth of women’s rugby in the region as shown by the increase in participating teams this year.

“I’m very happy with the number of teams we have this year in the tournament as it’s been a while since we’ve had so many,” said Felix. “As always I expect our match against Jamaica to be very tough as they’re one of our biggest rivals. Bahamas and Bermuda are expected to be physical and Curaçao is a bit of an unknown entity at this level so we’ll definitely be wary of them. I’m happy with the format and excited to see how things go.”

The number of men’s teams competing has also increased, from ten in 2017 to 14 this year.  Last year’s men’s final in Mexico City saw Guyana narrowly lose to Jamaica, which denied them a ticket to this year’s Rugby World Cup Sevens. Guyana will surely have something to prove as will Mexico, Jamaica, and Trinidad & Tobago–the second through fourth places finishers respectively in the recent Central American and Caribbean Games in Barranquilla, Colombia.

Congrats to all teams! pic.twitter.com/J8t3zeFVam

“On the heels of Rugby World Cup Sevens and the Central America and Caribbean Games, which saw a number of our unions compete, the 2018 RTEK RAN Sevens is gearing up to be one of the most competitive to date, with the added incentive of a place at the Pan Am Games for the winners,” said Niall Brooks, RAN General Manager. “RAN are looking forward to hosting the event at the prestigious Holders Hill Polo Grounds, an ideal venue to host RAN’s showpiece sevens tournament.”

Barbados rugby union will also be hosting a fundraiser on September 16 as a kickoff to the 2018 RAN Sevens competition. This year’s legacy event is the Ultimate Tag Rugby Showdown–Celebrity Edition. Four teams of local celebrities will compete over the course of the day to help bring awareness to rugby in Barbados, promote the upcoming international competition, and build relationships with GIR Barbados and local sponsors. GIR Barbados is partnering with Bajan Rugby Pride, BSL Athletics, and Holetown Chamber of Trade to put on the event. All money raised will fund GIR and women’s programs in the union.

“We are inviting everyone to come out and enjoy a fun, easy-to-play version of rugby in scenic Holetown,” said Kevin Myrell, National Director of GIR Barbados.  “We are grateful to have some of Barbados’ best celebrities participating and proving that rugby truly is a sport for everyone.”

All matches of the 2018 RAN Sevens tournament will be streamed live on RAN’s Youtube channel. Fans can also follow updates using the hashtag #RAN7s on Facebook and Twitter. The event page for the tournament can be found at www.rugbyamericasnorth.com/ran7s.

All teams will complete their Pool matches on Day 2. The top 2 teams in each pool will play 2 matches on Day 1 and remaining match on Day 2 i.e. against each other.

Trophy Competition:
5th Pool A v 5th Pool B – teams to decide on 1 match or 2