Phaidra Knight Presses for Progress: The Continued Brilliance of a Hall of Fame Inductee 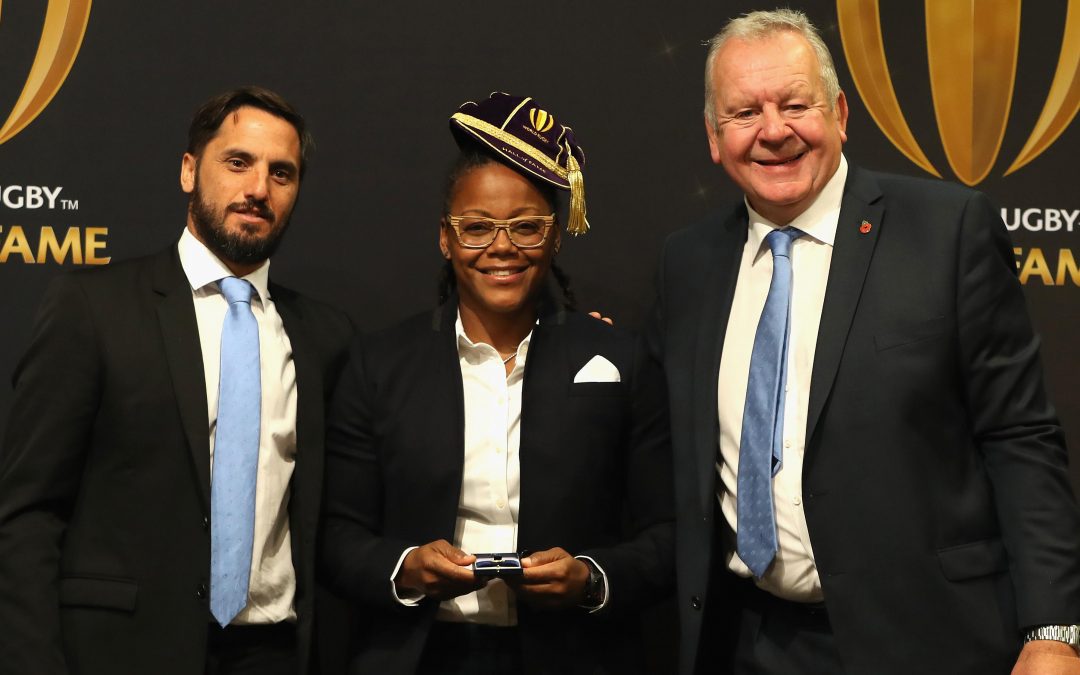 On November 10, 2017, Phaidra Knight became only the third North American female to be inducted into the prestigious society that boasts 147 inductions in twelve years. One American woman and one Canadian woman have received the same accolade, Patty Jervey and Heather Moyse, respectively. Around the globe, World Rugby has honored just nine women with the Hall of Fame title since its induction process began in 2006. The World Rugby Hall of Fame Induction is a special and well-deserved honor for these nine women. Across the world, the anticipation of more female inductees is strong. Knight’s story is one that highlights the power of women within the rugby community and beyond.

Knight is an 18 year player of the game with distinction in coaching, on-screen representation and national
governance. With three World Cup appearances, 2 acclaimed All World Team selections, 43 USA representations, and the designation of ‘Player of the Decade’, Knight holds a well endowed rugby resume. Her on-field laurels clearly advanced her into the Hall of Fame, but her off-field prowess continues to launch Knight into the rugby ethers of forever. As she steps off the field as a player, she steps behind the camera as an analyst set to grow the game through understanding, recognition and enthusiasm.

One of five legends inducted into the World Rugby Hall of Fame is North America’s very own Phaidra Knight.
Since her induction in 2017, Knight has chosen a path of televised rugby promotion, one that continues to
showcase both her talent and prestige for all the world to see. She builds on her rugby successes, advancing
the game of rugby on a stage under bright lights, close-up camera shots and celebrities of a different genre.
Young athletes, lifetime fans and newcomers to the sport all have the advantage of seeing rugby through the eyes of a master. We are graced to call Phaidra Knight our hometown hero and we are pleased to know that after her world class induction she moves forward in pursuit of rugby’s portrayal across the globe.

“There’s no better way to finish a career.”

Surreal is a descriptor often used to represent moments of unbelievable acclaim or stardom. Having been marked by the intense irrational reality of a dream is what details the fantastic experience of Hall of Fame induction for Knight. The first moment of shock came with the delivery of an email that would turn her rugby world in a new direction, steeped in responsibility and honor. The time between notification and ceremony provided a touch of understanding for what was to come by receiving an award of such high esteem.

“I don’t think words can really capture how I felt,” she says when describing the official night of commemoration. The ceremony itself was a wonderful experience imbued with countless rugby heroines and heroes from around the globe. Of particular note was Knight’s table-mate, Anna Richards, inducted with the
first class of female inductees in 2014. Richards is one whom Knight played against from the earliest days in
her rugby career and thus felt the immensely special moment gather around her as the night proceeded.
Enjoying this evening with special friends, Phaidra immersed herself in the night, finding moments of
connection with her fellow inductees, rugby historians, and the panel who selected her to her rightful position
as an official rugby star.

The end of her playing career is a reality Knight made her own in August of 2017 with the announcement of her retirement. She will no longer lace up her boots as a player, but the ongoing emotional awe of her Hall of Fame induction will remain a catalyst for furthering rugby in America and abroad. “With this award comes tremendous responsibility,” she notes. Responsibility that drives her in her current positions as USA Rugby Board Member and NBC On-Screen Analyst to continue to do more for the rugby community. “I need be able to help cultivate an environment and a culture in America where we can mold future World Rugby Hall of Famers.” This driving force remains prominent as Phaidra pursues a childhood dream of showcasing her talents on television. An unpassable opportunity in her eyes, working with NBC brings great opportunity to showcase rugby to wider audiences.

Joining forces with the likes of Patty Jervey, the United States’ first female inductee, and other notably prominent rugby names, Knight looks forward to growing the foundations of rugby success. As she moves forward in promoting the game of rugby, Knight seeks additional resources for individual athletes hoping to pursue rugby excellence. One such effort Knight has taken on is the development of a non-profit organization that focuses one avenue of its design on raising awareness of and connection between worldwide rugby organizations. The impact of working together will be much greater, in the eyes of this hall of famer, as rugby associations build stronger connections in their efforts to develop the game.

As Knight continues her involvement in rugby after her Hall of Fame induction, she holds roles both visually representative and demonstratively out of sight. Her NBC analysis role is the most perceptibly prominent with its on-screen notoriety. Behind the scenes in the media field, Knight works with publication outlets to expose rugby to new fans and players alike by sharing engaging rugby stories that boost connection and viewership. Some of such coverage occurs through Flo Rugby, an online rugby analysis platform, with interviews and articles submitted by Knight herself.

Knight continues to coach with Monroe College in Bronx, New York. This is one way, she emphasizes, to give back to the rugby community while continuing to open opportunities that can help bring other rugby players’ dreams to reality. Being an International Athlete Representative for the USA Rugby Board of Directors is a position that allows Knight to remain involved in the structuring of the organization’s governance over the next four to eight years. This role is one that requires a daily adherence to performing duties that ultimately supports individual rugby players taking part in the game. Additionally, Knight is a member of the World Rugby Judiciary Panel that hears cases involving cuationary moments of play throughout international matches. In this role, she bridges the gap between on-field play and governmental management.

“It’s really about the journey.”

Many rugby players seek fame, stardom, or an advanced rugby career. For those elite-minded athletes, and for those who wish to play under the radar, Knight offers advice in the form of her own lessons learned. Looking back on the trajectory of her own career, Knight recalls the moment she realized that her dream of becoming a world class athlete could become reality. She knew she had the dedication, the love, the passion for high-level play and recognition. Pouring endless amounts of positive energy, unwavering self-belief and physically demanding hard work proved the necessary elements of success. These are the components Knight believes brought her to the Hall of Fame and the same ones that will lead countless others to that same place if they so choose to strive for it.

An acknowledgement of individual women in the sport of rugby, most especially in America, is a need that has gone little celebrated for far too long. Every person who takes part in this sport, every woman who puts on the USA jersey to represent the masses, deserves outward recognition by all. Knight has her eyes set on acknowledging and celebrating all women who put on a representative jersey for their country. The Hall of Fame should not be the sole public occurance of recognition for the masses. Knight believes that women deserve public recognition for their contributions to rugby growth and success, beyond what the Hall of Fame offers to a distinct few, and strives to make this recognition a reality.

Our most recent North American Hall of Fame inductee shares with us her most sage advice. “Strive to be a good person, treat everyone with respect, give love to yourself. Put these components together and you are bound to find your true self. You will have a greater awareness of what you want in life and you will soon be led in the direction of your destiny.” Phaidra, 2017 World Rugby Hall of Fame Inductee, ends with these final words that speak some of her truest truth in rugby and in life, “It’s really about the journey. Enjoy everything that you do.”