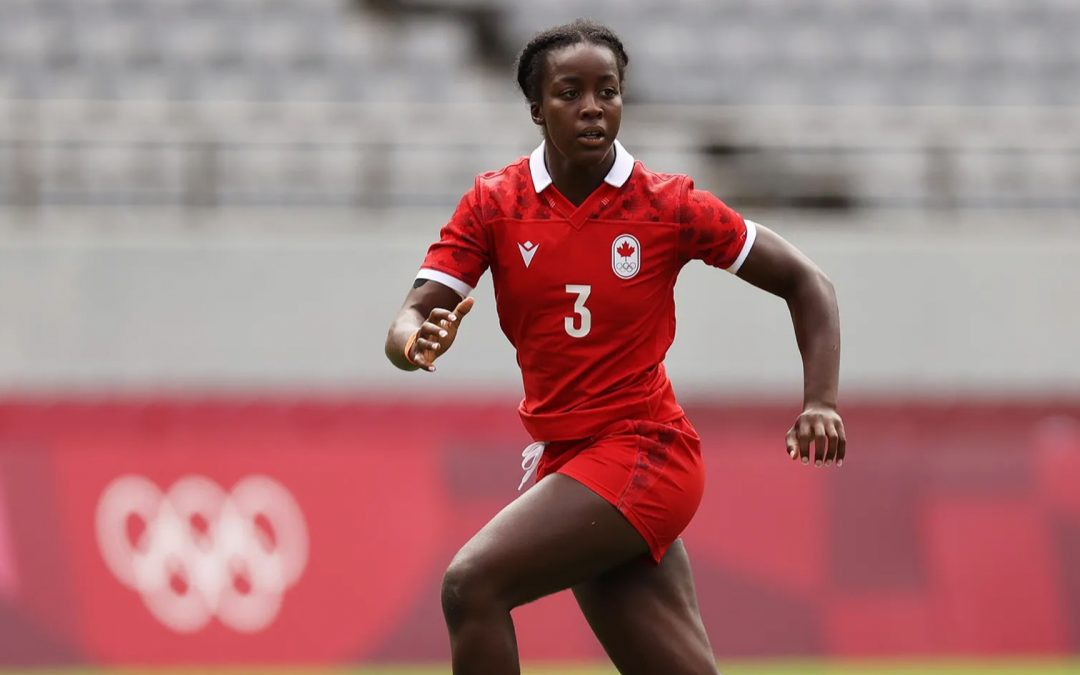 Pamphinette Buisa hopes that lessons learnt in 2021 can help drive her and Canada onto double Rugby World Cup success this year.

Buisa, who played her first test in four years last November having been part of the Canada squad that finished a disappointing ninth at the Tokyo Olympic Games, has set herself the target of competing at both RWC Sevens 2022 and RWC 2021 – and bringing home at least one medal.

Preparation, guided by international team-mate Karen Paquin, is already well underway and Buisa could take a sizeable step towards making it reality before the end of April.

Canada will compete in the Rugby Americas North (RAN) Sevens Qualifiers on 23-24 April, and hope to be able to celebrate their passage to Cape Town when they welcome the HSBC World Rugby Sevens Series to Langford a week later.

“My goal is to do both,” Buisa told World Rugby. “The fact that you can represent that jersey and show up at these major events is super exciting.

“My goal is to be at both, excel at both and to come back with hardware from both of them.

“I think there’s a couple of us who are doing it… a few other players are doing it and they’ve also played at the World Cup before.

“So, to have my first opportunity to now be an Olympian and hopefully also be at the World Cup is something that I hope to achieve.”

Paquin has been a particular support for Buisa during her career and has been on hand to impart advice about switching between sevens and 15s, having represented Canada at two Rugby World Cups, one RWC Sevens and two Olympic Games.

“Karen Paquin, who is so cool, is always telling me to sleep, your body needs to be recovered, and to make sure to prioritise my wellness,” Buisa said.

“It just shows how great a team-mate she is… if you’re down, you will hear her, and she’ll be there for you to guide you through.

“My entire career, I’ve always leaned on Karen to make sure that whenever there’s doubt or I don’t really know what’s going on or [I need] that confidence piece, seeing her lead by example is something that I admire a lot.”

Should Canada and Buisa make it to RWC Sevens 2022 as well as RWC 2021 then you can guarantee that her dad will be watching on “head to toe in Team Canada kit”.

Her parents are the reason why playing in Cape Town would be particularly special for the 25-year-old.

When Buisa’s mum and dad left the Democratic Republic of Congo they emigrated first to Johannesburg, in South Africa, before moving to Canada. It is there that they first witnessed the transformative impact sport, and rugby, could have.

“My first ever tournament in Africa was the Cape Town tournament,” Buisa said. “I remember getting off the plane and there was music, and people cheering.

“Personally, I just felt like I was home in a way because being Congolese and the immigration story that my parents had to make their way here in Canada, that was really a beautiful moment.

“And so then playing and just seeing the crowd and seeing the culture and also people knowing the sport of rugby was so amazing.”

She added: “I think a thing that allowed my dad to be OK with me [playing rugby] was seeing how uniting the sport was and how it’s created so much social change that has helped unify so many people.”

SHOWING THE WORLD THEIR HOME

At the end of April, Buisa and her Canada team-mates will have the opportunity to play a home Series event in front of fans in Langford for the first time in almost three years.

It was at Westhills Stadium that Buisa made her Series debut back in 2018, and she cannot wait to return in a few weeks’ time.

“The crowd there is going to be so awesome, to have it show up once again. And I think it’s a long time overdue for us to have a tournament back again,” she said.

“I’m super excited. Canada Sevens is always super exciting because I have friends and family in the crowd and the ambience is amazing and also, it’s where we train every day.

“And just to share that moment with not just our team, but all the other teams and the crowd as well, it’s going to be awesome to come back again and show the world our home.”

As the hosts aim to finish the Series on a high and build towards the Commonwealth Games and RWC Sevens, it is also a chance for Buisa and her team-mates to show everyone they are on the right track.

“Every single tournament, every single game, is momentum to those big moments,” Buisa said. “Every opposition that we have is an opportunity to keep and gain momentum.

“What we’re looking to do is not only develop per game, but also think about longevity. For those big moments, like the Commonwealth Games, for [Paris] 2024 and for the World Cup.

“As well as making sure that we take every single game as an opportunity to grow, to learn and to show Canadian sport.”