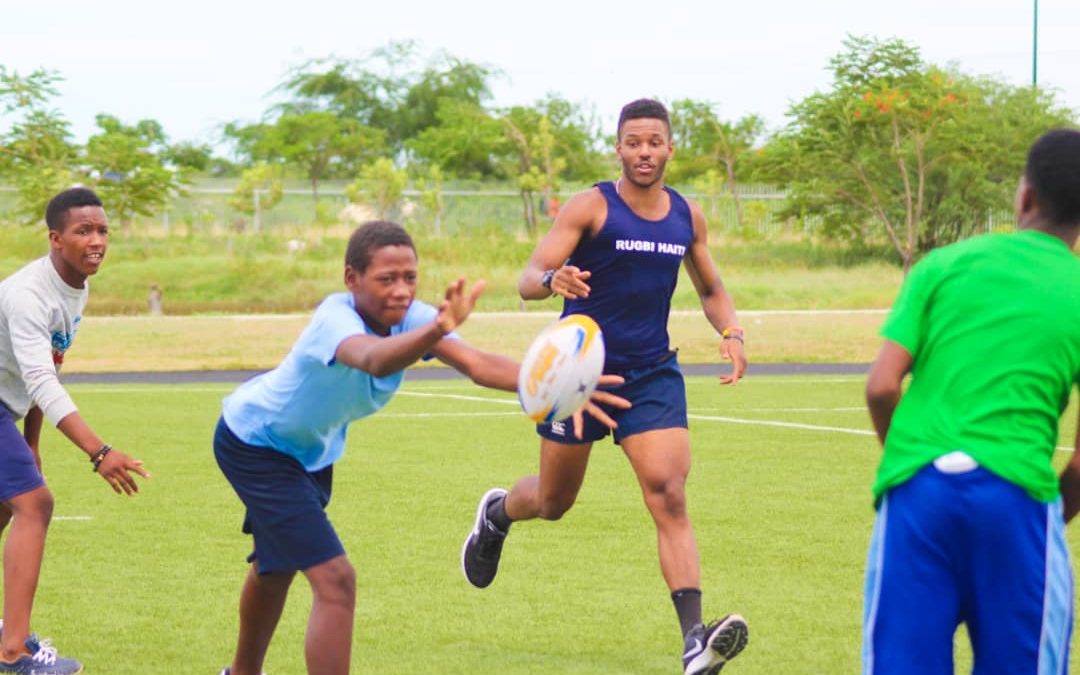 If you, your parents or your grandparents were born in Haiti and you are a high level athlete or rugby players – and you’re interested in representing Haiti in international competition – please email Eric Wilson at eric@ofoundation.org

As the globalization of rugby continues to flourish, a Boston-based charitable organization has taken the reigns on establishing high performance rugby in Haiti.

While the country’s domestic rugby scene remains at a grassroots level, Eric Wilson, Director of the OFoundation, is hoping to show the nation just how accessible the sport can be by founding both a Men’s and Women’s Nation Rugby Sevens teams.

Through fitness combines held both in the US and at the Haitian Olympic Training Center, as well as outreach directly on the ground, the 100 percent volunteer-led organization is helping rugby take root in the country with their sights set on recruiting enthusiastic players and the next pool of talent.

RAN: What is the OFoundation and its efforts/involvement in Haiti?

The OFoundation is a Boston-based organization that was founded in 2020. Our mission is to provide opportunities through sport, the arts and education. I started working in Haiti through my affiliation with basketball about four or five years ago, and there didn’t seem to be any form of rugby at all. However, I knew there was lots of rugby in the Caribbean. I figured we could integrate a national team to the Island by collecting donations to fund the Men’s and Women’s National Sevens Teams.

RAN: What progress has been made so far?

We are beyond excited about the progress that’s been made thus far. I didn’t realize how many Haitians were playing rugby in America who qualify. We’re recruiting for the national side through fitness combines. We recently held one in Boston with 15 participants, and we have another one planned in New York. We’re also hoping to hold a camp in August in Haiti where we’ll bring in some all-star coaches as well as elite players from the US. We’re not trying to create a team of foreign nationals to represent Haiti. In fact, it’s my deep desire, that by our first international game that we’ll have at least one or two native Haitians on the team.

RAN: What is the landscape of sport in Haiti, and how much rugby is currently being played?

There isn’t a lot of rugby in Haiti at the moment. The country’s main sports are soccer and basketball. Currently, basketball is growing like crazy, but I see this as an opportunity because there are many athletes who aren’t going to make it in either sport so that’s a big part of that population who could get involved with Rugby Sevens.

RAN: Tell us about the fundraiser?

The OFoundation is fundraising via a $10 monthly donation called an opportunity investment. Essentially, it’s a recurring fee that hits your debit card every month with a $120 tax deductible donation to the OFoundation which is a 501(c)3 non-profit organization. Our goal is 200 individual donations which would amount to $2,000 recurring donations every month. The donations will help cover the cost of coaches, kit, tournaments, balls/apparel, food, hydration and transportation. This funding is critical to the continued support and success of these programs.

RAN: Why should people support the OFoundation?

The OFoundation is 100 percent volunteer run. The other critical part of what we are doing is ensuring women are involved which is vital in a country like Haiti where physicality and sport for women aren’t promoted. Although it will be a huge challenge, we hope to change that perception on the Island.

RAN: What can the sport of rugby bring to Haiti?

As rugby players, we know the five core values of the sport and how unique the culture is compared to any other sport. We’re really trying to show to the Haitian population that this sport is different. I personally grew up having access to every sport imaginable. I played cricket at camp, volleyball and tennis. I played on so many different teams but then I found rugby and I dropped everything else!

To learn more about the OFoundation, or to make a donation, please click here