The New Olympic Dream: An Olympian & An Officiate Press for Progress 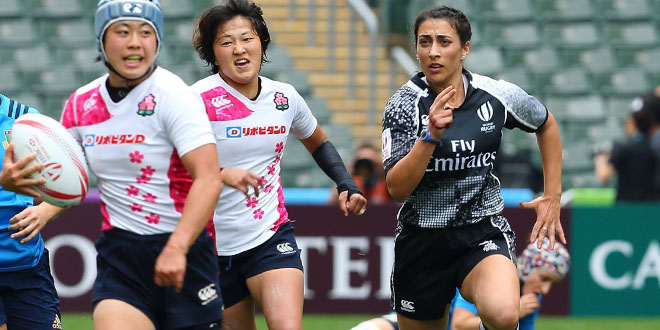 The intricacies of rugby have required referees of the highest caliber since the sport’s inception in the 1800s. In this pool of high quality referees the vast majority have been men. Two female referees, Rose LaBreche and Jillion Potter, offer unique perspectives that highlight the importance a referee holds to the game and the progress being made within the sport.

At the 2016 Olympic Games, the ​Olympic Panel​ of Referees hosted 28 referees, 10 of which were female (36%). ​USA Rugby’s National Panel of Referees​ currently awards distinction at this level to 15 referees, 2 of which are female (13%). Gender disparity within the rugby community of officiates is not unique to the sport. And the dominant number of men does nothing to lessen the power of females who officiate the greatest of rugby matches on the grandest of stages.

Athletes of a New Breed

Rose LaBreche began her rugby career as a high school athlete at Markham District High School in Markham, Ontario. Decades later she became the first and only referee to represent Canada and the whole of North America at the 2016 Olympic Games in Rio de Janeiro, Brazil. Becoming a referee who would command the grandest of sports stages may not have been LaBreche’s initial rugby dream, but the reality of her achievements has been an electrifying inspiration the world over.

In 2008, LaBreche took part in her first referee certification course. As she continued to play the game, she began to learn skills that would help her future referee career. As a utility back line player, LaBreche learned skills on the field that would later transfer to her refereeing cache of knowledge. Having played for a total of ten years, LaBreche saw great success and opportunity as a rugby athlete. Quickly captivated by the sport, she climbed her way up a ladder of rugby success. LaBreche earned a spot on the Queen’s University Varsity squad. Beyond her university prowess, she gained recognition when named to both club and provincial Canadian teams.

As rugby sevens builds momentum, aided by its instillment in the Olympic Games, refereeing has become more of a sport unto itself. Refereeing is an option for all: those who have loved the game from the sidelines, athletes new to the sport altogether, and rugby players looking for a new way to engage with the sport at a high level. This last aspect points to athletes of a new breed, striving to make waves within the rugby community and to earn the Olympic honor of officiating world champions.

A Unique Pathway Onto the Olympic Stage

Jillion Potter, a 2016 Olympian, steps onto a self-created pathway towards the 2020 Olympics. Much like LaBreche, Jillion looks to add Olympic Panel Referee to her reportage and officiate the greatest of rugby athletes in competition for gold. Jillion graced the stage of the Rio Olympics as a member of Team USA Women’s Rugby 7s and now looks to do the same while holding an official’s whistle.

In 2015, less than one year before the Olympics were set to begin, LaBreche was shown a video that told the beginning of her Olympic story. She had been selected, along with many of her fellow referee colleagues, to take her whistle to Rio. “I was pretty emotional when I realized the gravity of the situation!” LaBreche, a referee appointed to her first World Rugby match that same year, would represent Canada at the 2016 Olympic Games.

Refereeing offers a unique pathway onto the Olympic stage. ​Canada’s current referee pathway​ is outlined carefully, leading referees to new levels as they master skills and systems of the game. Before Canada’s pathway was so diligently defined, many referees created their own steps to rise in the ranks. On LaBreche’s journey, she had been appointed to the national panel before she was appointed to the provincial panel, something that is unlikely to happen in Canada today. Even with the newly defined structures of Canada’s rugby pathway, referees with connections in other countries may gain appointment to matches abroad without having been selected to the ​World Rugby​ panel of referees.

2017 saw the first official ​USA Rugby High-Performance Rugby Sevens Referee Pathway​. The pathway was designed to support referees interested in pursuing World Rugby panel nominations and potentially an Olympic Panel appointment. This pathway continues into 2018 for USA Rugby, yet Potter has found that developing the start of her own pathway is in her best interest. Potter will likely aim for USA Rugby’s pathway in pursuit of her ultimate goal, but states, “I don’t believe in other people’s timelines. If that were true I would’ve never made the Olympics.” And so she embarks on a journey with a prize in mind.

“When I first started refereeing I didn’t recognize the heights refereeing could take me.”

Potter has found that American referees, much like players in pursuit of national recognition, must advocate for themselves a great deal along the way. Potter, quite notably, built a small rugby tournament in Denver in order to ramp up her own experience. She reached out to club teams, set up a round-robin day of rugby 7s, hired an athletic trainer, rented a field and refereed the matches. It is possible that this level of self-created experience may not be necessary, but Potter believes it a requirement in order to expand her possibility of reaching the Olympics in just two years time.

“When I first started refereeing I didn’t recognize the heights refereeing could take me,” says LaBreche. Stepping onto a world-renowned stage is no easy task. LaBreche faced her own demands of balancing a career with refereeing and everyday life. Referees seek support from those around them as they venture out onto these paths that require juggling. This has been true for LaBreche and will be true for Potter.

For LaBreche, having a High Performance manager to support her along the way has made her goals more attainable and her path less daunting. Her manager has supported her referee appointments both abroad and at home, while building assessment and scouting opportunities that allow her to build her rugby resume and gain a bit of spotlight.

Potter is a ​Rocky Mountain Rugby Referee​, an organization that connects referees with local matches and a potential pathway to the USA National Referee Panel. Marc Nelson, former USA Rugby referee and Referee Development Manager, works with Potter as her referee mentor. Nelson assesses, critiques and corrects Potter’s refereeing skills while also teaching her rugby law comprehension and effective uses of verbal and whistle communication on the field.

Having a mentor is not a requirement under USA or Canada Rugby’s referee rules prior to becoming a national panel referee; however, LaBreche and Potter have both found that having such a guiding hand is a monumental support. These mentors bring invaluable learnings for referees whether new to the scene or working at the Olympic level.

Looking back on her time as a player, LaBreche notes that she paid little attention to the rules of the game back then. This is a common realization of many rugby players seeking to referee. Playing does, however, offer a unique awareness of the game that adds to the depth of knowledge a referee holds. For Potter, her depth of referee understanding was limited as a player as well. She understood that refereeing was complex, an understatement of course. The challenge of game and player management was something Potter would not fully comprehend until she held her own whistle.

Those who play rugby know that the game is best, and most fully enjoyed, when having fun. No matter the level, our expectation is to have an enjoyable experience on the field. The same is true of a referee. At least in the sense that referees desire to preserve this element, adding a necessary layer of fairness to joy.

While Potter’s refereeing journey takes a considerable amping up, LaBreche holds steady in 2018. Potter had her first notably prominent referee appointment for the North American Regional Qualifiers of the the Youth Olympic Games. This Las Vegas appointment is the start of a prominent lineup of matches in an eventful season of refereeing for Potter. Her handmade schedule has her traveling across the country to referee for college matches and club team scrimmages. LaBreche recently refereed at the Women’s Six Nations tournament and will continue to referee the ​HSBC Sevens World Series for Women​.

“As a player you think it’s easy to be the ref. It’s not,” Potter states while urging players to take part. Referees, she continues, have similar training opportunities as players of the game. They learn varying perspectives to see rugby played and have a strong physical challenge in keeping in front of the momentum of any match. Refereeing was originally appealing to Potter because she wasn’t quite ready to leave her physical performance standards behind after the 2016 Olympics. Potter believes that more players should pursue refereeing as they have a strong base for understanding the game and it offers an opportunity to give back to a beloved sport.

LaBreche notes that referees can be utilized on a local level to support teams by refereeing intrasquad scrimmages, running drills and presenting law learning sessions for players. Developing a relationship between coach and referee only enhances the game and the opportunities for all to advance.

Representing Canada at the 2016 Olympic Games was a huge honor for LaBreche. Stepping into the electric environment of this multi-sport event was unlike any other tournament. With athletes and officials from 28 sports, the atmosphere pervaded that of the rugby community on its own. LaBreche points to the exposure of rugby around the world, its viewership boosting far beyond expectation, as one reason the Olympic Games offers a new and unique boost for the sport.

For those seeking to raise in the refereeing ranks, LaBreche offers a few words of advice. “Persevere…an adaptable mindset and positivity can take you extremely far!” Naturally there are hardships along the way to the glory of an Olympic appointment. With the support of mentors and managers, players of the game and coaches, our next North American Olympic Panel Referee is striving for appointment and hoping to add another woman to the progressing percentages.