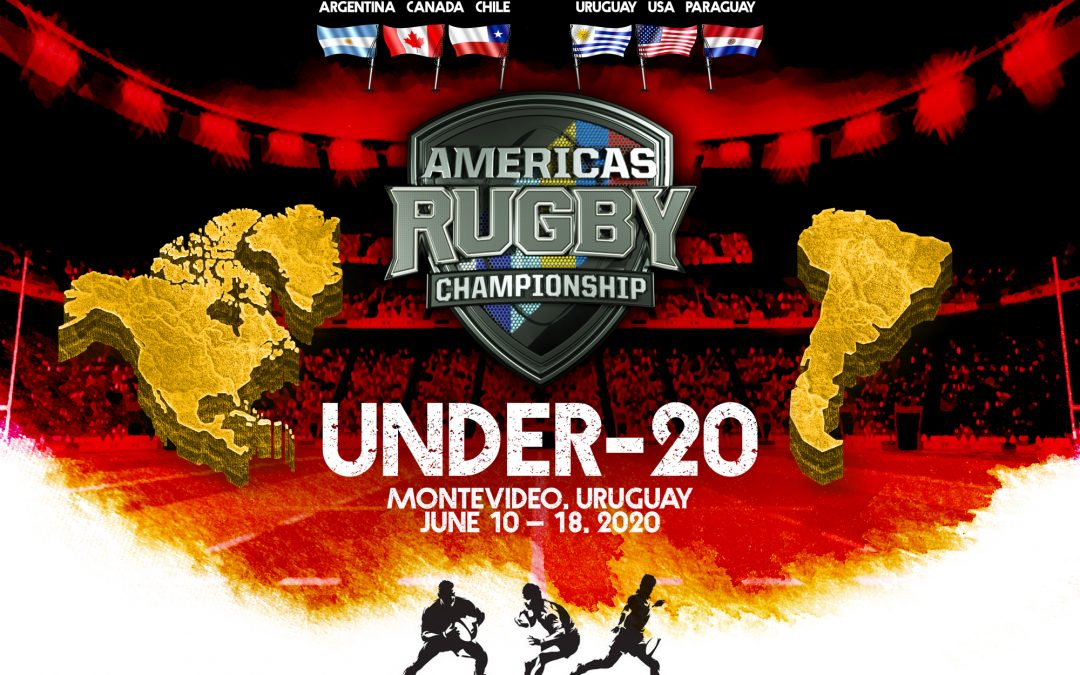 MONTEVIDEO, URUGUAY (January 30, 2020) – Today, Rugby Americas, along with Sudamérica Rugby and the Uruguay Rugby Union announced that the inaugural Under-20 Men’s Americas Rugby Championship is set to take place June 10th to 18th at Estadio Charrúa in Montevideo.

The tournament comprises of six nations: Argentina, Uruguay, Chile and Paraguay – who qualified through the recent Under-19 tournament in Uruguay – representing Sudamérica Rugby along with Canada and USA from Rugby Americas North.

Furthermore, North American rivals Canada and USA will have additional motivation at the tournament as their opening match will act as a one game playoff to decide who will compete at the 2020 World Rugby U20 Trophy in Spain in September.

In recent years the two sides have competed in a two-match series, however this year it’s winner-takes-all. The winning nation will join Uruguay as participants from the Americas; Argentina will once again compete at the World Rugby U20 Championship in Italy this June.

The U-20 ARC competition features three triple-header game days, with teams earning four points for a win, two for a draw and a potential for two bonus points by scoring four or more tries or losing by seven points or less. The team with the most tournament points through three rounds will be crowned the winner.

Number one ranked Argentina lead Pool A, alongside Canada (3) and Chile (5), while the hosts Uruguay (2) sit atop Pool B with USA (4) and Paraguay (6).

The senior Americas Rugby Championship, which features national teams of Canada, USA, Uruguay, Brazil and Chile, along with Argentina “XV”, was created in 2016 as an opportunity to provide the Americas countries with an annual high-level competition to further development.

The competition, which is entering its fifth year in 2020 when it kicks off in August, has proved invaluable for reaching new audiences across owned and earned media channels and provided significant test match opportunities for Canada, USA, Uruguay and Argentina ahead of the 2019 Rugby World Cup in Japan. Argentina XV and USA have each lifted the Championship trophy on two occasions.

It’s a busy year for rugby throughout the Americas, with the third season of Major League Rugby getting underway in less than 10 days, and the inaugural season of the Súperliga Americana de Rugby kicks off on March 4th, boosting professional competition across South America.

“For a few years we have been working together with Rugby Americas. In both the north and the south of the continent, we are aligned with our goals and opportunities. We have to fight so that our players find in their unions the possibility of developing and being successful in their future. We still have many challenges together and we are united as a continent to go after them.”

“Canada and USA are two countries we consider friends, with multiple ties. To continue the growth of Americas as a strong continent, with opportunities, is a very important for our unions.The Americas Rugby Championship was very successful in the initial four years; to extend that to the U20s is a huge step for all involved, ensuring continued growth.

“To be able to offer our young players a high performance competition is crucial on the road to elite rugby, the national teams and professional rugby. The ARC U20 comes at the right time for individual growth in HP, ensuring the game will grow from North to South.”

“For Uruguay, it is a great honor to receive the first Americas Rugby Championship U20. Not only because it will remain in history for being the first and having the possibility of being the host country, but because it confirms once again the confidence of World Rugby, and in this case Rugby Americas, in our country as an organizer of major events.

“The arrival of the Americas Rugby Championship U20 means a quality leap for the selected youth in terms of annual competition and will undoubtedly be a determining factor to continue developing more and better players.”

“We’re excited to launch the first-ever Under-20 Men’s Americas Rugby Championship in Montevideo, Uruguay. There’s been a lot of hard work over the last two years to make this tournament happen and we’re thankful for Uruguay Rugby leading as hosts.

“With all four of our key competitions – the Senior and Under-20 ARC and ARCh – linked through promotion and relegation, there is a competitive pathway across both North and South America that will fuel continued development.”

Kick off times and live stream information will be announced closer to the tournament. Follow Americas Rugby Championship, Sudamérica Rugby and Rugby Americas North on social media for further updates.

The next tier of competition, the Americas Rugby Challenge, was also created in 2018 and has seen the likes of Colombia, Paraguay, Mexico, Guyana and Cayman Islands compete in two round-robin style competitions as a way to underpin the growth in the region, along with the Under-20 version as well. In 2020, the Under-20 edition of the Americas Rugby Championship will be held in Montevideo, Uruguay to further support growth throughout the region.