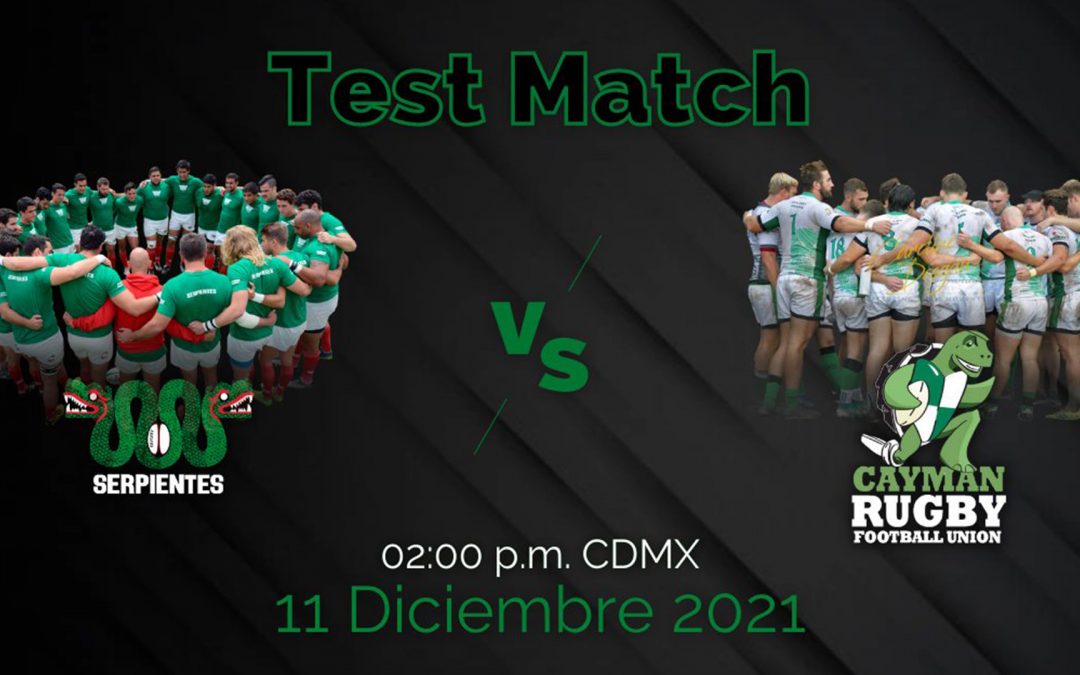 This Saturday’s test match between Las Serpientes of Mexico and the Cayman Islands is the return to rugby that Rugby Americas North has been waiting for. The match will take place in Mexico City and both teams are keen to get back to international competition and developing rugby in their respective nations.

A Long Layoff: Some Negatives, Some Positives

The majority of national 15’s teams in the RAN region have not played due to the global Covid-19 pandemic and this game marks a great return to international competition that is key to developing rugby in the region. Both coaches have teams chomping at the bit to play and see some good and some bad in the long wait.

Cayman Islands Head Coach JOVAN BOWLES is optimistic that a chance for players to rest, for other players to qualify, and for new players to get up to speed will be a good thing for long-term development, but this game could not come soon enough. With the team set to cap as many as 18 new players this weekend, he says, “It is great to have eligible players on the island and helps deepen the squad. We are small in size and having a boost with these playing numbers will help going into the next cycle.”

RUBEN DUQUE, Head Coach of Mexico, the layoff presented ample challenges but they met that with innovation. Just prior to the shutdown, the Mexico Rugby Union had identified five High Performance Centers around the country and players that would operate through each in their development pathway. They developed virtual sessions for players in each of these centers to address game and national team systems understanding, nutrition, planning, and strength and conditioning. The players took personal initiative during the layoff and while they were not able to train and play together, gains were made by the individuals.

Looking to the Future: Players to Watch

For the Cayman Islands, Coach Bowles is excited about both returning players and some new players that have come through the age grade system that can finally get their first taste of international competition. Veteran Second Row MARK SOTO, who may play as a loose forward, will take the field with DYLAN BOSTOCK, a top prospect that came up through the Cayman age grades and brings experience from University in the USA. Bowles sees Soto’s experience as key while the hard charging Bostock will add go-forward for the squad.

RANDY HENDERSON, a Scottish born back rower that is now Cayman-qualified and will bring his intense work-rate to the international arena. In the outside backs, Coach Bowles is looking to MIKEY WILSON to get the outside backs moving and rein in the Mexico attack. Forwards Coach YOHAN REGNARD is excited about the squad, saying “This team is an exciting blend of experience and new talent which will provide a strong foundation for the Cayman Men’s National XV going forward, starting with this fixture against Mexico. I have every confidence that the team will grow from strength to strength in taking Cayman men’s rugby to new heights.”

Coach Duque is excited to see his charges return to action and highlights several new and experienced players MIZAEL “MANITAS” LOREDO is an experienced hooker that has not missed an international match since 2013 has taken the layoff to get himself in tremendous physical condition and brings a battering running style and deft hands to the team. Team Captain MAXIMILIANO (Max) DOUEK is the oldest squad member and the Argentinian born forward bring intelligence and leadership that will be key for new caps to transition into the international arena.

Mexico center FRANCO GUERRERO has gained recent high-level experience in four 7s events including Olympic Repechage and the World Rugby Sevens World Series, and his decision making in the midfield will be as important as his acceleration and slick handling. Mexico will rely on scrumhalf ANDRES RODRIGUEZ to keep the game flowing and fast as the former age grade international continues his hold on the critical distributor role. Outside of Guerrero, Coach Duque is eager to see finisher FHARID SAMANO put his pace to the test against the Cayman Islands.

There are fifteen uncapped players in the wider Mexico squad, and although several have played for Las Serpientes 7s, Coach Duque is excited to see the new-look team perform on the 15s field. Among them are flanker NICOLAS FALCON who Coach Duque believes will grow into a valued member of the 15s squad and has proven himself in the shorter code.

Coach Duque summed up the squad with an appeal, saying “We want that our Mexican Rugby Community feels proud of our Serpientes. Not only for the playing style that we can develop, but also because of the way we do things from the total commitment and deliver”

For the Cayman Islands, all credit is given to the players. Says Coach Bowles, “As a coach, I am particularly excited for the players, most of whom are taking their first step into international rugby. This is a threshold fixture for the Cayman Islands, with a chance to re-enter the international stage with a crop of new players and dedicated leaders”.

Coach Bowles expects a big challenge from Mexico, and he and his staff know that their players will be in the right frame of mind to put out their best. Backs Coach ED GOUGH said “It is an exciting time for the Cayman Islands Rugby team and we’re really looking to the challenge against Mexico this weekend. We have trained hard, and we’re happy with where the group is at both physically and mentally. There is no doubt that this is a huge challenge but we’re up for it and looking forward to going out there and expressing ourselves.”

Coach Duque has insisted that the team concentrate on themselves during this match and look to perfect the fundamentals and execute a game plan that some players will not have played in the pressure cauldron that is international rugby. Players are expected to express themselves by adapting to each other throughout the game and by showing their capabilities within a system designed around decision making acumen. To quote Coach Duque, “We’re placing the focus on us. That’s the key, even more after 29 months without competition – to demand and challenge ourselves focusing on the process to get the best result possible”

Peering Across The Pitch: Sizing Up The Opponents

Coach Bowles knows Mexico well and is expecting a hard team that fronts up and is best when they play with momentum. He is sure of a strong set piece scrum and territorial kicking will be a part of Las Serpientes approach.  He expects that some game aspects must have changed for them over the past two years and has faith in his players to adjust on the fly. For him, the team that can better dictate defense and attack will have the better day and plans for that to be the Cayman Islands.

The Mexican team, while working to concentrate on their own game, knows that Cayman Islands will play with physicality and intelligent decision making. The biggest challenge for Mexico will be the unknowns. Coach Duque is aware that Cayman Islands has a lot new and talented players that they have not seen, so his team needs to be able to adjust to what is thrown at them. There is good rugby nous in the Cayman Island squad, and Coach Duque needs his players to play the chess match as well as the physical battle.

Coach Duque noted, “Cayman Islands will be a beautiful challenge since it’ll demand the best of each one of us to work collectively during the match. I think none of us know where we are at our individual and collective limits. These 80 minutes will be a wonderful discovery process.”

The match will take place this Saturday, and the game will be streamed through the Rugby Americas North site. Details are as follows: