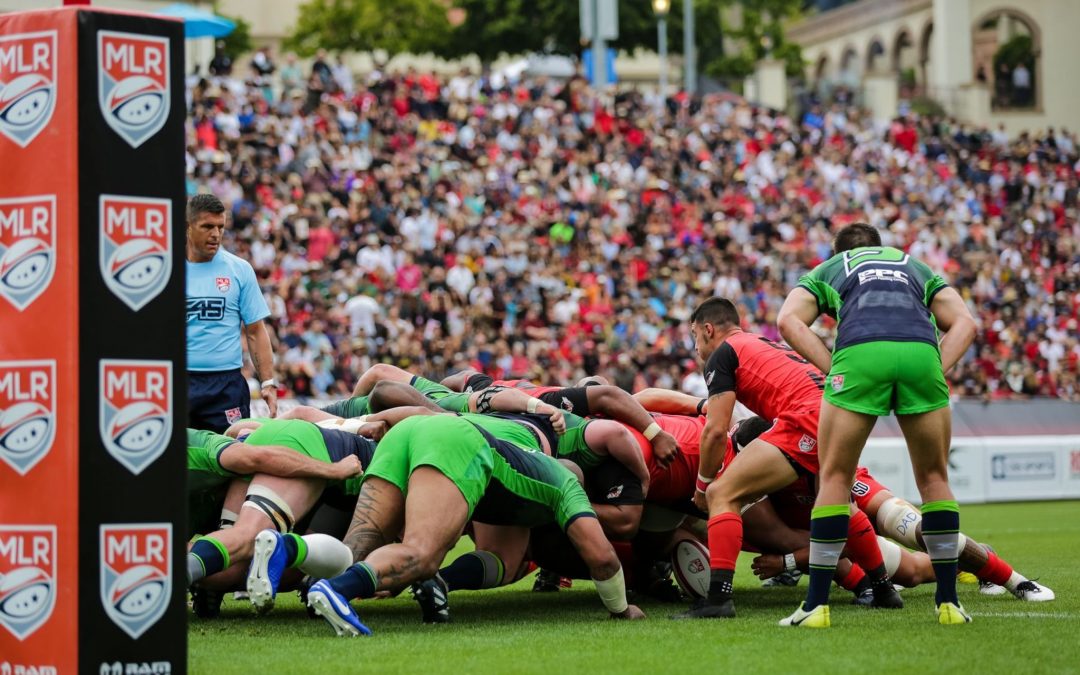 From a roster of seven teams in its inaugural year in 2018, the competition has grown to 12, and now spans the border between the USA and Canada.

The addition of a second Californian team, LA Giltinis, enables the competition to be split evenly into two Conferences of six teams, with the winner of the Eastern and Western Conferences playing off against each other for the title, last won by Seattle Seawolves in 2019.

Some of the most recognisable names in world rugby have already played Major League Rugby in its short history, such as Rugby World Cup-winning duo Ma’a Nonu and Tendai Mtawarira, and France centre Mathieu Bastareaud. The combination of overseas players and home-grown talent has made for an exciting mix.

Former US Sevens star and current MLR commentator, Dallen Stanford, who has been involved in calling games since its inception, cannot wait to see how the season unfolds after the global coronavirus pandemic saw the 2020 campaign cancelled after just five rounds.

“I’m thrilled to see Season Four set to kick-off after a full year without rugby in America,” said Stanford.

“The development of the game in North America has accelerated tremendously with the establishment of Major League Rugby, and in the next few years we will see the positive effects on the national team, who are aiming to reach the Rugby World Cup knockout rounds for the first time in history.”

“I am very excited to see what the expansion team brings to the League,” he added.

“I know Los Angeles is looking to make a massive splash with an exceptional squad recently assembled.

“This year if all goes according to plan, we will see the champion of both Conferences face off for the first time in the MLR final on 1 August, on CBS primetime television. It will truly be East versus West coast.”

Initially called Austin Elite, and then Austin Herd, the club changed its name to Austin Gilgronis. It is inspired by owner Adam Gilchrist’s love of a Negroni, an alcoholic drink, and a Texas-sized cocktail yet to be released!

Their Cowboy-wearing fans love a party, but they have not had much on-field success to celebrate. After finishing fifth out of seven teams in 2018, they propped up the standings in 2019 and were 11th out of 12 in 2020 when the season was brought to a halt.

After consecutive seventh-place finishes in the first two years of the MLR, the SaberCats were bottom of the overall standings with only one win to their name in the curtailed 2020 season.

The SaberCats boast Major League Rugby’s all-time leading scorer, Sam Windsor, and his partnership with De Wet Roos will be key to their prospects. After strengthening their squad, in terms of depth and ability, the SaberCats will be looking to kick on in 2021.

2019 Finishing Position: 7th/9
Home Ground: AVEVA Stadium (3,200 all-seated)
Team Colours: Black and Yellow
Head Coach: Paul Healy
Major 2021 signings: Centre/winger Veramu Dikidikitali’s ball-carrying skills and finishing ability made him a mainstay for the Fiji Warriors since 2018, while Zebre winger Paula Balekana will be looking to get amongst the tries again after a lean spell with the Italian strugglers. Both have the capacity to deliver the x-factor the SaberCats need.
Main rivals: The AGs

Californian rugby fans will be raising a glass to welcome the Giltinis, the League’s newcomers who are named after a Martini-based premium cocktail.

Built around multiple trophy-winning Wallaby forward Dave Dennis, the Giltinis have assembled an impressive roster for their debut season in MLR and should hit the ground running. Ex-England prop Alex Corbisiero joins the coaching staff.

The plan is to play home games out of the Los Angeles Memorial Coliseum, where the Trojans US Football team play. With a capacity of 70,000, they are thinking big!

As the only unbeaten team after five rounds in 2020, the Legion were looking in good shape to go one better than the previous year when beaten to the MLR Shield in heart-breaking fashion by the Seattle Seawolves.

The pain of losing in the last minute, 26-23, is still keenly felt amongst Legionnaires – the name of the club’s fans – and they’ll be hoping the addition of Chris Robshaw and the input of current England head coach, Eddie Jones, who has been helping out on a consultancy basis, will tip the balance their way.

Ma’a Nonu has left for France but Cecil Afrika, the Blitzbok Sevens star, is another exciting new signing.

The dominant force in Major League Rugby, with back-to-back titles in 2018 and 2019. But the Seawolves were struggling in a lowly 10th position when the 2020 season was cut short as a new-look squad took time to bed in. The need for stability this year perhaps best explains their low-level recruitment during the current off-season.

Winger Brock Staller is still their go-to player. The Canadian with a massive boot scored the first try in Seawolves history and was top point-scorer in the last Shield-winning campaign in 2019.

Seawolves fans are among the best in the business. The Starfire Stadium has been filled a number of times and an army of fans regularly travel to away matches to give their vocal backing.

Warriors reached the semi-finals in the first MLR season, but they have a record of just four wins from 21 matches across the last two campaigns. Pittman has vowed to shore up a porous defence and make them more difficult to beat.

As for their fans, the Warriors still hold the highest single-match attendance record of 9,186, which was set in 2018 during their first-ever home match. With the Warriors capturing the imagination of the local public, despite the disappointing results, plans for a new 10,000-capacity stadium have been submitted.

The Free Jacks have not played a home match yet in MLR as the coronavirus pandemic struck just before they were due to host the SaberCats in Weymouth, so fans from the nearby six New England states will be eager to support their team this season

New head coach from New Zealand, Ryan Martin, brings experience from coaching in Super Rugby and Mitre 10 Cup. He has also recruited a host of talented international players, some who qualify for the USA, and with better luck with injuries, they should do well.

The New Orleans-based team has made steady progress in three years, moving up from sixth in its first year to fifth in 2019, and was handily placed in fourth when the 2020 campaign came to an end.

Leaning on their experiences from further afield, General Manager Ryan Fitzgerald and head coach Nate Osborne have created an environment where players can thrive. The relocation to the north of the Mississippi seems to have gone down well, too.

USA international Cam Dolan feels right at home despite being thousands of miles down south. Dolan scored a hat-trick on the opening day and was on four tries in five appearances when a line was drawn under the 2020 season.

After all the fanfare surrounding the signing of Rugby World Cup-winning prop, Tendai ‘The Beast’ Mtawarira, Old Glory have kept things very low key this time around in terms of recruitment.

Re-signing fly-half Jason Robertson is a major plus, however. The New Zealand native was the club’s top point-scorer last season and returns from a spell back home in his native New Zealand.

Old Glory were flying high in 2020 and were only behind San Diego in the standings when their debut MLR season finished five rounds in.

Atlanta’s sporting pedigree is on the up and now rugby wants part of the action.

The city recently hosted the Super Bowl and NFL team, the Atlanta Falcons, are a rising force in the game, as are Atlanta United in Major League Soccer.

Now entering their second season, Rugby ATL managed wins against Utah – coming back from a big first-half deficit – and Old Glory, in their five hit-outs in 2020.

A young squad largely made up of locally-based players, laced with South African know-how, will look to kick on this season and do the city proud.

2019 Finishing Position:
Home Ground: Lupo Field, Life University 2,300)
Team Colours: Black, Silver and Red
Head Coach: Scott Lawrence
Major 2021 signings: College star Ryan Rees may not be a household name but the all-American is rated as one of the brightest scrum-half prospects in the country. Pumas centre/wing Bautista Ezcurra will add a touch of class to the midfield.
Main rivals: NOLA Gold

Injuries and the non-arrival of several new signings due to visa issues conspired against New York in 2020.

Ably led by captain Dylan Fawsitt, and with former England back Ben Foden an ever-present in the starting line-up, New York still managed three wins despite only having home-field advantage in one of their five fixtures.

The baseball diamond at MCU Park remains their home ground for now, but the club’s ownership has been vocal in his desire to look for alternative venues outside of Brooklyn.

With Dan Moor scoring tries and Sam Malcolm kicking his goals, Toronto Arrows were flying high at the top of the Eastern Conference when their debut season was cut short.

An already impressive squad has been strengthened further, right across the board, with 56-cap Puma Joaquin Tuculet the most notable addition.

Had it not been for the handicap of playing their home matches on neutral territory, you’d have expected them to repeat last season’s fast start. Unfortunately, the current public health situation means they will not be able to kick-off the season in front of their home fans in Toronto, with the club playing out of Rugby ATL’s ground instead.