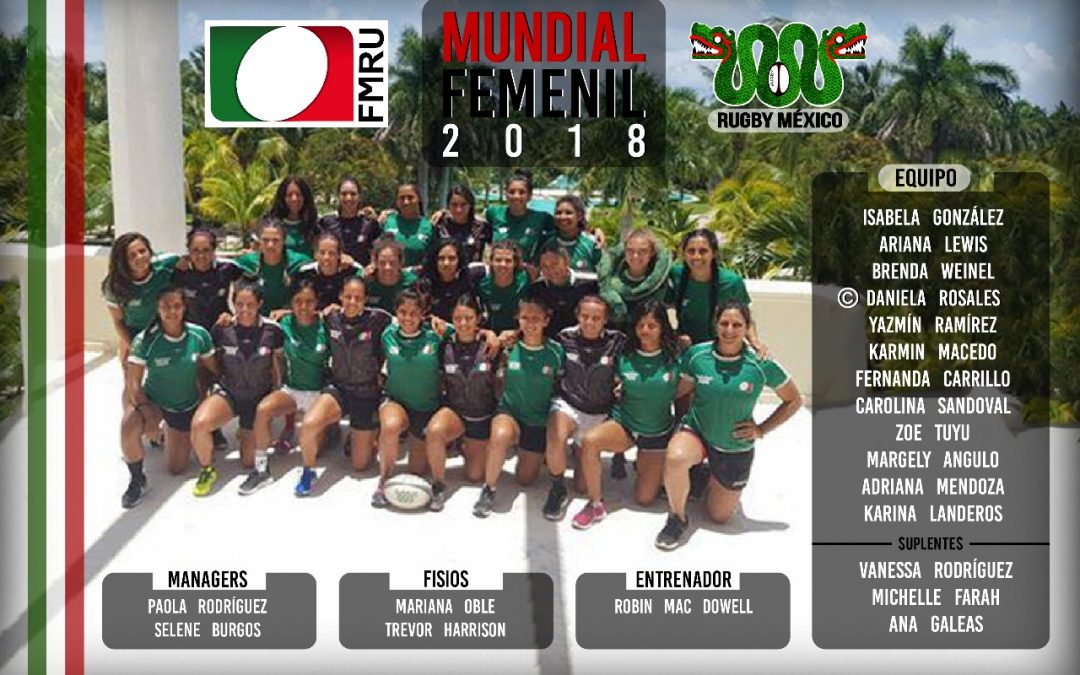 It is an honour to announce the first-ever team to represent Mexico at a Rugby World Cup Sevens event. Since qualifying last November the level of commitment from the athletes, regional coaches, and staff has been incredible. Where we lack resources we make up for in desire, effort, and resilience.  We do not look for excuses we look for solutions. The game is alive and well in Mexico and these young women are on a mission to continue to defy the odds, and put Mexico on the world rugby map. When President Francisco Echgerun announced me as coach early in 2017 we had 7/8 players that were ready for international rugby. Now we are selecting from a competitive pool of 70 with over 40 more in our depth charts driven to one day play for their country.

I would like to highlight the efforts of every single coach, volunteer, tournament organizer, sponsors, FMRU employees, parents, families, friends who have made this journey possible for our girls and our dream.
A big thank you to those that hosted our camps: the Macossay Family & Titanes Rugby Club, Javier Patino & the Cancun Hammerheads Rugby Club, the many Canadian families in Regina Saskatchewan,  Vancouver Island Canada, Shawnigan Lake School, Cowichan Rugby Club, Head Coach Rugby Canada John Tait, World Rugby, and lastly all those that have supported our Donadora Campaigns.
We have selected 12 players and 3 reserves to travel to Canada for our final World Cup Camp July 9th – 16th where we will stay at Shawnigan Lake School on Vancouver Island. We are fortunate to play against the World Cup 3rd seed Canada July 10th at their Training Centre, Westhills Stadium on July 12th. Playing against one of the top teams in the world prior to the World Cup will help us adapt to the speed and physicality which we will face as we take on the current defending World Cup Champions, New Zealand Blackferns.  While in Canada we will be staying and training at the beautiful grounds at Shawnigan Lake School where they are graciously hosting us to help us prepare in the best environment possible.
For the first time since I have been involved in the program since 2014 I feel my team is ready for battle at this level. There is no secret science or magic bullet to make a team great. All you need is time together, competition, and most importantly proper preparation. We have been together most of the first 3 months of the year and going into our final camp in Mexico City this week we will have been together for over 2.5 months straight! The sacrifice, commitment to each other, desire, and belief in what we can conquer is something so powerful. We are on a mission with the entire country behind us.  We will go straight from the World Cup back to our training centre in Mexico, City and then one week later to Columbia to claim Gold at the Central American & Carribean Games!
Our goal is to get better every session, every day, every competition, every month until we arrive at the Olympics in 2020 in Tokyo!
I am pleased to announce that veteran Dany Rosales will Captain our team at the World Cup. Dany has been a huge part of the program for over 9 years. Her determination and professionalism have been constant. Most importantly she has had to really look at her own game and earn her spot in the team. She has realized that to be one of the top players in the world we all need to take our personal preparation to another level. Dany has worked incredibly hard in the last 2 years to lead her team and is a player that leads by example in training.  I could not think of anyone better to lead Mexico out in this historical tournament!
The World Cup will welcome back one of our top players of all time Karina Landeros who has fought back from an injury everyday relentlessly over the past 2 years. She is the most professional committed athlete I have ever come across. She is fearless and will be one to watch for in San Francisco!  Some exciting young players have impressed the coaching staff playing with class well beyond their years: Zoe Tuyu 18, Adriana Mendoza 19, Margely Duarte 20, Vanessa Rodriguez & Ana Escobedo both are 18 and travelling reserves to Canada WC Camp.
Our preparation has allowed us to gain the fitness standards and beyond that is needed to compete at the international level. We will be ready.
Dream. Believe. Succeed.
PORMEXICO