Lesley McKenzie: “I’m not in the game to be a female head coach – I’m a rugby coach” 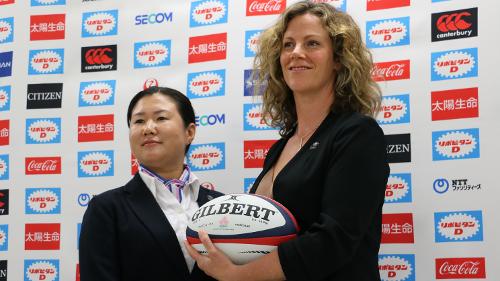 Former Canadian international Lesley McKenzie has already hit the ground running in her first month as Japan head coach, her sights already set on Women’s Rugby World Cup 2021 and developing the next generation of female coaches in the country.

Lesley McKenzie laughs when she hears the question. She has been expecting it.

McKenzie was appointed Japan women’s 15s head coach in January, and has since grown accustomed to being quizzed about the paucity of female coaches in high-performance rugby union.

Of the 12 nations involved at Women’s Rugby World Cup 2017, only Hong Kong and Japan are now coached by women but while the Canadian is aware of that statistic, she is not about to let it dictate how she approaches her new job.

So, when asked if she feels under any extra pressure as a female head coach, her initial answer is a resounding: “No.”

“I’m not in the game to be a female head coach. I’m a rugby coach.

“And it may look different to people outside who are looking at relative numbers but I’m doing the same job as anyone else is and people get just as upset when you lose games if you’re a female as they do if you’re male. So, no I think the pressure is just inherent in what the task is.”

McKenzie’s coaching journey started in 2009, while she was still playing. Having represented Canada at both Women’s Rugby World Cup 2006 and 2010, it took her to New Zealand – where she worked as a Rugby Development Officer in Wellington and Wanganui – before she relocated again to Japan, initially as an assistant coach in the sevens set-up.

She describes herself as “sitting on a really privileged side of the fence at the moment” as a paid coach, and is well aware of the need for positive female role models throughout the profession.

“I’m conscious that it’s an agenda that we need to keep promoting,” she added.

“I’m conscious that it’s important that we have female coaches [that] aspiring players, ex-players and young coaches can model themselves after.

“I know that’s really important, in part because it’s something that wasn’t prevalent when I was coming through as a player and then as a coach.

“So, I don’t want to belittle that at all but I also do think there’s a lot made of it when it really needs to be a question about: is this good rugby being coached? Are we preparing teams well? Are we playing good rugby ultimately?

GETTING TO KNOW THE PLAYERS

“I get over the question now because it’s something that has been asked for a long time of me.”

Much of her time in the role so far as been spent getting to know the players that will form the base of her squad for Women’s Rugby World Cup 2021 qualifiers.

In little over a month after getting the job McKenzie had put on three training camps, designed to give her a look at those currently involved in the country’s 15s club competition.

She also watched tapes of the team’s performance at WRWC 2017 in Ireland, where Japan finished 11th. The squad, though, has not played since that 44-5 play-off win over Hong Kong.

“I hadn’t really followed that World Cup as best as I probably should have and it was a really pleasant surprise,” she admitted.

“A lot of the things I saw were quite exciting in terms of what I’m going to be able to work with.

“They had a good scrum which you would expect Japan would and a lot of the things other than that.”

McKenzie has set her sights on qualification for the next tournament in New Zealand, and is keen to help her new side “pay the admission price to get to the knockout games” once there.

The Canadian is excited by the addition of a quarter-finals stage in 2021, and believes that Japan’s historic win over South Africa at the men’s Rugby World Cup in 2015 should provide her players with the perfect inspiration to get there.

“I think that’s a really cool template to show that image of what you can achieve as a Japanese national team against some pretty big nations,” she said.

“In other words there’s no excuses for us.”

Reaching the quarter-finals would be a huge achievement for a nation that has won only four Women’s Rugby World Cup matches in their history – and only one of those in the main draw.

And although McKenzie has been in her job for just two months, she is aware that on-pitch performance is not her only measure of success in Japan.

She accepts she has a responsibility to provide a pathway for the next generation of Japanese coaches as well.

“Absolutely,” she said. “It’s an understood part of my role and it’s important to the JRFU [Japan Rugby Football Union] that we bring female coaches through as well.

“They are quite proactive about promoting women players through to coaching. I think that’s really good, they’re really positive.

“I think they set a really good example in how they do that, or at least their determination to do that and resource that well.

“I guess the important thing is to find the best way to go about doing that.

“But again, I did work in coach education in New Zealand and it would be a shame not to do what we can to keep growing coaches because the thing that you find when you’re working in coach development is the root problem is we haven’t got enough good coaches at all levels.

The reason for that is something McKenzie discussed at length when she worked on New Zealand’s North Island.

“There’s so many other demands on people’s time that it becomes more and more of a sacrifice to give your time for nothing,” she said.

“I’m so incredibly lucky to be doing coaching for a profession at the moment but I’m aware of how many coaches out there aren’t.

“And so I think every organisation has a real responsibility to make it as enjoyable for coaches and coach development as they can, and is supportive for them, because that’s how we get good athletes.”