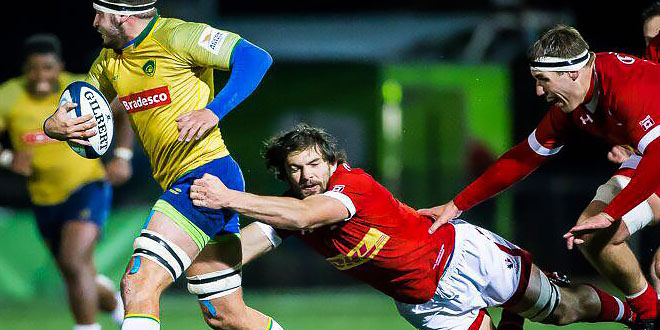 Rugby Americas has released the kickoff times for the 2019 Americas Rugby Championship. First played in 2016, 2019 marks the 4th edition of the ‘ARC.’ The tournament consists of the national teams from USA, Brazil, Canada, Chile, Uruguay and Argentina’s developmental side, the Argentina XV. Argentina XV won the inaugural tournament in 2016 with the USA earning the title in ’17 & ’18.

The preeminent rugby competition across North and South America, the Americas Rugby Championship is happy to announce that 2019 ARC schedule has been designed, much to the delight of fans and broadcasters alike, with zero overlap amongst each of the 3 games that take place each weekend.

Broadcast details for each market will be released in mid-December.

Canada earned a 3-0 record in the World Rugby repechage tournament in Marseille, France and claimed the 20th and final remaining spot for the 2019 Rugby World Cup in Japan. The Canadians defeated Kenya, Germany, and Hong Kong to book their ticket in Pool B where they will play alongside defending champions New Zealand, South Africa, Italy and Namibia.

The 2019 RWC will mark Canada’s 9th and earns them the distinction of having played in each tournament since the event’s inception in 1987. The only other ARC union to achieve this feat is Argentina. The USA will play in its eight RWC and next year will be Uruguay’s fourth Rugby World Cup.

Americas Rugby CEO Dan Payne said: “Having Canada qualify to Rugby World Cup 2019 keeps their record intact of competing in each tournament. Furthermore, it adds competitive value and purpose for the Americas Rugby Championship 2019 as four team’s will be using the tournament as a crucial part of their preparation for Japan 2019. For Brazil and Chile the opportunity of testing themselves against these teams presents itself as they begin focusing on the road to RWC 2023.”

“Our tournament has gone from strength to strength since it was born in 2016 and with cities and kick-off times already cast in stone, teams and fans can start focusing on preparing for what is certainly North & South Americas premier rugby competition.”

Played over a six-week period, the round-robin tournament includes one bye weekend for the first time to ensure player welfare is at the top of the agenda for the Americas Rugby Championship.

Broadcast information will be announced in mid-December.

The USA capped off 2018 with a best-ever 9-1 record in test matches, a record that included first time victories over Scotland and Samoa.

Uruguay also finished on an upswing with a historic win over Romania 27-20 in Bucharest. The victory was the first time Uruguay has beaten Romania and the result allowed Los Teros to finish 2018 with a #17 WR ranking. The ranking is Los Teros best mark since 2004.

Keeping consistent with their peers, Canada finished November 3-0, qualified for the Rugby World Cup and, as a result, finished the 2018 season up from 23rd to a World Rugby ranking at #20.