Jillion Potter: A touch of genius 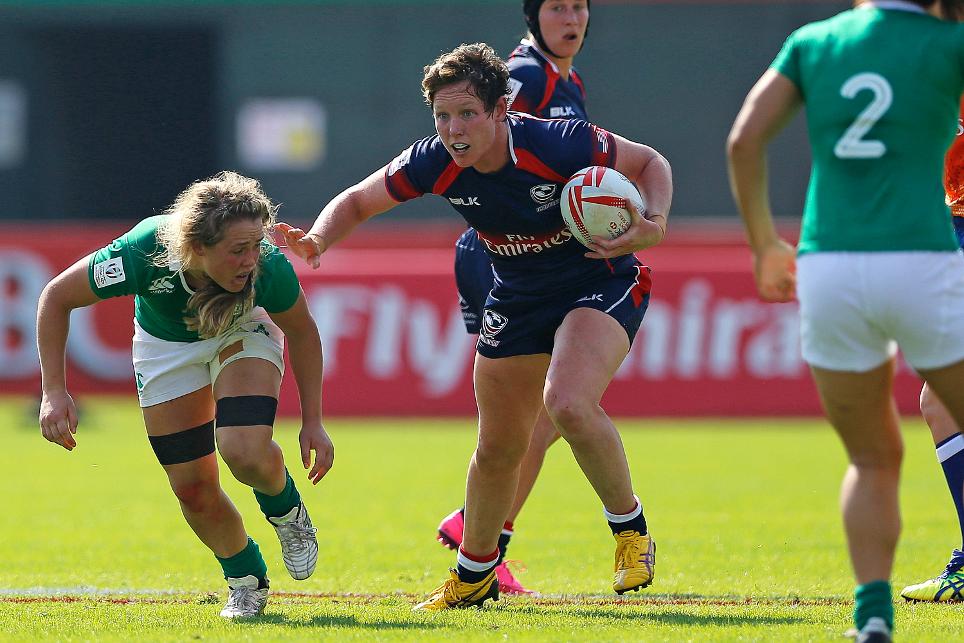 Another new chapter will be written into the remarkable story of Olympian and World Rugby Women’s Leadership Development Scholarship recipient Jillion Potter when she takes up her assistant referee role at RWC Sevens 2018.

Sportswomen do not get any more inspirational than Jillion Potter.

A USA Eagle for nearly 10 years, Potter played in Women’s Rugby World Cups in both 15s and sevens and led Team USA to the Rio 2016 Olympic Games.

But that does not tell half the story. In the last eight years, the 32-year-old has overcome a broken neck and a rare form of soft tissue cancer – synovial sarcoma – not once but twice, on her way to becoming a legend of the game.

“I’ve been cancer free since January, almost seven months. I have another scan in August. Feelings don’t say much, but I feel it is past me now,” she told World Rugby.

Potter’s focus is instead on her new role as an assistant referee at Rugby World Cup Sevens 2018 in San Francisco on 20-22 July, while also making the most of the being named one of the inaugural recipients of the World Rugby Women’s Leadership Development Scholarship earlier this year.

I am excited and humbled to be selected as a recipient of @worldrugby Leadership Development Scholarship. I am extremely grateful and honored to represent USA & @rugbyamericasnorth in such an important and impactful endeavor. I know these programs will help drive forward gender balance, inclusiveness, and development in rugby for girls and women. Together we will accelerate the global development of women in rugby, on and off the pitch. #internationalwomensday #movingforward #impactful #nextgeneration #positive #createchange #empowerwomen

“I started refereeing in February and I’m taking it slowly. It is a really humbling and fulfilling experience and I am so pumped to be an AR and in-goal judge at the World Cup.

“As a player, you’re like, ‘I know how to play the game, so how hard can it be to be a ref?’ But it is incredibly hard – and humbling – to learn to see the game a completely different way. And it’s worth it. It is a wonderful way to give back to the game and show other players that it is a viable alternative if they are injured or even if they don’t want to play but still want to be involved in rugby.

“I am so excited to be refereeing. In the States, I think refereeing is going to be pivotal to our success on the pitch. You have to have great referees to bring that level up and we just need more committed and involved referees.”

Giving back to the game that she says helped “save her life” is something Potter intends to do as a World Rugby scholarship recipient.

“The mission really resonated with me and I thought it would be a really important way to give back to the game. It is a massive responsibility to put your hat in the ring for something like this, and I am really honoured to be a part of it. I hope that I can make a difference,” she said.

“Whether it’s refereeing, playing, educating or administration, we need more women to get involved in rugby, and I think a large part of that is to do with the culture and breaking down barriers.

“We want to increase female participants in leadership roles and also on the ground, and we want our kids to be playing rugby and bringing the whole game up. Having greater retention – keeping women involved in the game – is also crucial.”

“Right now I am in the middle of a Women in Leadership Certificate and later, in September, I’ll be attending a Leadership Conference at Aspen Institute. I am really focused on values and self-reflection and how to influence others. For me, that is going to be a pivotal conference to attend because it will give me the tools to use my voice in a way that is effective and helps put actions into motion.

“I am really pleased to be a part of the scholarship because it brings together a group of people that have similar ambitions for their own country and rugby within their lives. If we can come together and advise each other and bring each other up a level, it can only elevate the game. I am looking forward to meeting some of them in the near future.”

A native of Austin, Texas, Potter first started playing rugby at the University of New Mexico in Albuquerque. Like most newcomers, it took a while for her to be persuaded to give the sport a try. But it didn’t take long before she was “hooked”.

“During my first week of classes, numerous women approached me at different times, saying ‘hey, come and play rugby’. Eventually, I thought I might as well try it out,” she said. “The first session was tackling practice and after my first tackle I thought ‘I’m into this’.

“First and foremost, I really liked the sense of community and the fact there were people from different backgrounds and different shapes and sizes involved.

“A few months down the road my coach told me he’d put my name forward for the USA U19s squad. He said just do what they say, don’t ask too many questions and just play and have fun. I kept my head down and it’s fair to say I learned a lot.

“I remember pointing to the 22-metre line and asking the captain, ‘what’s this?’”

From those humble beginnings, the Denver resident went on to enjoy a career that most people could only dream of and if she is half as good a referee as she was a player, then the game is in safe good hands.

“Rugby is probably one of my biggest gifts, I couldn’t think of my life without it. It is how I met my spouse, and some of my closest friends. It provided community and support in some of my toughest times. Rugby has saved my life in a lot of ways.”