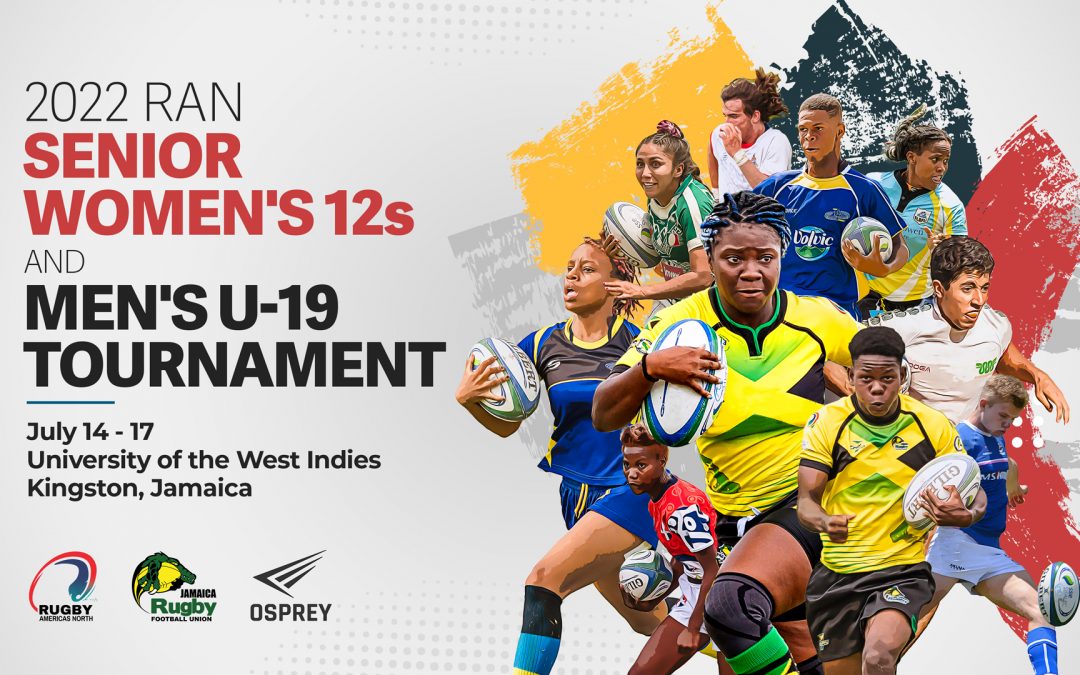 March 4, 2022 – Rugby Americas North is delighted to announce that the Jamaica Rugby Football Union will host the 2022 RAN Senior Women’s 12s and Men’s Under-19 tournament from July 14 – 17 at the University of the West Indies in Kingston, Jamaica.

The four-day event marks the return to action for both competitions since the last edition of the tournament at the Bellevue Plantation and Polo Club in Barbados in July of 2019, with 16 teams from across the region competing between the two formats.

Despite not being able to host domestic and international competitions for the last two years due to the COVID-19 global pandemic, the Senior Women’s 12s tournament marks another growth milestone for women’s rugby throughout the region after competing the last five years in 10s.

This tournament remains an important development tool for the women’s game around the region as part of RAN’s strategy to encourage unions to build towards fifteens domestic programs. The number of teams competing, and the caliber of play continues to increase, and this year we expect another high-quality competition.

The Senior Women’s 12s tournament will take place on July 15th and 16th; The Men’s Under-19 event will compete over three game days on July 14th, 15th and the finals on the 17th.

Entering its 19th year, the Men’s U-19 tournament is also an important development tool for the region. For many young athletes it’s a first introduction to the international stage and the year’s only chance to compete against high-caliber teams in a condensed tournament format.

To support player welfare throughout the Men’s U-19 tournament, pool matches on the first two days will consist of two 20-minute halves, with the final game on Sunday being 35-minute halves.

Looking back to the last event in 2019, in the women’s competition, Mexico and Jamaica met in the final with Las Serpientes lifting the championship trophy after a 22 – 0 victory.

The gold medal final – which was a repeat of the previous five years – was between USA South and Mexico. In the end, Mexico used their staunch defence and pinpoint accuracy to outlast the Americans and lift their second consecutive trophy with a 30 – 20 victory.

The entire tournament at the University of the West Indies will be streamed live on RAN’s website, with photos, highlights, interviews, schedules, and other details to be provided closer to kick off.

“Rugby Americas North is excited to announce that the Jamaica Rugby Football Union will host our 2022 RAN Senior Women’s 12’s and Men’s Under-19’s tournaments at the University of the West Indies in Kingston this Summer, after they submitted forward a detailed and comprehensive bid.”

“These tournaments are vital development tool for our member Unions throughout Mexico and the Caribbean. The July competition will be the first chance for Unions to give their athletes crucial international playing time since COVID-19 began. With our senior women having played 10s over the last five years, it is exciting to see the progression to 12s despite a global pandemic halting most domestic competition around our region.

“Similar to our other recently announced international tournaments, we will be following strict COVID-19 protocols set forth by RAN and the Jamaican government in the lead up to and during the tournament to ensure player, staff and volunteer safety.”

“We are ecstatic to have been granted the privilege of hosting this tournament. It is a major steppingstone in our development of Rugby Union in Jamaica and hope it will be a catalyst for hosting more regional and international tournaments in the future.

“Our team is committed to making sure it will be a memorable event for all participants.”