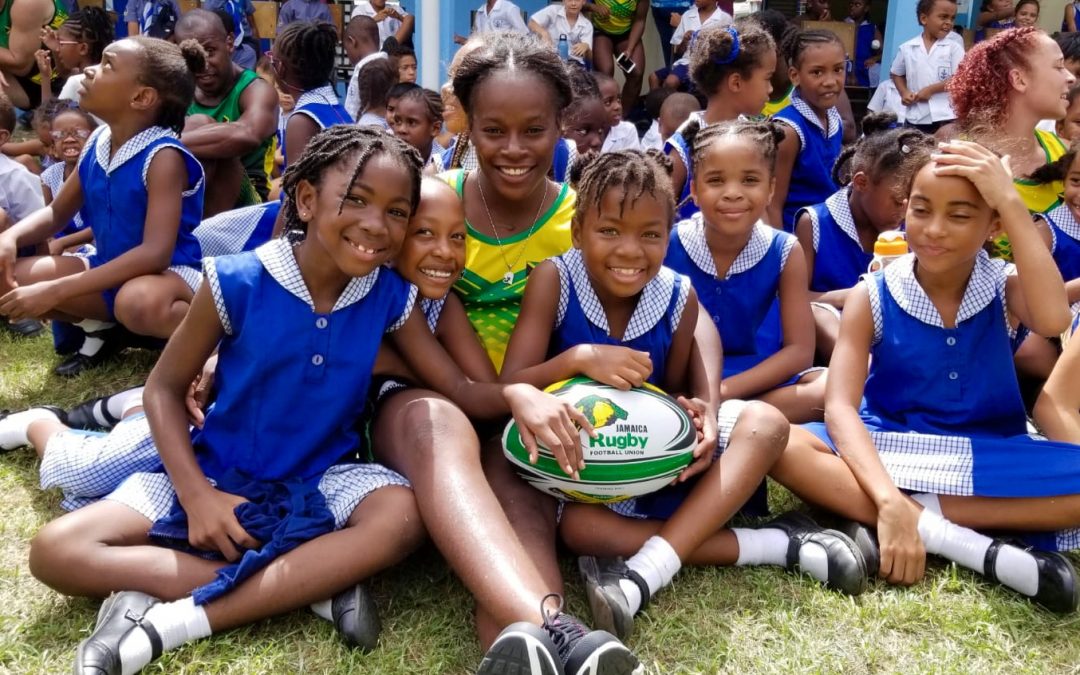 The Jamaican Men’s and Women’s teams made one of their first stops in Barbados at St. Gabriel’s School in Bridgetown on Thursday. The national teams spent over two hours at the prep school playing games, interacting with the kids, and introducing the school community to the game for the first time.

Team Manager Bruce Martin was impressed with the student’s enthusiasm and hopeful Barbados Rugby will have a whole new generation of rugby players coming through the pipeline.

“These kids had fun today,” said Martin. ” They didn’t want to leave school. Their parents came and joined in and tossed the ball around with us and it was really a fun day.”

All these smiling faces!!! @jamaicarugby_official visited St. Gabriel’s School in #Barbados yesterday and delighted over 300 kids with the game of #rugby. We’ll have more pics and the full story coming soon.

With the work of defending their RAN Sevens title, and preparing to build on a sometimes difficult sevens season thus far, the Jamaica Crocs were kind enough to make the stop before turning their focus to the weekend. Jamaica Men placed 3rd at the recent CACSO Games, defeating Trinidad and Tobago in the 3rd/4th place playoff. Jamaican sprinter Warren Weir, who made the switch to Rugby Sevens in time for the Rugby Sevens World Cup in July, 2018, was elated to win a bronze medal in his newly adopted sport, and was immediately recognized by the Barbadian Youth.

“The kids were especially excited by the chance to meet Warren,” said Martin. “They identified him straight away and were telling stories about him. We set up a race and of course the kids won.”

With 24 teams, 15 countries represented, one of the biggest pools of women’s teams in tournament history, and plenty of rugby sevens action, fans won’t want to miss a minute. Matches for the 2018 RTEK RAN Sevens starts at 9.00 am on Saturday. The tournament will be streamed live on RAN Youtube and Facebook pages, and locally on the Trident 10 TV network.