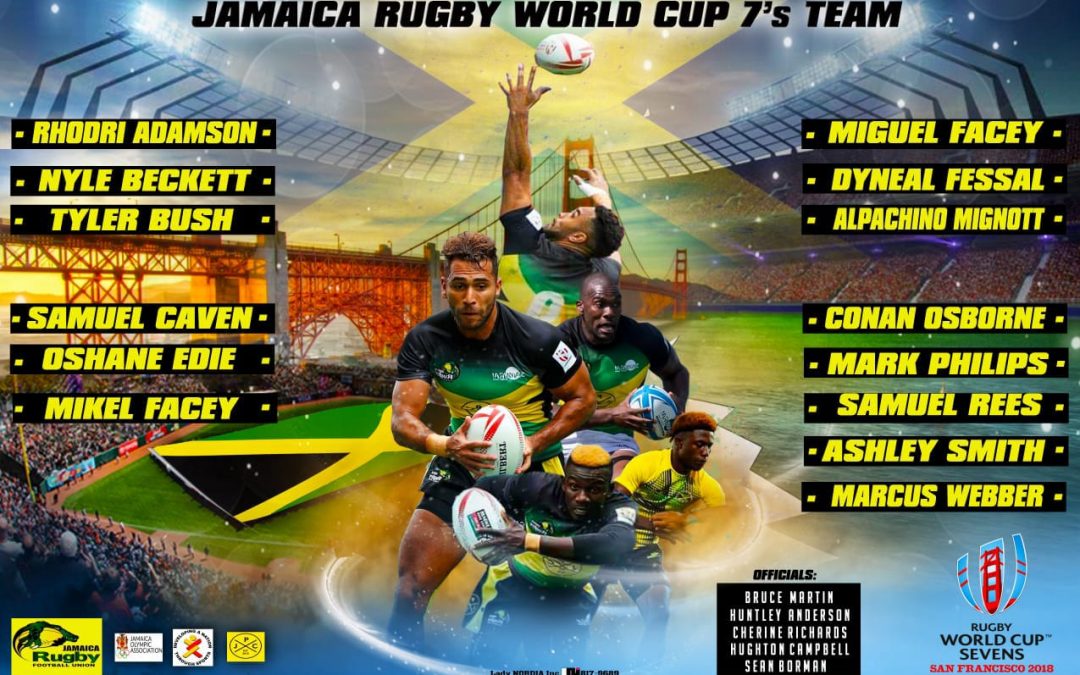 The following is a letter from Jamaica Men’s Sevens Manager, Bruce Martin, ahead of their 2018 Rugby World Cup Sevens campaign.

Out of Many One Team: Enjoy the Journey, Trust the Process

I am pleased to introduce the Jamaica Rugby Sevens team representing the exotic island of Jamaica in the 2018 Rugby World Cup Sevens hosted in San Francisco July 20th through the 22nd. As I reflect on how our team was able to accomplish such an amazing milestone: fairytale, miracle, and surreal are a few words that capsulate the entire journey. As a youth, playing grassroots rugby in the early nineties evoked a passion for the sport that would encapsulate every aspect of my present day life. As a result, I just wanted to capitalize on the love of the sport and give back in a greater magnitude than I could conjure.

Just as my predecessors before me; coaches like Clarence Brown and Sgt. Jacob Thompson. These pioneers set the tone infused in me and thus implemented a vast amount of understanding and appreciation for the sport of Rugby. From attending Man of Jamaica Rugby, training camps, 7s in United Kingdom, they prepared us for this moment leading up to the Rugby World Cup.

The sport of Rugby in Jamaica runs through the veins, fuels the heart, nourishes the soul, educates the mind, and acts as a monument in building the character of each and every player.

The sport of Rugby in Jamaica runs through the veins, fuels the heart, nourishes the soul, educates the mind, and acts as a monument in building the character of each and every player. With just my dream and a passion for rugby, a five year plan was drafted, and from that, within just two years, a concept was then formed into an idea and shaped and executed on how to get Jamaica Rugby to the highest achievable performance level. Needless to say, all was accomplished with little to no resources and funding. With minimal financial support, limited sponsorship, and insufficient coverage, our outcomes often seemed dismal. However, donations infused with determination and sustained with dedication, our team has proven that we belong and are a representation of every grassroots rugby player not just in Jamaica but the entire Caribbean. The desire is that the accomplishment of our Jamaica Rugby team reaching such highs, to be a part of one of the biggest stages, Rugby World Cup, will evoke, awaken, and promote that “I too can achieve” concept and polish it into a movement in and around the grassroots Rugby community.

The team’s performance potential was first observed and demonstrated in the 2012 qualifier for the 2013 Hong Kong 7s led by coach by Conrod Omally. This 2012 team paved the way and emancipated the minds of the world to the knowledge that Jamaica not only plays the sport of Rugby, but they participate with heart and perform with passion and pride each and every time. With that knowledge of heart, passion, and pride, the captain of the Jamaica Rugby team encapsulates it all. He was an 18 year-old college youth watching from the South stand of the stadium in Hong Kong. With Jamaican heritage by means of his grandparents hailing from St. Mary Jamaica, he like many others were not aware that Jamaica played the sport of Rugby. Through networking he was put in contact with Jamaica Rugby Football Union (JRFU) to determine various channels on assisting the team in exceeding current potential from then to now. What emerged from that conversation was scoring the winning try last November by this young man that solidified our teams’ spot at the Rugby World Cup, and erected a platform of talented, dedicated, and skilled individuals that represents our team. I am pleased to officially introduce the Jamaica Rugby Team Captain; Conan Osborne.

Our team of Jamaica Rugby players have devoted and sacrificed time and finances to reach this platform at the Rugby World Cup. Sacrifice is at the heart of leadership and as a result has made every player of the team a leader. They have sacrificed countless hours in the gym and on the field preparing themselves to perform at their highest possible level. They have put others above themselves and done what is best for the team, often times relinquishing their own rights. To that they deserve a standing ovation.

The road to our success cannot go without mentioning profound individuals such as coach Huntley Anderson who tirelessly strived to ensure that the team practiced and nourished their mind, body, and soul with the fundamentals of grassroots rugby in Jamaica. Also, Jamaica’s RAN7s 2015 player Marcel Garvey, who in addition coached the Jamaica Rugby team in Hong Kong 2017. Sincerest gratitude to our 2014 -2016 Jamaica Rugby Chairman Sheldon Jackson and our 2016 JRFU Chairman Jerry Benzwick, which instilled their trust in thrusting Jamaica Rugby to the next level. The result of such trust and support were the Jamaica men’s team representing again in Hong Kong and the Jamaica Lady Crocs is their first-ever Rugby Americas North Caribbean women’s team to qualify for Hong Kong 7s 2017.

Additionally, what is a team without the full support of family and friends making the ultimate sacrifice of time? There are so many things to say but not enough words to solidify the many hard working volunteers, coaches, managers, physios, and administrative team behind the scenes. Special thank you is extended to Huntley Anderson our Head coach going into the World Cup, Hughton Campbell UK Jamaica manager/coach when needed, Cherine Richards Jamaica Manager, Tracy Hayes JRFU admin, Andy Allen UK admin, Patrick Alexander, Mr Burke, Olly in Hong Kong. To our sponsors on this journey, Sandals, Jamaica Patty Co, JOA, SDF, RAN, JAANC, Samurai, The Night Sky, Rex Club, Opro, ATL, a heartfelt thank you.