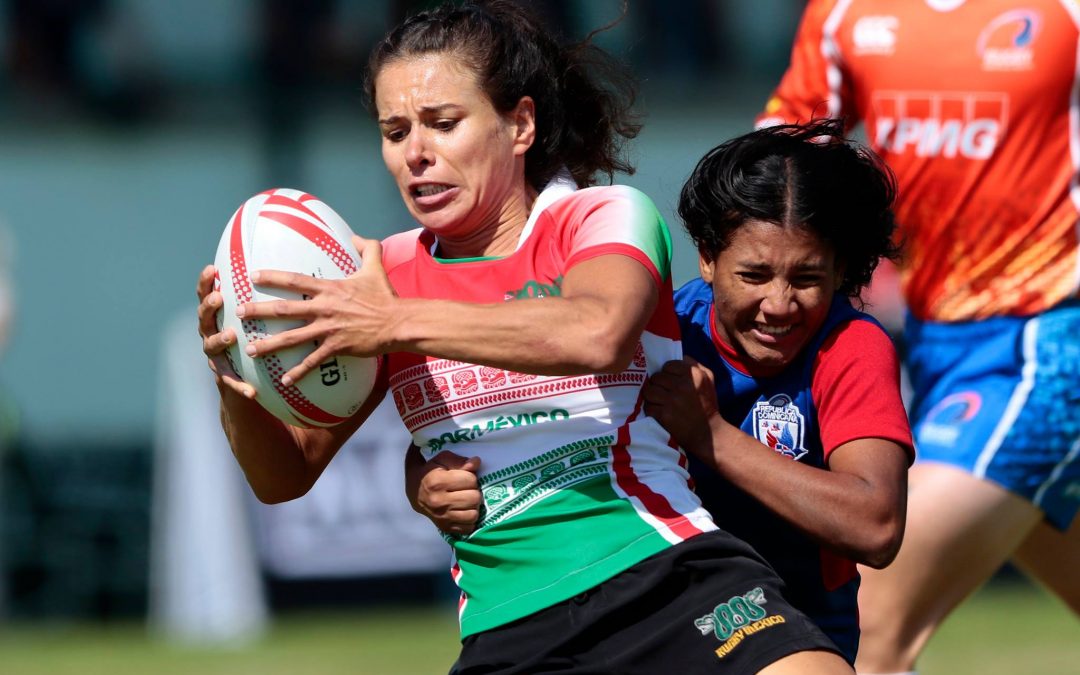 Bridgetown – After a grueling year of competition that has so far seen both teams participate at the Commonwealth Games in Gold Coast, Australia, the Rugby Sevens World Cup in San Francisco, USA and the CACSO Games in Barranquilla, Colombia, the Jamaica Men’s and the Mexico Women’s National Rugby Sevens teams are targeting the 2018 RTEK Rugby Americas North (RAN) Sevens in Barbados for repeats of their respective successes in the 2017 edition that was held in Mexico City.

Affectionately known as the Jamaica Crocs, the  Jamaican Men’s National Rugby Sevens team placed 3rd at the recent CACSO Games, defeating Trinidad and Tobago in the 3rd/4th place playoff. Jamaican sprinter Warren Weir, who made the switch to Rugby Sevens in time for the Rugby Sevens World Cup in July, 2018, was elated to win a bronze medal in his newly adopted sport, and will be making the journey to Barbados later this month. The Mexican Lady Serpientes similarly impressed with a Bronze medal performance against French Guiana in the Women’s 3rd/4th place playoff at the CACSO Games, winning 12-0 in a hard fought final.

Neither team can take it for granted that they will be able to repeat their successes in Barbados when the 2018 RTEK RAN Sevens takes place at the Bellevue Plantation and Polo Club in Waterford, St. Michael on September 22-23, 2018. The Guyana Men’s “Green Machine” will be seeking to avenge their last minute loss to Jamaica in the 2017 final, while the Jamaica Lady Crocs will be snapping at the heels of the Lady Serpientes, after an uneven performance in 2017 saw them narrowly qualify for the CACSO Games courtesy of a Trinidad and Tobago loss in a “winner take all, loser gets nothing” final match in Mexico City.

Teams from 14 Caribbean countries, plus Mexico, will be vying for the Men’s and Women’s titles, with a spot at the 2019 Hong Kong Sevens Sevens World Series Qualification tournament and the 2019 Pan Am Games in Lima, Peru, awaiting both winners. 14 Men’s and 10 Women’s teams will be competing over two days for the coveted titles. The full list of competing teams is as follows:

The 2018 RTEK RAN Sevens is the first of two major Rugby Sevens tournaments being staged in Barbados this year, with the Mitsubishi Electric Rugby Barbados World 7s (MERBW7s) being held at the iconic Kensington Oval on December 8-9, 2018.

Rugby and polo a perfect synergy

Despite a last minute venue change forced by a legal dispute with a neighbour of the Barbados Polo Club, the original venue for the event, the Local Organising Committee of the Barbados Rugby Football Union (BRFU) took that setback in stride and is focused on staging a successful tournament at Bellevue. Tournament Coordinator on behalf of the Barbados Rugby Football Union (BRFU), George Nicholson, revealed the motivation behind the successful bid by the BRFU to host the 2018 RTEK RAN Sevens.

“When we found out that the 2018 Masters Football tournament was going to be staged at the Barbados Polo Club, we knew that this was an opportunity to host a fantastic regional Rugby Sevens tournament at a perfect location. Rugby clubs co-exist with Polo clubs in Argentina, so that is itself is nothing new. Having a chance to showcase the best of Barbados’ Sports Tourism offerings and further expose the sport of Rugby in Barbados was an opportunity to good to pass up on. That we were able to secure another venue so quickly, with the help of the Barbados Polo Club, speaks volumes about Barbados’ potential to host international sporting events.”

Barbados Men have momentum in front of home crowd

The Barbados Men’s team has also been hard at work in preparation for the upcoming tournaments. During a 10-day tour to Buffalo, New York and Doylestown, Pennsylvania, they won two tournaments and placed third in another. Captain Sean Ward was pleased with the team’s performance and expressed confidence that Barbados would do well at their home tournament. “This year’s US tour was very encouraging for us as a team. We’ve now consistently shown we can compete solidly and win at an international level, against some tough challengers. We are now looking forward to the RAN Sevens and the MERBW7s later in the year, and because it’s a home crowd we will be even hungrier for the win,” he said.

Buzz is building for RAN Sevens

Private sector support for the tournament has been strong, with RTEK Services Limited coming on board as the Title Partner, Infra Rentals Limited providing valuable technical support and the Tourism Development Corporation supporting the marketing and promotion of the event.

A Celebrity Tag Rugby tournament will precede the 2018 RTEK RAN Sevens on Sunday, September 16th at the Trents Playing Field in Holetown, St. James from 3.00 pm. Dubbed the “Battle of the Towns” the tournament will feature local celebrities such as Mac Fingall, who will team up with players from the Get Into Rugby youth program and the Bajan Pride Women’s Rugby team.

Action in the 2018 RTEK RAN Sevens starts at 9.00 am on each day of the tournament. The tournament will be streamed live on RAN Youtube and Facebook pages, and locally on the Trident 10 TV network.

To view #RAN7s schedule and results visit the tournament event page. For more information on how you or your company can partner with the Celebrity Tag Rugby Tournament or the 2018 RTEK RAN Sevens, like the Facebook page Barbados Rugby Football Union or contact the BRFU Secretary Kathie Daniel at barbadosrugby@olympic.org.bb

This post has been edited to update the tournament location and include additional quotes about the venue change.