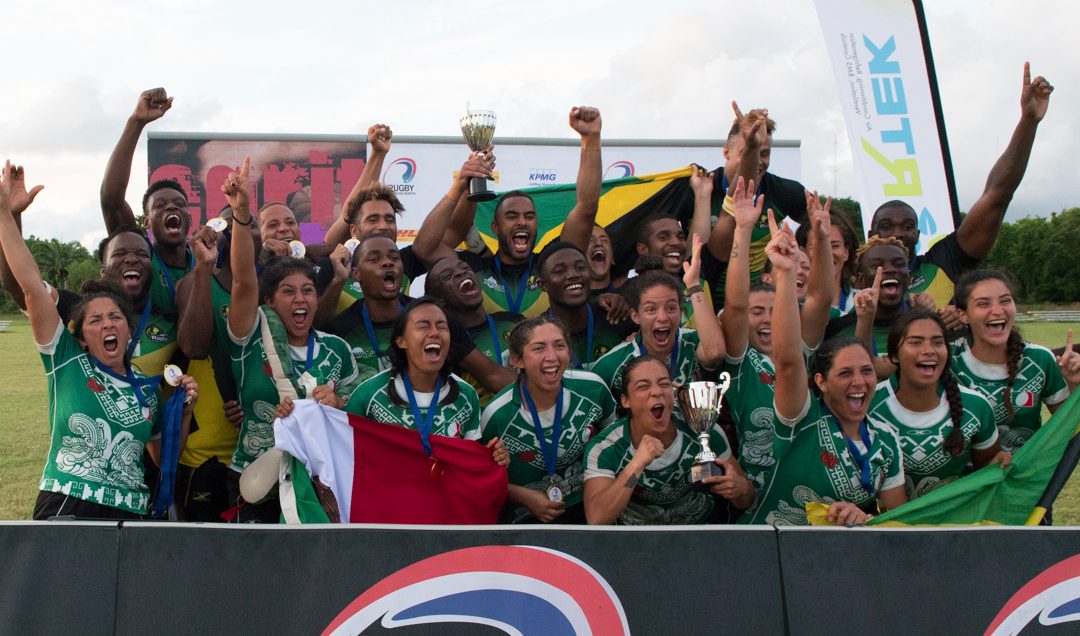 The 2018 RTEK RAN Sevens was an exciting display of regional talent with fans from around Barbados and throughout the world tuned in to two days of entertaining rugby. Rugby Americas North streamed both days of action across two fields and reached nearly 25,000 views on Facebook and Youtube. Over 300 spectators packed the sidelines at Bellevue Plantation and Polo Grounds offering yet another opportunity for the island to grow the local rugby scene.

The opening day of RAN Sevens saw the favorites go through with only a few surprises. The Dominican Republic women stole a victory from Mexico, the previous year’s RAN Sevens Champions. St. Lucia Women also surprised their opponents. After not participating in the 2017 tournament, they put points on the board against top ranked teams and finished second in Pool A. Coming out of day 1, Jamaica, Guyana, Mexico and Trinidad & Tobago men topped their pools and sent them all into the Cup Quarterfinals to kick off day 2. Mexico and Trinidad & Tobago led in the women’s pools, with second ranked teams Jamaica and St. Lucia joining them in the Cup competition.

The men’s Cup Quarterfinals closed the gap in score lines from the day 1 and included at least one surprise. After some easy wins in pool play, Bermuda kept their momentum to open day 2 with a win over a strong Trinidad & Tobago side. It was Trinidad & Tobago’s first loss of the tournament. Bermuda, who finished in sixth place in 2017, is coached by sevens legend Waisale Serevi, who remarked that the team’s success had come from a creating a focus “not on individual performances but a unit of 12 players.” The team ultimately fell to Jamaica in the Semifinals, losing by nine points, but finished strong with a 24-7 win over Mexico to take bronze.

Except for Trinidad & Tobago, the other top 3 pool play finishers sailed through to the Semifinals where Jamaica beat Bermuda (14-5) and Guyana inched past Mexico (17-12), setting up a repeat of the 2017 RAN Sevens Final.

The Men’s final was a thrilling display from two very well-matched teams. Jamaica had their sights on a second tournament title, but six-time tournament winners Guyana were prepared to keep that from happening.

Until the second half, no team scored twice in a row making it an ideal final to cap off an exciting weekend. Tied at the half and tied with almost no time left in the match, two penalties and a yellow card to Guyana ultimately sealed their fate. Jamaica’s Mikel Facey took advantage of the lopsided numbers and dotted a final try down in the far corner of the field. It was his eighth of the try of the tournament and second in the match–the previous one being just minutes before when he intercepted a Guyana pass. At 18 years old, Facey was the youngest player to score in this summer’s Rugby World Cup Sevens. He played for the first time in the 2017 RAN Sevens.

Jamaica’s Conan Osborne reflected on the improvements the team and the region have made in recent years.

“As we’ve progressed over the years, you could feel that teams are starting to take notice of us. From my first tournament in the Cayman Islands, teams didn’t really pay us any mind, however now, it feels that some of the developing teams across the region are looking at how we operate and play as a benchmark and the other teams who are competing for the trophy seem to all want to take our scalp now.

“It’s amazing to come back and show consistency by winning again and it was great to have another battle with Guyana right to the end. The competition across the region is getting really strong, and one thing that happens year on year is the overall ability across the tournament and the way it’s run is continually improving.

“Jamaica rugby are continuing our journey and to see us from a perennial fifth/sixth place team, to a consecutive champion is testament to the talent we have. RAN is a developing region, and other areas of the world are starting to take notice of us.”

In the Women’s Cup Semifinals, Mexico beat Jamaica (19-5) and undefeated Trinidad & Tobago beat St. Lucia (22-5) setting up another repeat of the 2017 RAN Sevens final the year before.

Trinidad & Tobago’s Captain Nicolette Pantor opened the scoring with a great individual effort, but Mexico’s Vanessa Rodríguez answered back with a score on the outside. The teams saw themselves once again in a tie game at the half. The back and forth continued with Leah Kintiba beating several defenders to score an outside try for Trinidad & Tobago to pull ahead 10-5. With just a few minutes left in the game, a dummy pass from Mexico’s Michele Farah set Daniela Rosales free for a long run to tie up the game until the clock ran out. As a two minute sudden death got underway, Trinidad & Tobago fumbled a lineout, incurred a penalty, and failed to get back ten meters, giving Mexico the momentum and Captain Karina Landeros the chance to pick and go for the game winning try.

With the win the team secured their spot at the upcoming World Rugby HSBC Sevens Series in Hong Kong, and the 2019 Pan American Games in Lima, Peru. Las Serpientes have also been invited to the Women’s World Series stop in Glendale to take place October 20-21. Though pleased with the title, Landeros will be looking for more from her team as they head into an intense season of international competition. Listen to an interview with Landeros after the win.

From the tournament Coordinator

As the competitiveness of Rugby Americas North teams continues to grow, and the interest in rugby sevens reaches new heights globally, RTEK RAN Sevens Tournament Coordinator and RAN Board member George Nicholson knows the pressures and opportunities inherent in hosting an international tournament, but was pleased with the result.

“Barbados Rugby Football Union is extremely proud to have been able to host the 2018 RTEK RAN Sevens. In the process we discovered a beautiful rugby venue, which the teams and tournament staff have all praised.

“This is a testament to what we can achieve in Barbados, and it was a positive outcome for rugby on a regional level. We greatly appreciate the assistance of our title sponsor RTEK and our tourism bodies, Tourism Development Corporation and Barbados Tourism Marketing Inc., as well as the numerous sponsors who came on board to ensure we had a successful tournament.”

Positions from this year’s RAN Sevens  will determine seedings for the 2019 RAN Sevens, which doubles as the Tokyo 2020 Olympics qualification tournament.

All the matches from the 2018 RTEK RAN Sevens can be viewed here, and all photos from the tournament can be found here. View all scores here.