Ibañez igniting inclusivity for the future of rugby 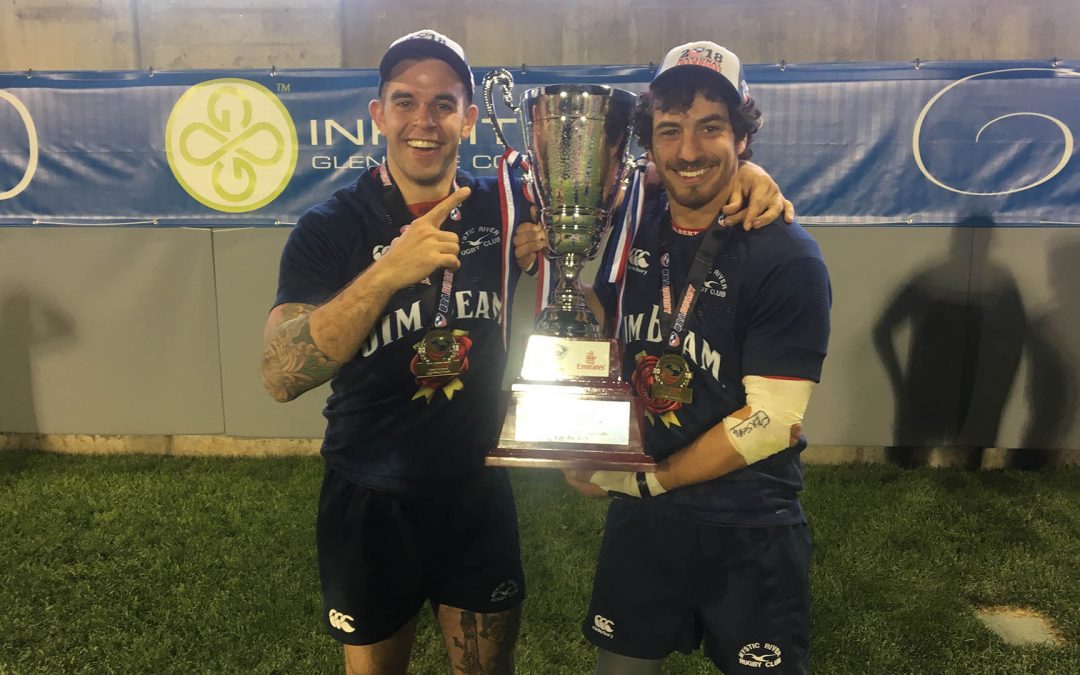 To say 27-year-old pro-rugby player Devin Ibañez is resilient is an understatement.

From playing high school Rugby in Massachusetts, to travelling to as far as Australia, New Zealand, and the United Kingdom for the game, overcoming injury setbacks (including a life-threatening throat fracture), struggling with his mental health, and now as the first openly gay Major League Rugby player, a determined Ibañez does not shy away from a challenge.

During his career, Devin has played elite level rugby locally and internationally, coached and refereed in many capacities, mentored players and youth, and participated in numerous community outreach activities. He is now using his story to inspire others and to advocate for inclusivity in sport, which includes a brand-new BBC podcast https://www.bbc.co.uk/programmes/p0977kt2 to add to his impressive portfolio of works. 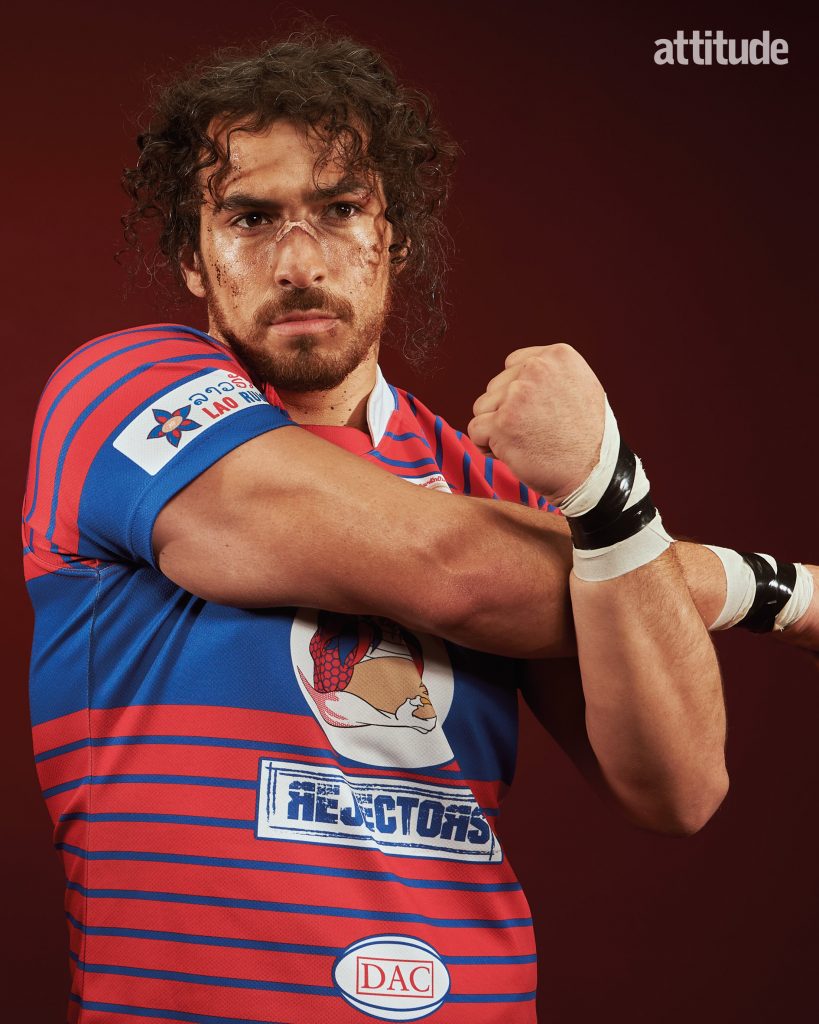 Devin Ibañez during a recent photoshoot for Attitude Magazine

Growing up, Devin tried a variety of sports however it wasn’t until a high school guidance counsellor introduced him to rugby that he finally found his sporting talent. “I’d always loved sports, but never felt like a natural athlete,” he says. “Playing rugby physically agreed with me, and the positive culture was unlike anything I had ever experienced which motivated me to work really hard on my skills.”

In 2013, an ambitious Ibañez tried out for Team USA for the World Maccabiah Games in Israel – the fourth largest sporting event in the world. At just 19-years-old, he was one of the youngest players to make the Elite Rugby Training Squad and despite not making the cut for the final Squad, it only fuelled his fire to grasp every playing experience possible and continue reaching for new heights.

“So, when an opportunity came up to play in Australia, I jumped at it,” he says. During his time Sydney, ‘rugby mad’ Ibañez played religiously morning and afternoon for eight weeks straight before returning to the USA in top form to see out his final season with UMASS.

In 2016, Devin was blessed with yet another opportunity to play overseas; this time, New Zealand. In true Ibañez-style, not only did he play a full season with the NZ Glenfield Rugby Club, but he was also coached and mentored by NZ All Blacks Rugby Union legend Walter Little. Devin additionally lent his hand to local refereeing, coaching, and assisted at the Westlake Boys High School Rugby Academy, so it comes as no surprise that he was awarded Glenfield’s ‘2016 Player of the Year’.

After NZ, Devin seized an invitation to travel to Scarborough in the UK, where he once again began playing, volunteer coaching and refereeing, and continued to win ‘Man of the Match’ accolades throughout the season. 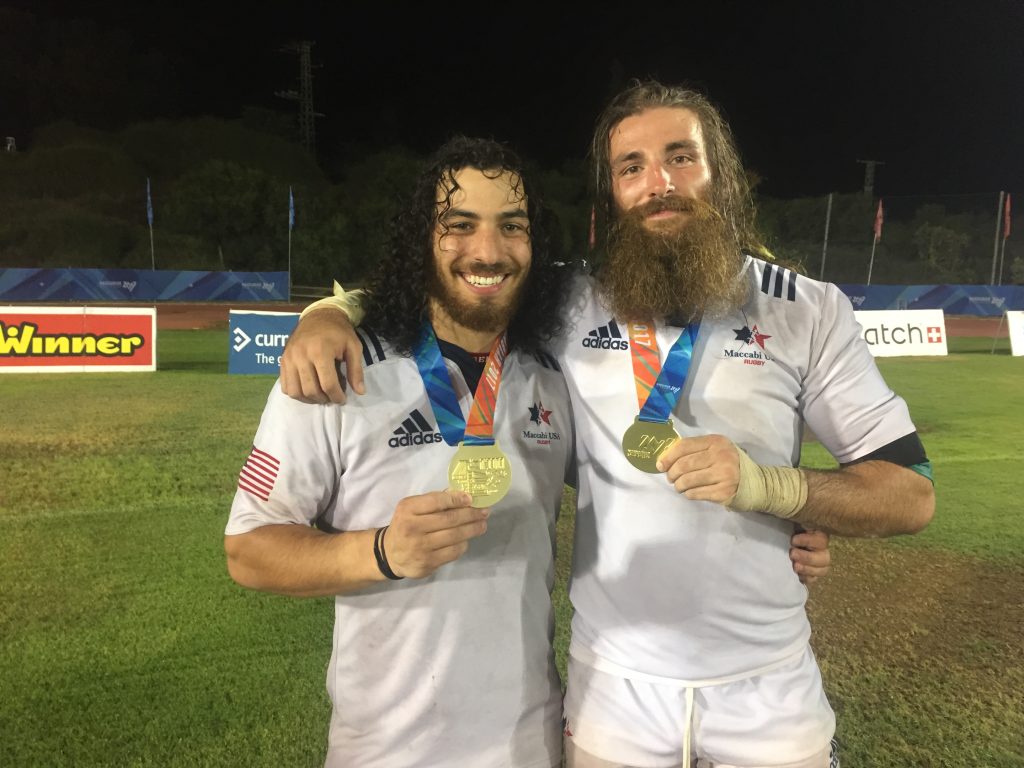 It was during his time playing with Scarborough RUFC, that Devin sustained a potentially fatal throat fracture that changed his life forever.

“It was late in the match,” he says. “I went to make a chest-to-chest tackle but my opponent stood up at the last minute and his shoulder went straight into my Adam’s apple.” Ibañez says he lay on the ground while a medic came and asked if he could breathe unobstructed. “My voice was raspy, but I could breathe, so he cleared me to play on.”

Not only did Devin play on, but his presence was so strong that he was awarded ‘Man of the Match’.

“It wasn’t until after the game that I felt a tickle in my throat and coughed up blood,” he says. Even as it was becoming too painful for him to swallow, Devin did not insist on going straight to hospital. “It was an ‘away’ match so we were three hours from home. I decided to just go and wait it out in the team bus until the after-match festivities had finished – I figured it had been long enough, if it hasn’t killed me by now, I should be ok to try and sleep it off”.

However, the next morning Ibañez woke up choking. “I realised I needed medical attention,” he says. “My local hospital didn’t have an ENT specialist, but the staff called York Hospital describing my injury and they insisted I be transferred immediately in an ambulance.”

Devin was admitted for the night and taken for a CAT Scan the next day to assess the extent of the injury. The scan revealed a fracture in the cartilage of his throat, a hole in his airway leaking air into his chest, and severely bruised vocal cords. “The doctor came straight in saying the results were so severe that the Radiologist told him to personally check on me to make sure I was breathing,” he says. “I was totally shocked. They told me I was breathing through a hole the width of a pen or smaller and that was after 60-70% of the swelling had gone down with medication. I was admitted for another night so they could manage the potential risk of my airway closing over.”

Ibañez stayed a third night in hospital before being discharged with instructions for strict bed rest for at least a week. “I wasn’t allowed to have any additional air forced into my chest because it could cause fatal infection. I had to slowly build up into exercise again and be very conscious of not overwhelming my chest.” 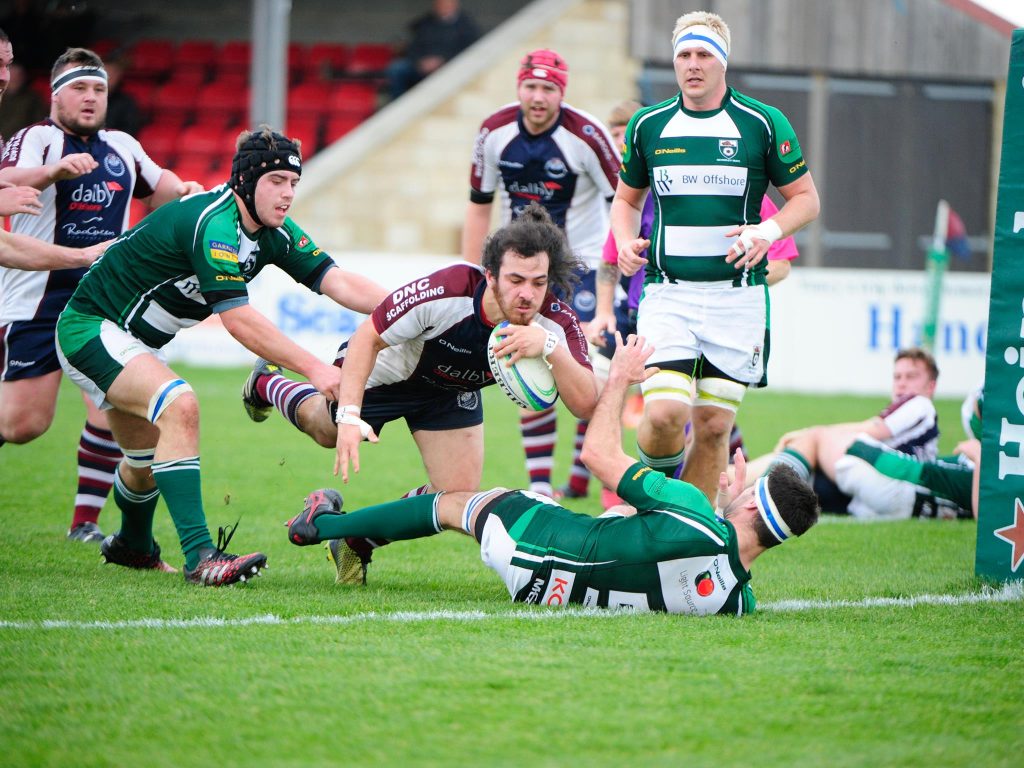 It was during his time playing with Scarborough RUFC, that Devin sustained a potentially fatal throat fracture that changed his life forever.

From injury to Israel …

After receiving his medical treatment, Devin travelled back to the USA to continue training and prepare to represent 2017 Team USA for the next World Maccabiah Games, refusing to let his near fatal injury derail his dream.

Not wanting to risk injury in the lead up, Ibañez focused on building back his fitness rather than playing however ironically, eight days before the Games, he sustained a Grade Two tear to his hamstring. “I was devastated,” he says. “I did everything I could to still get there, and with the unfaltering support of the coaches, I played and started at #7 – we won the first gold medal for the USA in 20 years – it was a very big moment for me.”

Devin returned from the win in Israel energised and began playing for Mystic River Rugby Club where he was part of the winning team at the 2018 D1 National Championships. In 2019, he went on to be one of the original players signed to the first Major League Rugby team in Boston, the New England Free Jacks, and played during their exhibition season against teams like Connacht Academy, the Utah Warriors, and the Toronto Arrows, just to name a few.

In 2020, when the COVID-19 pandemic struck the world, it became heartbreakingly impossible for Devin to travel to see his partner in the UK and forced him again to seriously consider his future and life priorities. “Although my throat injury was obviously a massive wakeup call, the pandemic was the final push I needed to really examine what was meaningful to me beyond being a successful rugby player,” he says. “I saw there was an important space I could fill by being an openly gay pro-rugby player and to start more conversations about the true nature of inclusivity in sport.”

At the end of last year, Devin decided to make his official announcement through Instagram @thatgayrugger.

“I’d wanted to come out publicly for a few years but I kept trying to find the ‘perfect’ moment,” he says. “With all that was going on in 2020, I decided to start a new chapter in 2021 – as the first openly gay Major League Rugby player and to publicly and unapologetically express my love for my partner Fergus.”

Ibañez says he also wanted to inspire other closeted athletes to have the courage to come out and to begin advocating for further inclusivity in sport. “In my 12-year rugby career, I hadn’t known anyone at that high level who was openly gay,” he says. “I’m hoping my Instagram post and platform will encourage others to connect with me and get the support they may need to navigate the complex issues surrounding being a gay athlete.”

Devin says, for the most part, the rugby community has been tremendously supportive. “Both gay and straight players have reached out to me saying that I’ve either helped them to feel more accepted, or made them more mindful of some of our ‘banter culture’ that may perpetuate homophobia in the rugby community without us even realising.” 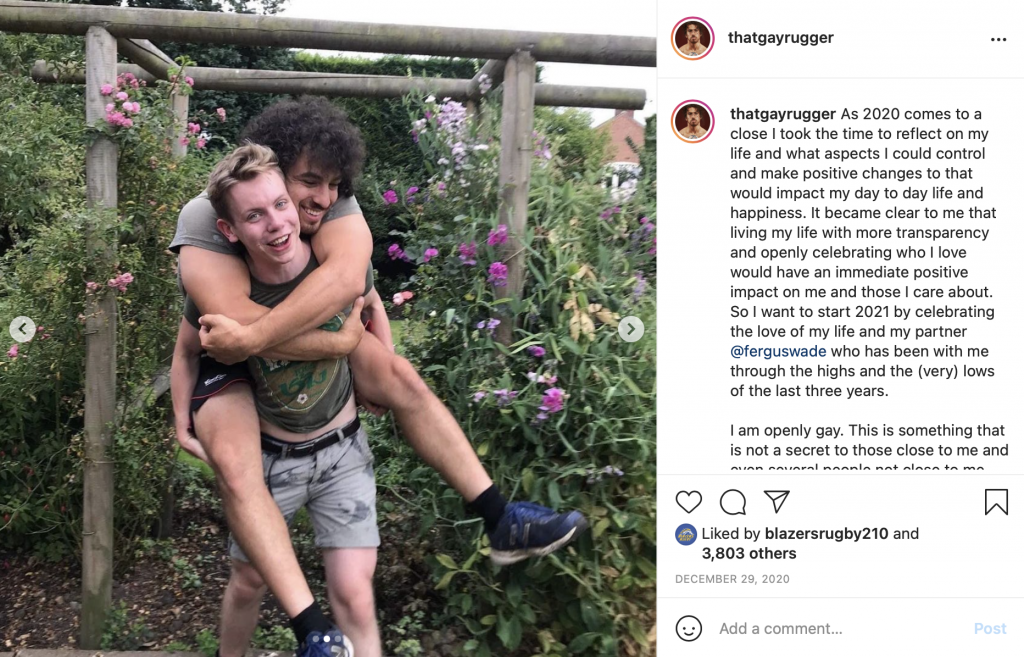 At the end of last year, Devin decided to make his official announcement through Instagram @thatgayrugger

With the weight of the world now lifted off his shoulders, Ibañez says the future looks brighter than ever. Currently coaching with North East Academy and with local children during the COVID-19 pandemic, Devin says his sights are still set on continuing to play elite rugby. “I would love to Captain Team USA at the 2022 World Maccabiah Games and historically be the first openly gay rugby player to do so,” he says.

He also has dreams of hosting a Charity Touch Rugby Tournament with proceeds going towards an LGBTQ-specific charity, as well as travelling the world to share his story and reach as many people as possible. Devin is additionally very keen to play in the UK again where he will be closer to his partner, Fergus.

In perhaps his most passionate venture to date, Ibañez is now using his voice to strongly advocate for the inclusivity of LGBTQ members in the Rugby community. “I would like my experience to help open up more of the necessary conversations around inclusivity in Rugby as the ‘world’s most inclusive sport’,” he says. “And, in light of the recent ban on trans-athletes within international Rugby competition, I think we all need to start asking ourselves if our message is matching the reality – are we really living our core values if we are excluding people from the game? Is Rugby really for everybody? And, what can we do moving forward to ensure equality and equity for all in this game that we love so dearly?” 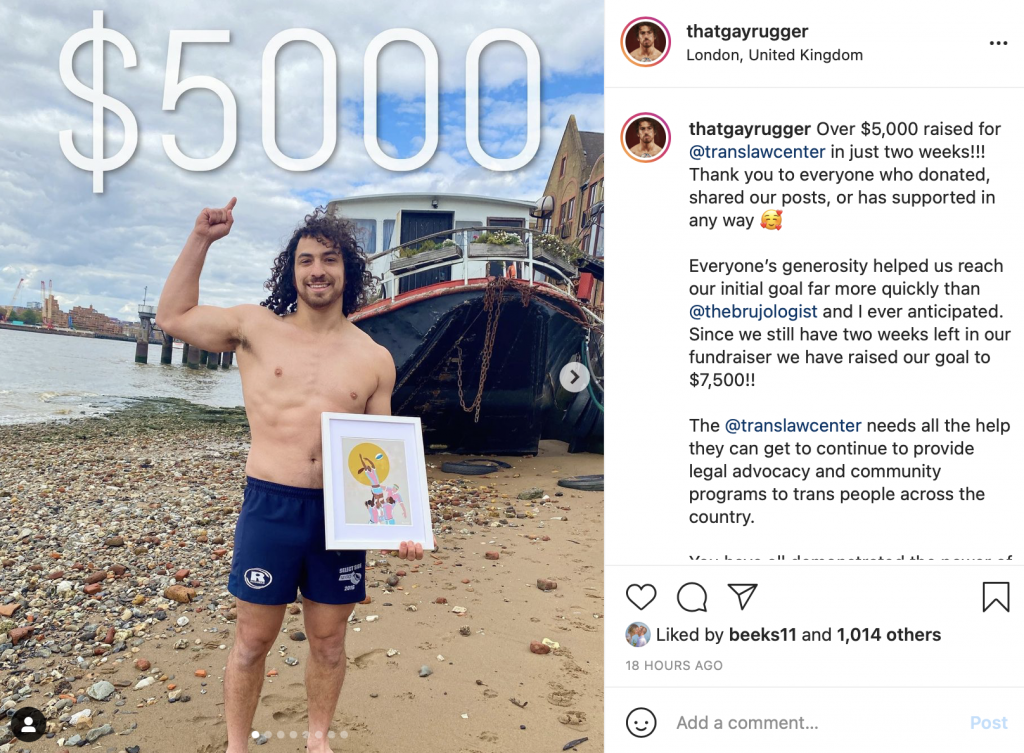 Devin has helped raise over $5,000 for Transgender Law Center

Devin is a passionate advocate for LGBTQ rights – both in rugby and life – and inclusivity. Since the time that this story has been written, Devin has moved back to the U.K. and has been named a global ambassador for International Gay Rugby. Furthermore, on May 10th he launched a fundraiser for the Transgender Law Center in the USA that has to-date raised more than $5,000.

Keep up to date with the initiatives, fundraising campaigns and competitions he’s involved in by following Devin on his Instagram account.