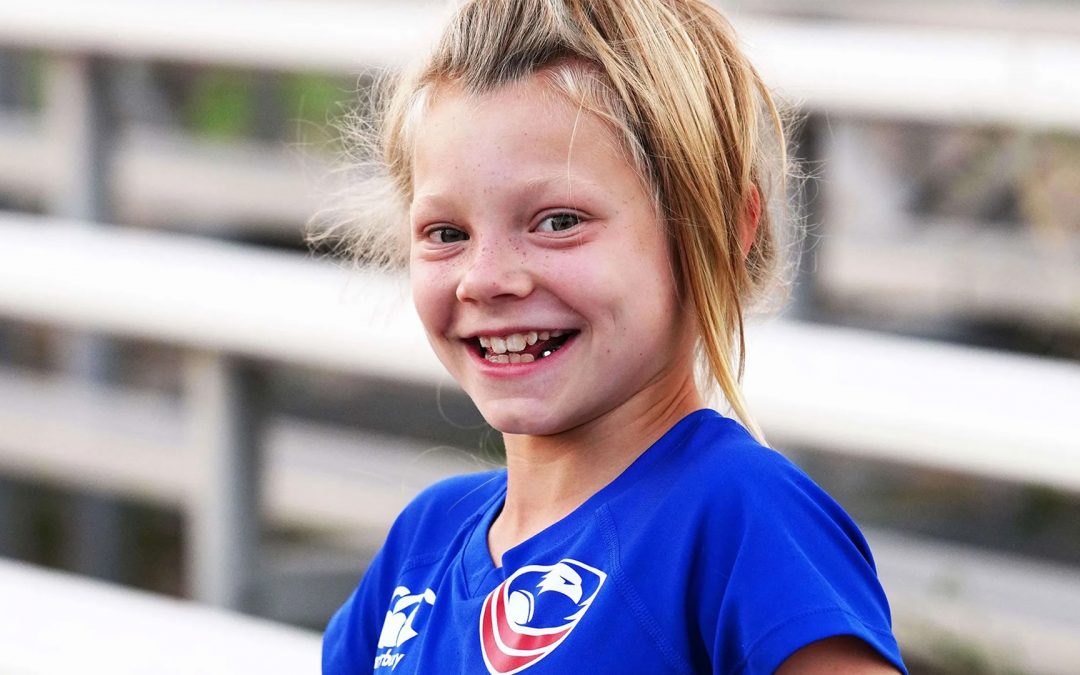 Elin was only six years old when she was taken to her first rugby sevens tournament but the experience would have a profound impact on her young life.

Watching the HSBC USA Women’s Sevens alongside her parents at Infinity Park in Glendale, Elin was mesmerised by the power, speed and skill of the players on display.

As the family made their way home that evening, she had only one thought in her mind: “I want to play that sport!”

Fortunately for Elin, Girls Rugby Inc run a programme in Colorado, but there was an obstacle to be overcome before the future Youth Unstoppable could be enrolled.

Elin was in the First Grade at the time, a year younger than is required to register for the Girls Rugby programme in Colorado.

However, younger players are considered on a case by case basis and after consultation with her parents it was decided that Elin was ready to play.

It’s fair to say she has not looked back. “I play rugby because it’s fun!” Elin, now nine, told World Rugby.

“My favourite part is running with the ball and diving in for tries.”

In the three years since she first watched on in awe as the world’s best sevens players sprinted around a pitch in Glendale, Elin has dedicated herself to the game.

She gets up earlier than the rest of her family in order to start training, and once at school rugby has become the focus of numerous projects and activities.

During the COVID-19 pandemic, in the hope of recruiting new players and getting to know some of her classmates better, Elin introduced them to rugby as she led an online PE lesson.

“Rugby players are tough and competitive. Playing rugby has helped me to challenge myself and has increased my self-confidence,” Elin said.

“Women get to be tough in rugby and get to challenge themselves. If more women played rugby, they would think of themselves more positively.”

She added: “I like being part of a team. I like that you get to work together towards a goal. I like getting to be team-mates with other girls who are also tough and competitive.”

Outside of school, Elin attends as many rugby events as possible and watches clips of her favourite players in action in order to pick up tips and new skills.

Since January, she has been fortunate to take part in training sessions with a real-life USA Women’s Eagle too.

USA prop and Third Grade teacher Charli Jacoby had relocated to Colorado from Chicago due to rugby when she was hired by Elin’s parents to tutor her brother, Anders.

It didn’t take long for Jacoby and Elin to start talking about rugby, and soon the pair — and several of the prop’s Eagles team-mates — were training together.

“I train with her a couple of times a week, she’s fierce and she is very competitive,” Jacoby said.

“We just came out here and did some simple handling drills and I was like ‘OK, this is actually too low-key for her’.

“She never wants to cut short and she’s always like, ‘go faster Charlie!’ and I’m like, ‘All right, I’ll try my best’.”

Elin added: “It’s fun, it’s a lot of work which is why I like it. I learnt [from Jacoby] that you should keep pushing yourself.”

Jacoby has recently moved to England in order to play for Loughborough Lightning in the Premier 15s, but the pair remain in touch and Elin makes sure that her friend is keeping up with her training.

Although she is still playing flag rugby, Elin believes her pace will make her a good winger in the future and she has ambitions to represent the USA at Rugby World Cups and Olympic Games.

Having won six test caps for the Eagles, Jacoby knows exactly what it takes to succeed on the international stage and has no doubt that her training partner can turn her dreams into reality.

“I know that drive that she has and the love for the sport already,” she said. “I truly see Elin achieving her goals of playing high-level rugby.”

In turn, having Jacoby’s support gives Elin the belief and confidence she needs to give rugby her all. “It makes me feel my dream is more likely,” she said.

Should Elin’s wish come true then one day she will lead out the USA for an Olympic gold medal match against New Zealand.

The Black Ferns Sevens have been her favourite team ever since they won in Glendale three years ago, beating the Eagles in thrilling fashion in the final at Infinity Park.

But, that does not mean that she would feel conflicted playing against them. “I’d really want to win because I know they’re good,” Elin insists.

Neither will she measure success solely by whether she achieves her goal of becoming a Women’s Eagle. Despite only being nine years old, Elin is already keen to pass on her passion for rugby to others.

“Rugby is super fun,” she said. “You get to be competitive and push yourself, and you get to meet likeminded people that become your friends.”

Who could argue with a sales pitch like that?