HOW RUGBY HELPED YOUTH UNSTOPPABLE JOHANNA ON AND OFF THE PITCH 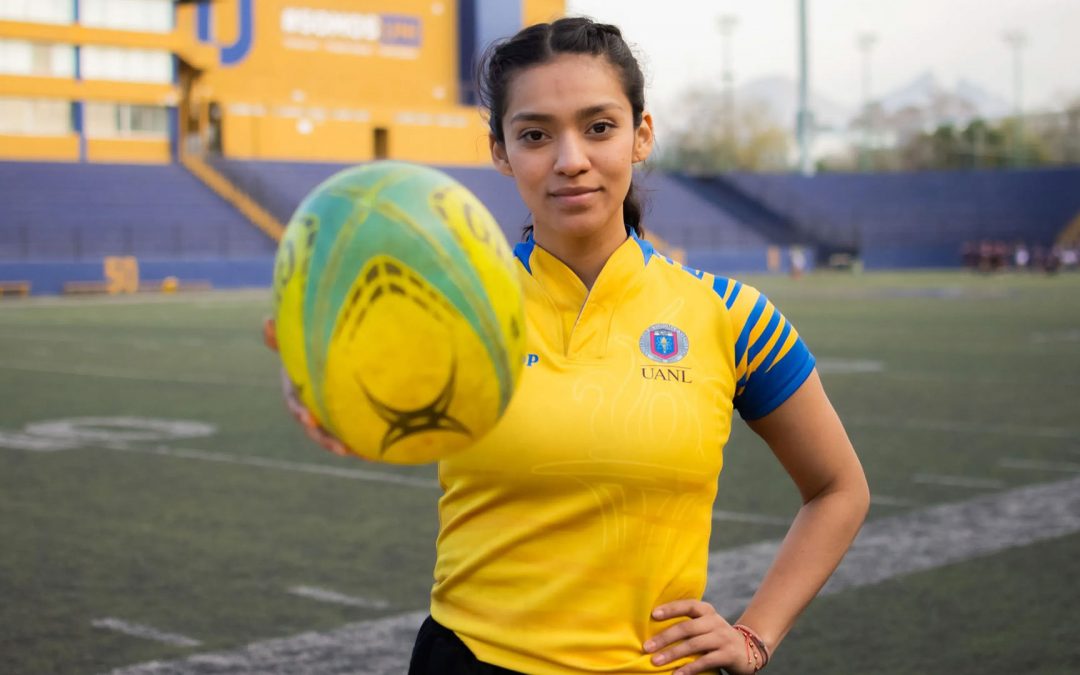 In October 2018, at the age of 16 and a student at the N22 high school in the Mexican city of Monterrey, Johanna discovered rugby thanks to an invitation from a friend.

Rugby was just beginning at her school, and it was a fairly unknown sport in her city.

Her family knew nothing about the game she was playing, and it wasn’t love at first sight for them; luckily it was for Johanna who immediately felt the impact of the new sport.

“I went with the feeling that if I liked it, I would stay,” the Youth Unstoppable told World Rugby.

Led by Refú Córdoba, her first coach, training was entertaining, and Johanna enjoyed it so much that she quickly “began to get more involved in the community”.

She played sevens, the only format available in her city for women, and was soon spotted playing a preparation game and elevated to the youth state team.

“I was 16 years old. That brought me closer to rugby, I began to know more about it, the union within the team and the values,” Johanna said.

“That was what I liked the most and made me stay.”

Meet our next #YouthUnstoppables, 19-year-old Johanna 👋

Since starting rugby at school, Johanna has grown in confidence and become a leader.

Winning over her family

It was not an easy start, as in her first tournament she had a minor concussion with a cervical sprain. In a family that did not yet know the benefits of rugby, they began to put up barriers and limits.

Over time, though, they realised she was good at it and passionate about sports. “That’s where the support started,” she said.

So big was the change in her family that her beloved grandmother, noticing her commitment and passion, bought her a scrum cap. It was a sign.

“I then felt that they were OK with me playing rugby,” Johanna said.

Quickly, she began to grow in her game, first with her state team and then with her college.

Studying Administrative Mechanical Engineering at the Autonomous University of Nueva León (UANL), her arrival coincided with that of COVID-19 and much of what could be done was no longer possible. Rugby continued, although not like she was used to.

“I kept preparing at home throughout 2020,” Johanna remembered. “In 2021, I continued training and in March they announced the return of rugby at the state U20 Olympics.

“Little by little we returned to action, preparation, friendly games with local teams and from other states.

“[Then] we became national champions.”

Shortly after that success, she joined Tigres from UANL and her abilities and great predisposition attracted the attention of the Mexican national coaches.

“A few months ago, we participated in the open university national championship and we lost the final,” she explains.

Learning on and off the pitch

Johanna’s goal is clear: “I want to keep playing, keep improving as a person. My goal is to represent my country.

“Rugby improved me, taught me values, to be responsible, to get out of moments of sadness, depression, anxiety. It made me realise that just as I can deal with problems in a game, I can solve things in my life.”

“I learned to be more supportive, to have discipline, more respect.”

She doesn’t just have her best friends in rugby. Her boyfriend Saúl is a player for Tigres and is in the state team.

“It was he who invited me to play rugby; back then we were colleagues and friends,” Johanna said. “We have been dating for two and a half years.”

Johanna plays fly-half in sevens and recently started rugby 10s this season, a clear growing step for the game in her city.

She is a player with good field vision and reading of where to attack. She also likes to run.

Rugby is so much in her DNA that Johanna does more than just play.

“I failed my first university entrance exam. In order to stay in the game of rugby, I became an assistant referee,” Johanna revealed.

“After a few months, I was able to retake the exam and I got in, so I was back in the team.”

Her love and passion for our sport led to her being chosen as a Youth Unstoppable in World Rugby’s campaign.

“I never thought deeply about why I am a Youth Unstoppable; what my story shows is that everyone can play,” Johanna said.

“My trainer Dolores Garza, who sent my story, told me about her pride and that as a state captain she would have more confidence to be a good leader and a good player. And she could also inspire other women.

“Having achieved things in rugby has given me confidence, but the reality is that rugby has taught me many things.”

Johanna was introduced to rugby just over three years ago when she accepted an invitation from a school friend in Monterrey, Mexico, to attend a training session.

Impressed with the camaraderie among the players – both male and female – taking part in the session, she instantly fell in love and soon was playing for her state’s youth team.

Her family were not quite as taken with the game as Johanna was, especially after she was injured playing in her first tournament. But her passion for rugby won them over, and her grandmother’s blessing arrived in the form of a scrum cap.

Two years ago, Johanna began studying at the Autonomous University of Nueva León (UANL), just as the COVID-19 pandemic began to spread across the globe.

She had to train on her own at home until things began to open up again in 2021 and the university team was able to return to the pitch.

Johanna did not waste any time in 2021, becoming a national champion, joining the Tigres club and catching the attention of national coaches in Mexico.

Rugby has helped Johanna both on and off the pitch, giving her the tools to cope with periods of depression and anxiety. “It made me realise that just as I can deal with problems in a game, I can solve things in my life,” she said.