Home triumph for USA in Glendale 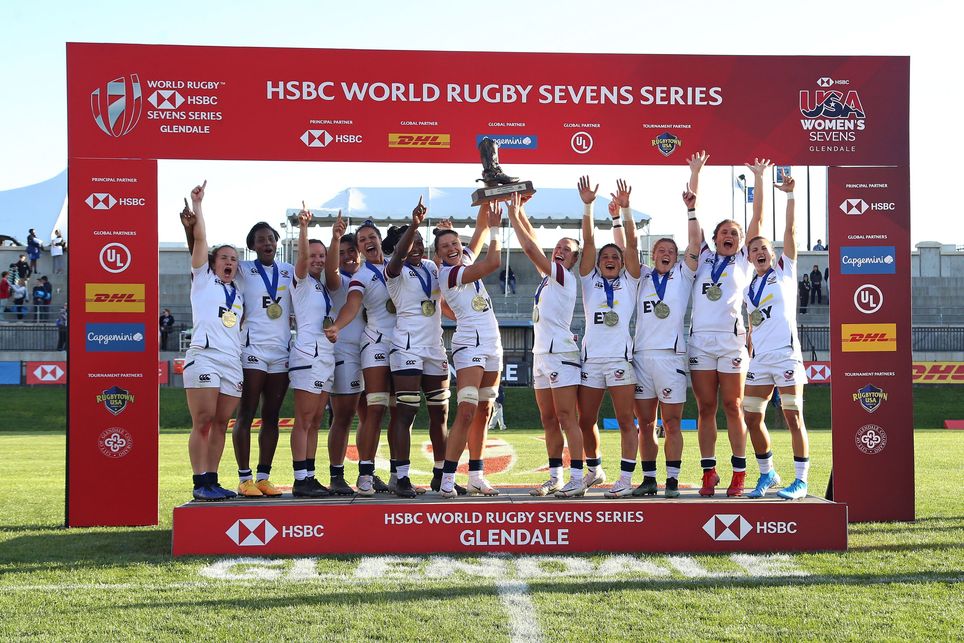 Nicole Heavirland ran in two tries as USA defeated Australia 26-7 in the Cup final in Glendale to triumph on home soil for the first time on the HSBC World Rugby Women’s Sevens Series.

Alev Kelter’s early try was quickly responded to by Ellia Green, cutting back inside from the left. Ilona Maher, named HSBC Player of the Final, gave USA back their lead before the break, before Heavirland’s double ensured the Cup would stay in the States.

The USA, who had been defeated by France on day one, become the third team, after Australia and New Zealand, to win consecutive titles on the series, having won in Biarritz in the final event of the 2019 Series. They were defeated by New Zealand in the Glendale final last year but made amends here.

“It feels incredible,” said captain Abby Gustaitis. “The home crowd, thanks to them. Numbers one to 12, all the girls back home, we wouldn’t have won without them. A shout out to all the staff as well for pushing us and believing in us. It’s been a huge 12 months for our programme, a few staff changes and bringing in girls. We continued to build on that performance from Glendale and we don’t want to be in that situation again.”

Maher added: “It’s been an amazing time. This whole tournament has been great for us. Last season we got second then kept progressing throughout the season and now I think we’ve worked so hard and it’s so well deserved. We never gave up on ourselves, even when we lost to France, we just kept going.”

USA had earlier pulled off a stunning result in the semi-final, eliminating New Zealand 19-17 in dramatic fashion. The hosts led through a Kelter try inside 17 seconds and were outstanding for much of the first half, keeping New Zealand in their own territory.

Stacey Waaka scored just before the break, with yet more imperious defending required afterwards with Cheta Emba sin-binned. After Shakira Baker’s score, Kristie Kirshe changed the game, scoring one try and setting up another before Waaka added her second in the final play. Kelly Brazier missed the conversion in an agonising defeat for the reigning Series champions.

USA had earlier been involved in another thriller against North American rivals Canada, Emba outstanding to win the game for the hosts. With her side trailing 22-26 in the closing seconds, she leapt to the sky to claim a restart, took it cleanly, and had a clear run to the posts for the winning score.

Australia made much lighter work of France, putting six tries past Les Bleues as they strolled to the final. Green ran in two first half tries either side of a score by Charlotte Caslick. Emma Tonegato scored her eighth and ninth tries of the weekend, first through a pinpoint run and then a charge for the corner, before Lauren Brown exploited a gap to complete victory.

They had also put six past Russia, with a brace each for Tonegato and Cassandra Staples ensuring a comfortable win. France won the day’s opening match, beating Spain 26-7 with Anne-Cécile Ciofani in complete control, setting up the opening try inside the first minute before scoring two of her own. Michaela Blyde’s hat-trick helped New Zealand see off Ireland 36-10.

New Zealand ended up with the bronze medal, beating France 31-14. They fell behind through Ciofani and Carla Neisen’s tries, but they hit back with two tries before the break and three more after it, Gayle Broughton pulling the strings with an outstanding dummy for their third try and a beautiful inside ball for the fourth.

Spain ultimately claimed fifth, beating Russia 24-19 in the semi-final before grinding out a 12-7 win against Canada in the play-off, Olivia Fresneda and Eva Aguirre scoring second half tries to overturn a deficit.

England took ninth place at Infinity Park, putting in a much improved performance from their 21-14 pool stage victory over Japan to win 36-14 against the same opponents. England had earlier defeated Brazil 34-14. Invitational team Japan had battled hard to beat Fiji in the ninth-place semi-final, finding themselves 19-14 down towards the end. Chiharu Nakamura dotted down with seconds remaining to send Japan through.

The next tournament on the HSBC World Rugby Sevens Series will be Dubai on 5-7 December, 2019, a combined men’s and women’s event.