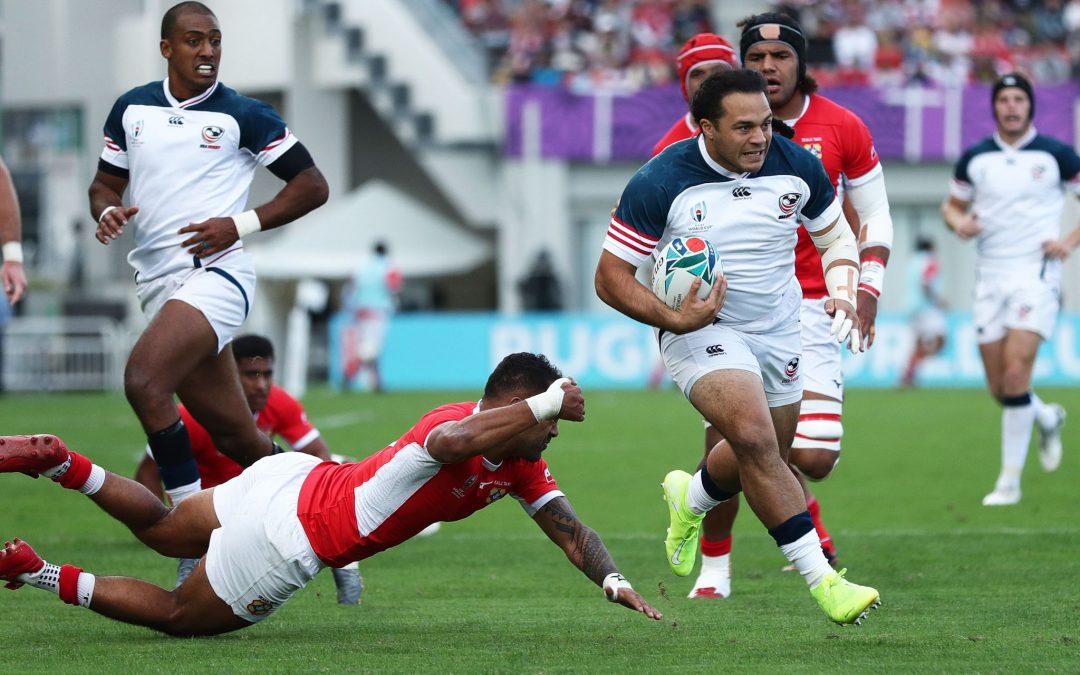 From the World Rugby U20 Trophy to the HSBC World Rugby Sevens Series and the Rugby World Cup, hooker turned full-back Mike Te’o admits he’s been on some journey.

With a smile as broad as his native Long Beach, Californian Mike Te’o is someone who always looks for the positives in life.

So while the USA failed to win a single game at Rugby World Cup 2019, having arguably peaked a year earlier when they reached an all-time high of 12th in the World Rugby Men’s Rankings, Te’o has nothing but fond memories of his Japanese experience.

“It’s always been one of my dreams to play at a World Cup, and that was my first. I remember back in 2011 watching the All Blacks win on TV, and I was like, ‘man, I want to play in that tournament’, and I got to do that eight years later,” he said.

“It wasn’t easy to get there, the journey that I had I definitely had to put trust in my faith and trust in God that I’d get the opportunity. Even though we lost all our games, I actually had fun.

“I was able to compete against England and traded jerseys with Anthony Watson. Man, that was pretty cool, and I scored a couple of tries against Tonga, that was probably the highlight of my tour.”

After an injury disrupted 18 months beforehand, Te’o was just happy to be there in Japan.

“I tore my ACL in March 2018, and that whole journey back, it took me nine months,” he explained.

“Once I got back, I was stronger and faster and fitter than ever been in my life and then I broke my foot, a month and a half before the World Cup.

“I had to have surgery and had to come back from that fast otherwise I wouldn’t have made it.

“I had to pass a late fitness test to make the World Cup team and I obviously did pretty decent. I hadn’t run since my injury but finished fourth or fifth in the tests out of all the backs.”

First capped by the Eagles in 2016 (at scrum-half), Te’o came through the Junior All-American pathway, competing in the World Rugby U20 Trophy 2012 on home soil in Salt Lake City as a hooker.

He scored five minutes after coming off the bench on his U20 debut against Chile and then followed up with a brace as the starting number two against Russia.

In the final, against Japan, a nail-biting 37-33 victory, he came on as a flanker. That was his swansong, though, as a forward. The following year, at the World Rugby U20 Championship in France, he played at centre and all 28 of his senior Eagles caps have been earned outside of the pack.

The thick-set full-back, who’s deceptively light on his feet, says the transition came about after his first foray into the USA Sevens set-up. Te’o appeared in nine tournaments on the HSBC World Rugby Sevens Series, from 2012 to 2013.

“Once I made the sevens team, I told them I don’t want to play hooker, I want to play in the backs. So I moved out to the wing and full-back, and it’s been great.”

Te’o has scored 16 tries in his test career to date and, at 26 years of age, still has plenty of time to become the Eagles’ record try scorer. He is currently joint fourth, with Vaea Anitoni out in front on 26.

Carlin Isles and Perry Berry, however, are out of sight in that respect in the sevens game.

“They’re both over 200 tries (for the world series) and I don’t think either of them would believe that would happen to them when they first started out.

“I’ve known them both since 2012. They are two of the best players to ever touch a rugby ball in sevens.

“It’s pretty awesome seeing how they live their lives on and off the field.”

GIVING UP THE OLYMPIC DREAM

Te’o is currently contracted on a short-term deal to London Scottish, the English Championship club where Isles once trained.

He joined the club a fortnight ago, having passed over the chance to play in the Tokyo 2020 Olympic Games with Team USA. But with all remaining matches postponed because of the COVID-19 pandemic, he won’t get the chance to play a competitive game for them.

“It was a choice between the Olympic dream or doing something I’ve always wanted to do – play in the UK or Europe.

“Mike Friday, the coach, and I had an agreement that if something came up before March, I’d take it, and if not, I’d stay on for the Olympics.

“Literally, a week before March this came up. Obviously I’d have loved to have played a couple of games but it’s not the end of the world.”