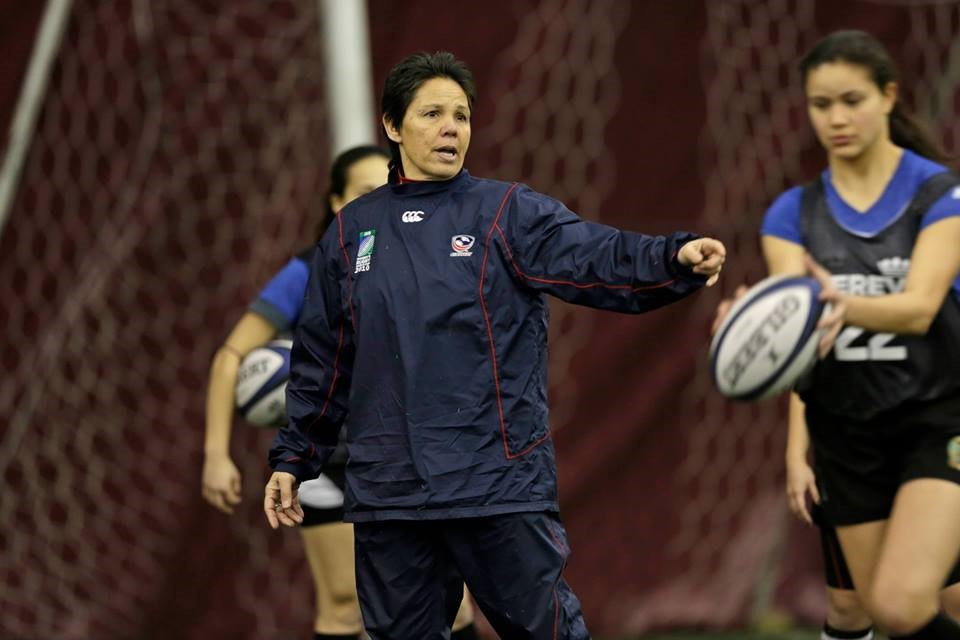 The following is a speech written by former USA Eagle and national team coach Kathy Flores and former Eagle Kerri Heffernan. The speech was delivered by Flores at the Rugby Americas North General Meeting in August 2017.

I would like to thank Mike Luke for inviting me to speak with you about the current landscape of women in the game. I’ve been involved in rugby for 35 years from my college days to captaining the first USA National Team and being a member of the subsequent World Cup team. I moved from playing to coach – coaching at many levels including the USA National Team, Women’s Premier League, women and men – and am currently one of the early NCAA coaches.

Throughout these 35 years much has changed – we’re all older and better looking – but in other respects little has changed. The area most resistant to change is the leadership structures of rugby governing bodies – and, as so few women are able to access leadership, women must continue to rely on men to represent our best interests…and your track record is not great!

But “still we persist”. As many of you may have noticed, the 2017 Women’s Rugby World Cup is attracting significant numbers of viewers:

Day 1 of the 2017 WRWC saw an audience of 330,000 and 880,000 from France alone for the FRA v AUS. On Day 2 the streaming servers from World Rugby Live went down during 2 matches that were sure to be runaways but proved otherwise: AUS v WAL and JPN v CAN.

In short, women are consistently asked to justify their existence to their national governing bodies.

I was a player in the first World Cup in 1991, I coached the 2002-2010 USA National Teams and I was the only World Cup woman Head Coach (which I believe is still true today). The World Cup has grown from an invitational tournament to one with a rigorous qualification process, live broadcast, robust attendance and an enthusiastic worldwide following. Yet women continue to struggle to find funding to train, to qualify, to travel. In short, women are consistently asked to justify their existence to their national governing bodies. While I appreciate being here, I can’t help but believe if this was the men’s World Cup, RAN would not have scheduled this meeting at this time. How many of you are considering attending the Women’s World Cup?

Have dated attitudes about the role of sport and the roles of women not caught up with the quality of the women’s game?

For as long as I can recall we – Women – have been told our participation in the game is not financially viable; that we are not marketable–but how can you sell a product if you don’t know it? If you have very little interest in it? The question is not whether men or women are marketable – but whether the will exists among the leadership to support the women’s game to the same extent they support the men’s game. Social media and live streaming have made all rugby accessible – the next step is finding ways to connect to companies who want to capitalize on rugby regardless of gender. For example, Eurosport, the pan-European broadcaster owned by Discovery Communications, has added the Women’s Rugby World Cup to its programming as it continues to bet on women’s sports to grow its audience. In the United States, NBC a major player in the telecommunications arena, has committed to rugby through 2023.

To be honest with you the obstacle to growing the women’s game is you – at every level men assume 99% of the leadership and decision making roles. The research from business and industry is clear, change will not occur until women occupy at least 35% of the leadership seats – are 35 or more % of decision making bodies. Not relegated to medical and education committees but 35 % or more of the governing boards.

I was recently part of a gathering of influential women in rugby – 50 women from the US who represented all levels of the game. Under the direction of United States Women’s Rugby Foundation, we spent 2 days laying the groundwork for a new organization, the Women’s Rugby Leadership Council whose vision and mission is to support girls and women in the game – we’re also building the Women’s Rugby Coaches Association, the first professional association for women coaches and referees in rugby. These 2 organizations are connected but distinct – both are membership organizations and should provide the women in the US with a large base of members. Our belief is there is power in numbers – that we will hold gathering similar to this but the audience will be overwhelmingly women – and then we can invite one of you to deliver a talk on the state of men’s rugby…

To reach that goal we’ve developed a set of guiding principles, established working groups and are networking. It’s energizing – our aim is not to create a separate NGO – we fully intend to partner with USAR (with the hope of stimulating like organizations in other unions) – but we are working to build a united voice – so that when we speak about the landscape of women’s rugby that we have the ability to capture the experiences, perspectives and voices of women players, coaches, administrators, referees and journalists. Our platform includes:

But this is 2017 and there should be more women in leadership and decision making positions. At the very least there should be a plan for the inclusion of women – a commitment to reaching reasonable inclusion – 35% – by 2018 and beyond.

I truly appreciate being here and I think it’s wonderful that Katie Sadleir, has been named World Rugby General Manager for Women in the Game, – you’re listening. But this is 2017 and there should be more women in leadership and decision making positions. At the very least there should be a plan for the inclusion of women – a commitment to reaching reasonable inclusion – 35% – by 2018 and beyond.

Some of you sitting in this audience are fathers. In the U.S. the story is that the involvement of soccer dads led to the explosion of women’s soccer. And to some degree we are seeing that with rugby. Dads realize that their daughters inherited their fathers’ athletic genes and dispositions – their daughters love the game, following them to practice and matches, their daughters have the vision, the skills and the drive. Yet – there are few if any opportunities for them to play – it’s tough when your children are denied opportunities you may have taken for granted. In some cases, dads step in – they organize youth leagues, coach, ref, administer and advocate – but I think what’s often lost in this story is how important it is for dads to also step back – for their daughters to move forward dads often must take a lesser role.

You may have to step aside to create greater representation for women. To ensure the future of women in the game of rugby some of you will need to give up your seats – not to lesser beings, not for the sake of diversity, you will need to step down so that talented women can assume leadership and create an organization that more accurately represents the entire landscape of rugby. It’s what good teammates do so the team can move forward.