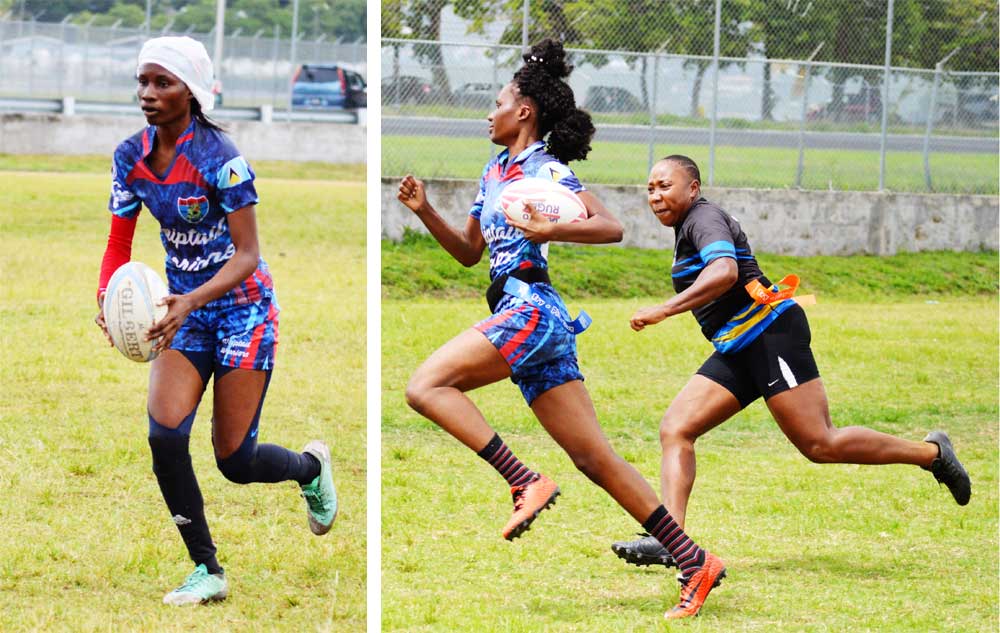 One of Saint Lucia’s lead female rugby players Mary Roberts, is someone to keep a close eye on. A former student of the Bocage Secondary School and Sir Arthur Lewis Community College (SALCC), her commitment to playing rugby could never be questioned.

For Roberts, sports provided an experience for her during her school life representing SALCC in the 400 and 800 meters races and became her “go – to” pursuit when she needed to let off steam.

A resident of Pavee, Castries Roberts is currently employed with EC Global (BOSL) on Bridge Street where she has been an administrative assistant for the last three years. She describes the rugby as “my little stress reliever”.

Interest: Mary said, “I never knew there was a Saint Lucia women’s team. I used to go to the field with one of my female friends on a Sunday morning to see her train with her team and from there I became interested and was introduced to the sport”.

According to Mary, “I might not be the fittest or quickest member of my team (Whiptail Warriors), but if I continue to master the basics as a winger I would be one up on my opposite number”.

On the pitch: I have been playing rugby for the last 42 months and my confidence has grown at every practice session and tournaments, I can pass a ball quite a few metres; I can take control and make a good decision,” she said.

Dreams: “My gold is to represent Saint Lucia at the 2024 Olympics, Rugby 7s in Paris, France, but before that, team Saint Lucia needs to quality”.

In essence, rugby has given Mary a sanctuary from the worries of her day to day life. It has provided control, which meant; she could take on the very best on any given day and earn her respect on the playing surface”.

Advice to the young aspiring players: Mary said, “Always be open to learning new skills and methods of doing things whilst developing your game. Be disciplined, fit and trusting your team mates make a hard game really easy”

VOICE: What do you think of her as a player?

Wayne: “She is a very dynamic player; she has lived up to the nickname “Lamborghini” given to her at the Rugby Americas North Olympic Qualifiers in 2019. She sometimes creates magical solo runs which stuns her opposition and even team mates”.

VOICE: As the SLRFU Technical Director/ Coach, are you satisfied as to where she was when you first saw her and where she is right now?

Wayne: “As a coach you always want your players operating at the highest optimal potential at games and tournaments. Mary has had consistency performance during 2018 – 2020 periods”.

Wayne: “She has been scouted by some universities but unfortunately due to eligibility criteria and personal issues she could not pursue those options. She would have gotten an opportunity to play on the USA Rugby 7s Club Series with the USA Roots Rugby team/ Village Lions Rugby Football Club based in New York, but due to Covid -19 pandemic this has been put on the back burner till 2021”.

He disclosed, “Progress going forward, I am trying to add more skill components to her game so she can become more lethal in out counterattack on teams”.

VOICE: What’s her role on the team?

Wayne: “With the changing up of the new team structure due to new players being added to the pool, Mary may become a utility player (moving from her pet position – winger), also giving her more room to explode the opponents weakness”.

VOICE: Is she in your setting for future games?

Wayne: “Yes, most definitely, she would be a staple on our team in our quest for qualification for 2024 Olympic 7’s once she keeps up the professional approach and meets all the selection criteria’s”.

VOICE: How far do you believe Mary can go in the sport?

Wayne: “As stated before she has the potential to play at the International level. I am trying to ensure she gets that opportunity and also be a role model and example to her peers and younger players joining the national pool”.