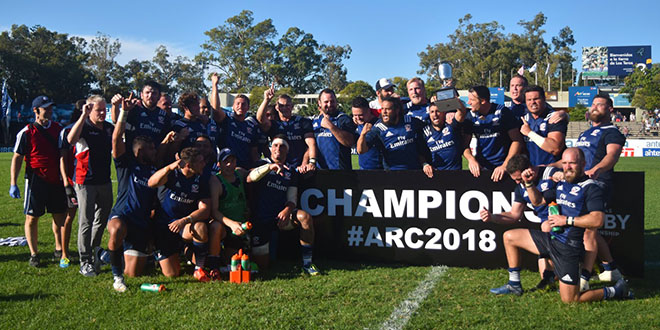 The hashtag #AméricaCrece – America Grows – encapsulated the third edition of the continental competition, with the sustained growth of teams such as USA and Uruguay, two nations that found their way to Rugby World Cup 2019. Canada would join them later taking a longer route.

The prestige of ARC meant that it was used as part of the qualifying process for Japan; the tournament opened in an historic game.
Los Teros reached the fantastic BC Place to shock Canada in the first of two games that would decide the second Americas place in RWC 2019.

‘Dibu’ Silva tore the home defense in the opening minute, leading the way for a 38-29 win by the Uruguayans.

A week later, not part of the tournament, Canada was again beaten by Uruguay in a dramatic game and Los Teros celebrated qualification to their fourth RWC.

That same weekend, the remaining four competing teams completed the opening round – Brazil beat Chile in Chile for the first time and USA beat Argentina XV in Carson. That night game, an early final, could have ended in a third consecutive draw between both sides, as the visitors lost the game driving for the ingoal in the final minute. The Eagles won 17-10.

With the hangover of having secured their ticket to RWC, Uruguay had to work hard to recover from being down 18-0 in Sao Paulo. They scored 27 unanswered points in the second half to seal the 27-18 win against Brazil.

Argentina XV sailed through their clash against Chile scoring seven tries and a penalty try at Ushuaia’s Agustín Pichot Stadium.
USA’s momentum continued by scoring four tries against a hard-hit Canada side in Sacramento and in the third round it was Chile that suffered the power of the Eagles in Fullerton – seven tries for the host that was fast running towards a second championship.

Argentina XV beat Uruguay 34-17 in Punta del Este and Canada vented its frustration against Brazil, a 45-5 win in Langford.

A week later, Uruguay continued its domination over los Cóndores with an outstanding 67-15, with number eight Manuel Diana scoring three of the eight tries.

The Eagles finally flew South and in Sao Paulo took advantage of three yellow cards of Os Tupis to ran away comfortable winners, being now one win away from winning the tournament.

Argentina XV stayed in the race, in the hope of Uruguay helping them in the final round, with a win against Canada 40-15 in Jujuy to close the fourth round.

Canada farewelled their tournament with a win in Chile, setting the scene for a later qualification to Rugby World Cup 2019 through the longer road of the Repechage, in November.

The fixture list meant that USA will decide the Championship in the final round’s second game. USA did not disappoint and secured their second consecutive tournament by beating Uruguay, at the Charrúa Stadium, by a big 61-19 win.

“USA’s win showcases the growth of the game in the continent,” said Sebastián Piñeyrúa, Chairman of Sudamérica Rugby. “The ARC project had the stated goal of seeing the sustained growth in America, underpinned by competition. The fact that Uruguay beat Canada to qualify to RWC 2019 showcases this.”

“The regions, the continent, is happy to continue working together to raise the standard.”