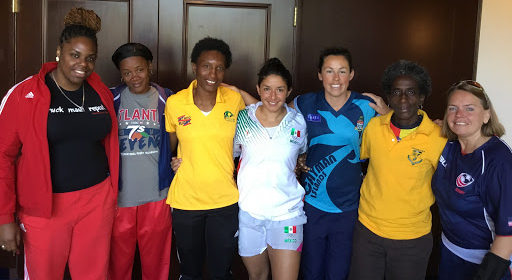 USA Rugby and Rugby Americas North welcome participants for the World Rugby Educators Course in Denver, Colorado today. The course will bring together coaches, referees, and strength and conditioning professionals in one training—a first of its kind for USA Rugby. The three-day workshop is part of the continuing development educators receive as part of the World Rugby’s Competency Accreditation Model.

Kenny Forehand, USA Rugby’s Director of Training and Education, has only been on the job since February, but already his goals and directive are clear—diversify the educator pool and thus better represent the rugby community at large.

“To me the weekend is a big step forward on several levels because this is the most diverse group we’ve ever put through. It’s also the first group in which we really pushed this diversity focus, and so it represents the starting point where our initiatives really take hold.”

Back in February when Forehand first came to the helm, a demographic statistic kept coming back to him. 41 million Americans are Spanish speakers and 11.6 are bilingual. At the time, the region offered little outreach to those individuals. A concerted outreach to females and people of color was also lacking.

Forehand and his department knew that for rugby to truly represent the diverse demographic of America and the region, action needed to be taken. What followed was a targeted outreach to all of the education streams of underrepresented groups in the current training and education landscape.

A focus on demographics wasn’t unique to Forehand. Diversity and inclusion are topics at the forefront of the world’s most pressing conversations, and World Rugby has woven the thread through much of its identity, which includes Solidarity and Respect as two of the sports centerpiece values.

“This weekend does represent that,” said Forehand. “We didn’t just talk about it or make press releases, we went out and said, ‘we want you involved’, and our membership responded. We still have work to do but it’s a starting point.”

The targeted outreach worked, and within 48 hours of opening the application process for the Colorado course, Forehand had 85 applicants. 25 were accepted for this weekend’s training and they will be joined by five trainers and four staff for a full three days of curriculum, analysis and collaboration.

Two of the five trainers this weekend are women. One of them is Lisa Rosen, a longtime coach and a World Rugby Trainer for the past five years. She’s also looking forward to working with the group that has been selected.

“I’m excited about the candidates,” said Rosen.  “There were a large number of applications, and the group that is coming are serious rugby people. This is also the first time we have done multi-strand educator training.  In the past trainers worked with coach educators, or referee educators in isolation. Now trainers from differing disciplines will work with all the educator candidates to share best practices and learn from each other.”

Two educators will be working towards their training license as well. Throughout the weekend Martha Daines and Dana Teagarden will be working on additional material with Forehand and Rugby America’s North Regional Training Manager, Mike Luke.

The course also welcomes two participants from the Caribbean and two bilingual Spanish speakers. Though it’s hosted by USA Rugby, nearby unions are also invited to the courses. In this way unions can share resources and ensure that all who are interested and qualified for a course are able to complete one.

With the move to combine educational streams, Forehand has focused on providing a “good solid educational base” in which participants will have a lot to take away whether they will be heading back home to educate coaches or referees.

“To me education is education and training is training no matter your focus,” said Forehand.

Though the methodology is broad, the rigor of the training focuses on specific goals for each participant. Even before arrival participants are given scenarios to work through and ultimately bring back to the sessions.

“Before they even come to the course they are given scenarios where they can understand their shortcomings. They should struggle with it. Ideally we challenge them enough where they struggle with the concepts and work through them.”

Forehand also mentions that the process of education doesn’t end after the weekend.

“Very few folks finish after this weekend. It’s a process that may take a year or two. This isn’t something we just give away.”

Ultimately, Forehand knows that it’s not just the process, moreso the people who are a part of it that will have a broad impact on how rugby grows and for whom. Jumping outside the rugby realm for a second, Forehand mentions some of the more recent tensions that have arose between cultural lines in the US .

“People focus on those bad things that happen in the US, but I think diversity is still our strength. It makes us great, and people in rugby are just starting to embrace that.”