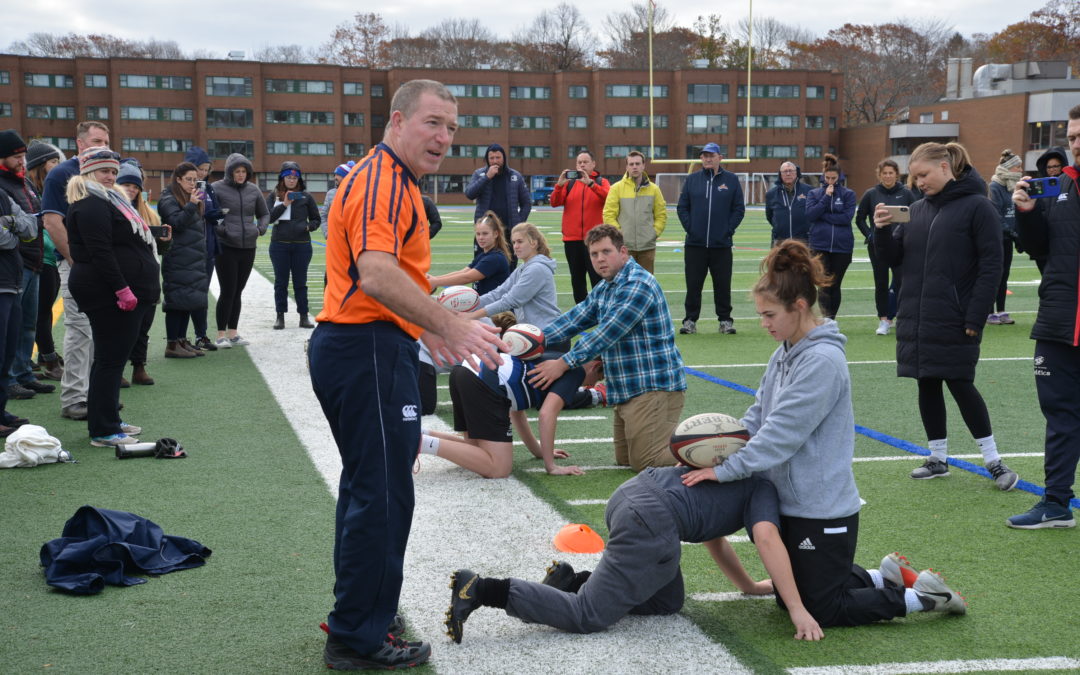 HALIFAX, NOVA SCOTIA – More than 60 coaches from across Eastern Canada gathered at Saint Mary’s University this past weekend to take part in the first-ever East Coast Coaching Conference.

While a variety of topics were covered over the two-day conference, the overall theme focused on player welfare which organizers say was a crucial issue to address given a trying year for rugby in Nova Scotia after the administrative body for high school sports instituted a short-lived ban last spring citing safety concerns. The ban was later lifted after major pushback from both the local and international rugby community, along with professional consultation at the administrative level.

“To do that we wanted to get everyone in the same room to talk about safe tackling, how we warm up and develop our fundamental movement skills with our athletes throughout the season and wanted to see coaches’ philosophies.

“Player welfare has always been our top priority, and was a crucial element of not only this weekend’s conference, but for Rugby Nova Scotia moving forward,” added Hanratty.

On Sunday morning, the attendees braved the chilly winter conditions as more than 30 Nova Scotia Keltics age-grade players were ran through the paces in a controlled environment regarding safe tackling with Rugby Americas North (RAN) Regional Training Manager Scott Harland.

“Rugby has always had an approach to safe tackling, however what we’re realizing is in North America especially we have players joining that don’t come from a rugby background,” said Harland.

“There’s all kinds of elements that go into a safe tackle – the squeeze, leg drive, body position –and you need lots of repetition. Sometimes as coaches we don’t have a lot of time to work on tackling, whether it’s limited facilities or time on field with our athletes before competition.

“This weekend we’re working on providing coaches with a variety of specific exercises that focus on different areas of the tackle – how to be tackled safely, falling properly, tracking – so that the players are best prepared for the entire tackle,” added Harland.

In September, World Rugby launched a major new injury-prevention program called “Activate” ahead of the Rugby World Cup 2019. Thesimple-to-implement exercise program is designed to reduce the risk of injuries in the game and contribute to player performance.

World Rugby’s Technical Services Director, Dr. Mike Hislop attended the conference to provide a run through of the modules and exercises.

“Activate is a pre-activity training program. It’s a series of exercises designed to be used as part of training and also pre-match warmups that can be delivered by coaches,” said Dr. Hislop.

“The idea is that by using Activate frequently throughout the season it’s designed to reduce injury risk in the game which is huge for us since Player Welfare is our number one priority at World Rugby. By reducing injuries in the game that reduces the amount of time players are away from the game, and potentially also improving their on-field performance as well,” he added.